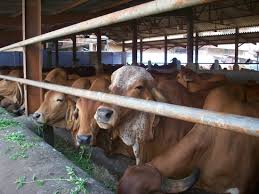 MEERUT: Midday meals (MDM) seem to be getting distributed to everyone else but school children in the district. Two days after an inspection revealed that students of a city school were not given meals for the past three years, the district programme officer (DPO), on Friday, seized 160 kg of MDM ration being fed to cows at a dairy. Police has detained owner of the dairy, Praveen Kumar, along with Kunwar Sain, husband of Uma Devi, an anganwadi worker at the school where the ration was supposed to be delivered.

DPO J P Tiwari said, “We conducted a surprise raid after receiving a tip-off that the MDM ration was being diverted to a dairy located at Yadnagar locality in the city. The raid was conducted along with Civil Lines police. The dairy owner Kumar and Sain have been detained. We have also recovered eight sacks of ration.”

According to police sources, the MDM was meant for an anganwadi centre at Abdullahpur, five kilometres from Meerut city, where Devi works. The ration supplier was also present in the dairy during the raid, informed officials.

Civil Lines station house officer Dheeraj Shuklasaid, “We have detained Kumar and Sain. They will be arrested once we receive a complaint in the matter. Devi will also be arrested if her name is mentioned in the FIR.”

The incident came to light days after students of Nanakchand Anglo Sanskrit (NAS) Inter College were found to not have received meals for the last three years. The NGO who was given responsibility had only started distributing biscuits to students from August 28. Subsequent inspections at two other inter colleges also found that very few students had been given MDMs.http://timesofindia.indiatimes.com/city/meerut/midday-meal-ends-up-as-cow-feed-in-meerut-dairy-two-held/articleshow/60703707.cms?twitterautopost