An Islamic militant group in Bangladesh has issued a hitlist of secular bloggers, writers and activists around the world, saying they will be killed if its demands are not met.

The list will raise fears that Islamic militant violence within the unstable south Asian country could take on an international dimension.

The targets in the list include nine bloggers based in the UK, seven in Germany, two in the US, one in Canada and one in Sweden. Some are Bangladeshi citizens living overseas. Others are dual nationals or citizens of the western nations.

The list was issued in a statement on the internet by the Ansarullah Bangla Team (ABT), a group that has been blamed for a series of murders of bloggers and activists in Bangladesh over the last 18 months. All those killed have been prominent critics of extremist religious doctrines, especially in Islam.

The acting leader of the ABT and two close associates were arrested earlier this month in Dhaka, the capital of Bangladesh, on suspicion of involvement in the murder of a secular blogger earlier this year.

Individuals on the new list have told the Guardian they intend to keep writing and blogging.

“Our weapon is [the] pen, and we can use it without hurting anybody. We just want to make people conscious about their rights. So that nobody can use them to fulfill bad intentions,” said Ananya Azad, a Bangladeshi blogger who has been forced into exile in Europe and is on the list.

There has been no previous indication that the ABT was targeting bloggers overseas and the list will worry security authorities in Europe and the US.

British-based bloggers of Bangladeshi origin named on the list have approached police in London and elsewhere following its publication. They say authorities have have advised them to take precautions to minimise the risk of attack.

It is unclear if the ABT has the capability to carry out their threats, but its call for action may prompt individuals to mount “lone wolf” attacks.

Police have charged an ABT organiser and four supporters with the murder of a 27-year-old blogger, Washiqur Rahman, in Dhaka in March.

The murder in February of Bangladeshi-born US citizen Avijit Roy, a science writer and blog moderator, prompted outrage around the world. His US-based widow is among those named on the new list the group appear to have issued.

Officials suspect the ABT is close to the Ansar ul-Islam organisation, which is part of al-Qaida in south Asiaand launched by the extremist organisation about a year ago.

The statement featured a logo comprising a black flag carrying the seal of the prophet Muhammad, often favoured by extremist groups, and the phrase: “We do not forget, we do not forgive” in English.

Al-Qaida has publicly praised violent operations by the ABT and has hailed activists charged with the murder of bloggers as “lions of the international community”.

The new list is accompanied by an incoherent demand to strip bloggers of their citizenship. It appears to be addressed to the government of Bangladesh’s prime minister Sheikh Hasina, though many of those on the hitlist have dual nationality or are citizens of Britain, the US or European nations.

“Cancel the Bangladeshi citizenship of enemies of Islam and [Muslim religious] education, atheists, apostates, unbelievers, anti-Islamic … bloggers, agents of India … otherwise they will be killed wherever they can be found in the Almighty’s world,” said the statement.

The origin of the list is unclear, and some have doubted it is an official statement from the ABT in Bangladesh, but instead compiled or published from the UK or elsewhere in the west.

More than 150 writers, including Margaret Atwood, Salman Rushdie, Yann Martel and Colm Tóibín, signed a letter condemning the series of fatal attacks and calling on the government of Bangladesh “to ensure that the tragic events … are not repeated”.

Authorities in Dhaka have been previously criticised for requesting local bloggers and activists to avoid provocative statements on sensitive religious issues.

Human Rights Watch, the international campaigning group, last month called for the government “to recall that its duty is to uphold the constitution and protect people’s lives, as well as their religious freedom”.

“It’s shocking that Bangladesh authorities not only failed to protect the bloggers despite complaints to the police about threats against them, but instead are proposing self-censorship,” said the spokesperson. 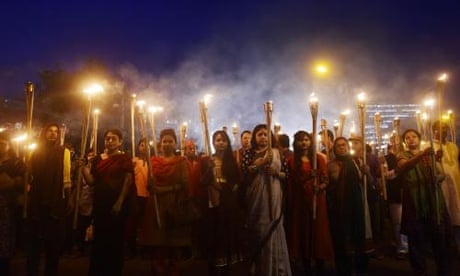 Bangladesh is an officially secular country, but more than 90% of its 160 million people are Muslim. It gained its independence from Pakistan after a brutal civil war in 1971, which left deep scars. In recent years a new surge of extremism has exacerbated long standing tensions between conservatives and secular liberals.

Those on the list say they are aware of the dangers of their activism. “I can’t give you assurance that I can’t be hurt here also. Fundamentalists have threatened that they will come and kill me,” said blogger Azad.

“I can’t say that I am fully safe, as the fundamentalists know where I am residing. I can’t say what will happen in future, but I can give you this assurance that I will write until the end of my life.”