The incident took place either late on Monday night or in the early hours of Tuesday. 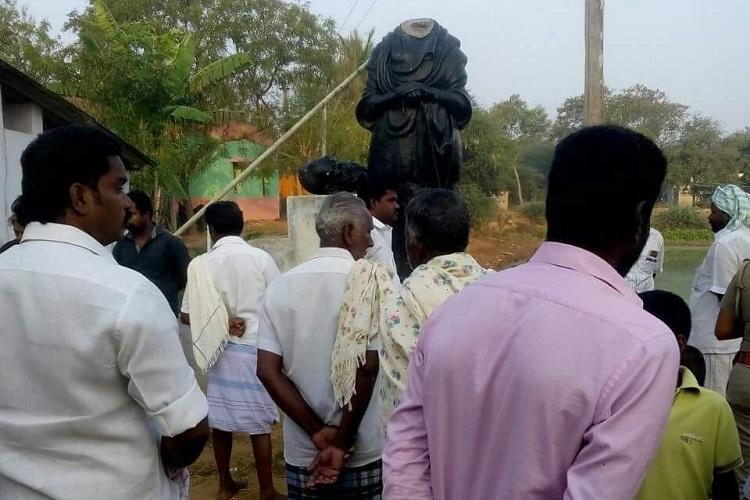 The incident took place either late on Monday night or in the early hours of Tuesday.

A policeman at the Alangudi DSP office said, “The police received information about it at 6:15 am on Tuesday, after a local called the Deputy Commissioner’s office on seeing the broken head.”

The police visited the spot and are looking into the incident. A large number of locals have also gathered at the site. The police are yet to register a case.

When asked about the possibility of the miscreants being caught on camera, the police said that there was no CCTV footage yet. Further details are awaited.

Earlier in March, BJP leader H Raja had stoked controversy by threatening to vandalise statues of EV Ramasamy. Raja’s comments came after BJP workers razed a statue of Lenin in Tripura after the party won the Assembly polls in the state.

Within 24 hours, a statue of Periyar was vandalised in Vellore district’s Tirupattur town.

Two men, Muthuraman and Francis, damaged the glasses and the nose of the statue. The police arrested them immediately.

The fallout of this incident was almost immediate. Within hours, petrol bombs were hurled in a BJP office in Coimbatore. Four members of TPDK were arrested for this.

Following this, protests erupted across the state, with students getting into a scuffle with cops in Madurai. Over 300 people were detained across Tamil Nadu.

After receiving heavy criticism, H Raja deleted the post and claimed that it was put up by an admin and not by him, and expressed his ‘heartfelt regret’ for the post.

India has a flawed notion of mercy #deathpenalty
Greenpeace India’s registration cancelled
It’s Time to Put an End to Maharashtra’s Love Affair with the Law of Sedition
Hounding minorities: Why Church authorities are 'officially' silent on recent attacks