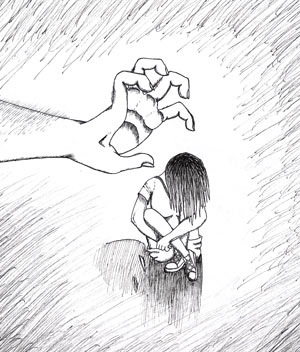 Mathura: A girl from Alwar village in Rajasthan, who had been missing for past two months, has been found after she was allegedly raped and tortured by her two abductors.

According to police, the girl was abducted on June 23 by two boys from her village soon after she arrived in Mathura with a group of women for pilgrimage at Govardhan.

While the ‘Parikrama‘ (circumambulation) was in progress, the two boys – Randip and Narendra – took her to an isolated place and allegedly raped her. For almost two months, she remained in their captivity and was repeatedly raped. She was also allegedly beaten with iron rod if she refused to comply with her abductors.

Fearing arrest, the two boys tried to get rid of the girl on August 17 by sending her off on in Ajmer-bound train.

On reaching Ajmer, the girl narrated her ordeal to the personnel at the Government Railway Police (GRP) station.

A case was immediately registered and then transferred to Govardhan police station in Mathura.

The girl has reunited with her parents and they have demanded immediate arrest of the two accused. The police are on a look out for the two boys.

Does Sharma want Akhlaq's daughter to thank the mob for not raping her? #Vaw
Forty years after the Emergency - Dissent and democracy
Appeal of the “Indian Muslims for Democracy” to all Muslim Brethrens on the occasion of Eid ul-Adha
SOLIDARITY FROM INDIA - Release the five feminist activists immediately! #Vaw