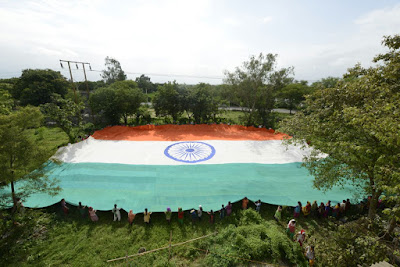 By Our Representative
In an unusual move, seeking to give the impression that there is no reason to believe the democratic space in India is shrinking, as being argued by activists, the Gujarat government has given permission to state Dalits to take out a silent rally from Nani Devti village in Sanand taluka to Gandhinagar, the state Capital, on Friday. The rally, to be led by top Dalit rights activist Martin Macwan, will be taken out in order to hand over India’s “largest-ever” National Flag to Gujarat chief minister Vijay Rupani.
Addressing media at the Dalit Shakti Kendra (DSK), the Dalit empowerment centre he founded 18 years ago near the upcoming industrial hub, Sanand, in Ahmedabad district, Macwan said, “We had demanded appointment to meet the chief minister about a week ago.”
However, as the chief minister would be “unable to receive the National Flag, it has been agreed that it would be handed over to the district collector, Gandhinagar”, a top government source said.
Macwan said, “We had given in writing to the Director-General of Police, the chief minister’s office, as also the Ahmedabad district collectorate and the district police chief that we would like to meet the chief minister in person.”
Till Thursday afternoon, as no permission was received, making Macwan and his colleagues apprehensive. “Does the chief minister not want to show respect to the National Flag, which the Dalits have designed?”, Macwan wondered.

The 125 feet long, 83.3 feet high National Flag, made of khadi clothe, has been designed and coloured by 100 DSK students and teachers, who worked on it for the last 25 days. Macwan had planned to take the flag in a rally to Gandhinagar on August 11.
The silent rally to Gandhinagar would pass through the Gandhi Ashram on August 11 with the participation of hundreds of Dalits from across Gujarat, before reaching Gandhinagar.  Martin had warned, if no permission was given, the silent march was in any case be taken out. 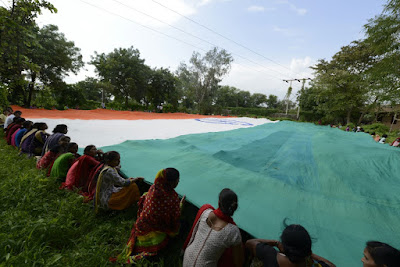 The rally is proposed to be taken out under the banner of Abhadched Mukt (or Untouchability Free) Bharat: Mission 2047. As many as 1,500 women and men, a Dalit communique said, would gather at the Dalit Shakti Kendra, Nani Devti village, on August 11 for the silent march. They belong to 125 talukas of 26 Gujarat districts.

The choice of the National Flag, which is 10,500 sq feet wide and has a 25 ft x 25 ft Ashok Chakra, was made, said Macwan, because, apart from other things, it symbolizes the constitutional obligation of removing untouchability and equality before law.

“It was decided that the flag would be made of khadi clothe, because khadi is known to be woven by Dalits”, he said, adding, “The 24 spokes of Ashok Chakra in the middle symbolizes one of the principles Gautam Buddha, of social equality.”
Along with the National Flag, the activists wanted to hand over to the chief minister a memorandum, placed in a big sized supda (winnowing basket), which is usually made by the Dalits’ Valmiki community to earn a livelihood in villages. The memorandum has a one-liner demand: Enter the name of one village which you have declared untouchability free on the occasion of the Independence Day.
Significantly, on Wednesday, senior farmers’ activist, Sagar Rabari of Khedut Samaj Gujarat, decided to take his supporters to a Maharashtra farmers’ and tribals’ rally across the border of South Gujarat, because, he told Counterview, he has been failing to get any permission for protest rallies in Ahmedabad or Gandhinagar.
Earlier, pro-quota leader Hardik Patel, too, has not been permission for protest. “This has become a norm in Gujarat”, Rabari said.
http://www.counterview.net/2017/08/mission-untouchability-gujarat-cm.html

Most extremists in India are not Muslim – they are Hindu
Mukul Sinha, self-effacing Modi opponent and labour organiser who disliked being called a leader
Ray Of Hope For Dangaria Tribals and litmus test for Odisha govt
Second wife can avail of DV Act benefits: Bombay HC