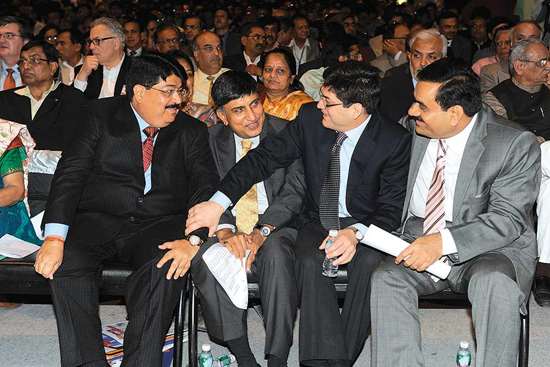 During the Vibrant Gujarat summit in 2011, Gujarat chief minister Narendra Modi was seen being venerated by the bigwigs of Indian industry, from Ratan Tata to Mukesh Ambani, for his grand vision of dev­elopment. It figures. The development model has increasingly come to be skewed in favour of capital-intensive mega industries.

This is evident not just in project allocation but also in terms of resources, be it finances, subsidies, land or natural wealth. If Adani tops the list of Modi’s favourites in popular perception, the Ambanis, Tatas, Essar, Torrent Power follow closely. Many like Welspun, Zydus Cadila, Nirma, Lalbhais etc are giving way to others as front-runners for subsidies that are huge by any standard, whether capital subsidy, interest subsidy, infrastructure subsidy, sales tax and now VAT subsidy. The capital is being provided at just 0.1 per cent interest with an average of a 20-year moratorium on repayment, stretched in some cases to over 40 years. Besides land, water and other natural resources come at throwaway prices.

A rough calculation of the subsidy the Tatas effectively got to set up their Nano manufacturing plant in Gujarat pegs it at around Rs 33,000 crore, say local politicians. “Historica­lly, the Gujarat model was to promote smes in backward areas, but over the years premier, prestigious and now mega industries are being promoted in the state. Starting from the Tatas’ Nano project, the share of subsidy and incentives has become tilted in favour of mega projects—the greater the investment, the greater is the rate of subsidy,” says Prof Indira Hirway of the Centre for Development Alternatives, Ahmedabad.

Because competitive forces do not dictate the allocation of resources, favours determine the slice of the cake. This has resulted in the suboptimal allocation of resources. As capital has become cheaper, it has become more profitable for corporates to go in for capital-intensive industries with little emp­loyment generation. The huge outgo in corporate and infrastructure subsidies has also meant few resources are left for social development, whether health or education.

“Modi seems to practise a lot of crony capitalism, but knows very little about capitalism, which involves liberalism and spiritualism—none of which applies to him,” says Rajiv Desai, CEO of Comma Consulting.

Industrial growth in Gujarat, going by the  last two audit reports of state psus by the Comptroller and Auditor General, is coming at a high cost to the exchequer. In 2012, the CAG took a critical view of the Modi government’s mismanagement resulting in losses of over Rs 16,000 crore.

In the case of the state-owned Gujarat State Petroleum Corporation (GSPC), the audit report is critical of “undue benefits” extended to favoured corporates like Adani Energy and Essar Steel. The report points out that GSPC purchased natural gas from the spot market at the prevailing prices and sold it to Adani Energy at a fixed price much lower than the market price, benefiting the latter to the tune of over Rs 70 crore. To Essar Steel, the corpora­tion extended undue benefits of over Rs 12.02 crore by way of a waiver of capacity charges, contrary to the provisions of the gas transmission agreement.

Again in 2013, the CAG took a critical view of state public sector undertakings extending undue favours to Reliance Industries and Adani Power Ltd (APL). It highlighted a loss of Rs 52.27 crore due to a retweaking of the gas transportation agreement (GTA) with RIL for transportation of D6 gas from Bhadbhut in Bharuch district to RIL’s Jamnagar refinery.

In the case of Gujarat Urja Vikas Nigam Limited (GUVNL), over Rs 160 crore was lost by not levying a penalty on APL for violation of the power purchase agreement.

Experts point out how major projects in the state are increasingly being captured by a few favourite industrial groups, which have been witnes­sing faster than their average growth just a decade back. Paying the price is the aam aadmi. Take the sale of CNG in Ahmedabad. It’s more expensive than in Delhi despite the fact that most of the gas is transported via pipeline to the capital from Gujarat. A reason assigned by the locals is that the cng vending stations are largely operated by the Adanis.