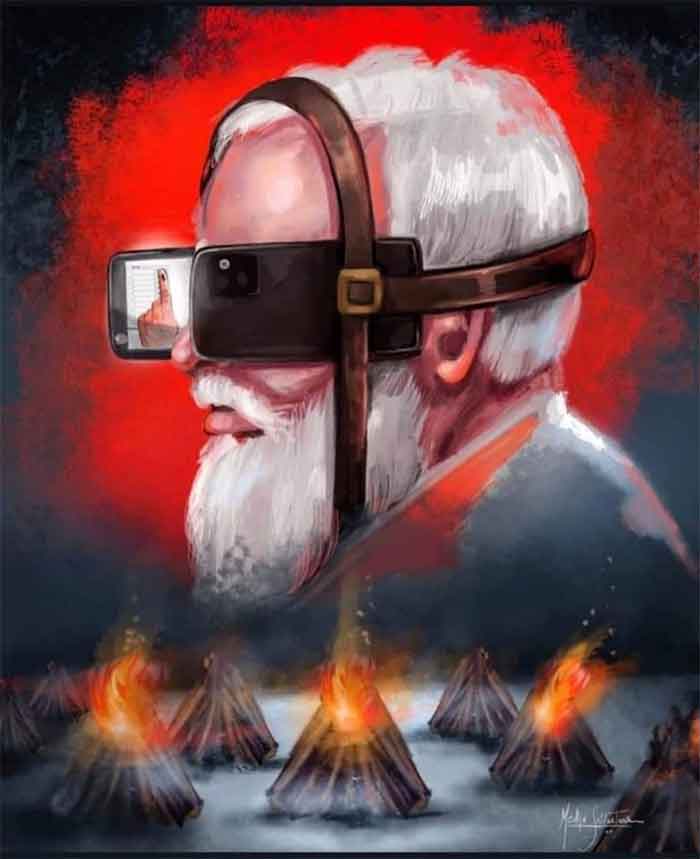 No one is malicious and mean enough to believe that Modi has knowingly caused the death of lacs and disease to millions. He has done his best to prevent them but failed. He failed because his priorities were wrong and he lacked far-sightedness. He took no step in time to prevent the infected to enter the country and spread the disease and death.

His priority was to give a Royal Reception to his friend Donald Trump in February, 2020 and to topple the Congress government in M. P. to install his own. His obsession with expanding power and his vote bank blinded him to the disease and death he was inviting and spreading.

The obsession with winning the election in W. Bengal led to the electioneering, which had to be a super-spreader. Still more criminal was permitting 3 to 4 million Hindus to gather at Haridwar for the Mahakumbh. The devotees, who had come for the holy dip, returned not only with God’s blessings but the life taking disease. Unlike the election meetings in Bengal, the devotees carried the disease to all the nook and corner of the country.

Modi has an obsessive mind. He has proved incapable of considering the pros and cons of the consequences of his decisions and suffers from a blindness typical of a megalomaniac.

His other trait is Narcissism: Exclusive love for himself and obsession with building his image. He did not care to analyse and understand the opinion of the experts. His success in fighting the first wave though at wholly avoidable cost (of sudden and unplanned lockdown) blinded him to the future danger.

At Devos, he proudly boasted of his victory against the pandemic believing in his own mistaken view. Secure in the belief that he had really won the war against the pandemic, he freely distributed our vaccine to different countries without retaining enough for our own people. Now, when we are struck and are facing the second wave, we are moving literally with a begging bowl all over the globe.

Our people are dying like flies. They are not dying because they must but because Modi made mistakes and is now unable to save them as a consequence. The people were not vaccinated. There are no beds in hospitals. There is no oxygen to keep them breathing and alive so that they might be saved. There are no ventilators. They are dying not because they cannot be saved but because the government is unable to save them. Had there been a competent PM most of them would have been alive today.

The people are not only dying because of government’s failure, they are being denied even a respectful last rites. The people are compelled to throw the dead bodies of their fathers, mothers, brothers, sisters, sons and daughters here and there because there is no place in the crematoria, there is no wood for their pyre, there is no transport to carry them for their last rites. Hundreds have been just thrown in the Ganga, Saryu and other rivers.

Can any amount of propaganda generate positivity? Positivity can be generated only with hope, a only with confidence that the tragedy is being overcome and better days are ahead. But it is not possible with a failed Modi at the helm. What can inspire hope and lift spirit? A belief that Modi has become a different man! Visionary and competent. History has no example of such transformation. Programmes and policies change but a person does not. And a person incapable of making right judgment cannot choose right policies and programmes. Modi can neither end the tragedy nor can inspire hope. There can be no positivity without a robust hope.

The only way to create ‘positivity’ is for Modi to make way for a more positive and competent person.

The RSS has planned to hold a webinar for creating ‘positivity’. A deceptive name for a propaganda in favour of Modi.

Shocking Indifference to the Plight of Project Affected Persons in Narmada Valley
PRESS RELEASE -#Aadhaar number not compulsory for online application of scholarship for minority stu...
Rape And Institutional Murder Of A Minor Dalit Girl In Rajasthan #Vaw
I am eager to live: Irom Sharmila #AFSPA