Did Prime Minister Narendra Modi, during his chief ministership of Gujarat, encourage the much abused cow vigilantism, which allegedly is terrorizing minorities and Dalits across India? It would seem so, if the new report, “Lynching without End”, published by a civil rights network, Citizens against Hate, is any indication. 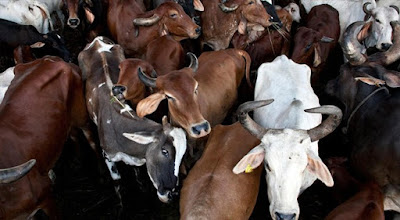 Prepared under the leaderhship of Aman Biradari Trust, which operates under IAS bureaucrat-turned-activist Harsh Mander, the report, to be released on October 2, the Gandhi Jayanti day, says that between 2011 and 2014, the Gujarat government “disbursed Rs 75 lakh in cash rewards to 1,394 vigilantes for raiding illegal cattle transporters and filing FIRs against them.”
Modi, who ruled Gujarat between 2001 and 2014, resigned as chief minister in May 2014 to become India’s Prime Minister in the wake of the BJP’s resounding victory in the Lok Sabha elections under him.
Claiming that these figures are officially available on the Gujarat government’s Gauseva and Gauchar Vikas Board (GGVB) website, the report says, “The GGVB was set up under the animal husbandry department in 1999, but remained defunct for almost a decade before Modi revived it in 2010.”
The report, which has been prepared with the help of several other civil rights organizations, says that the GGVB was given “some steel” by Modi, “who introduced a slew of schemes, including a cash reward of Rs 500 for every FIR registered against cattle smugglers and transporters.”
Pointing out that “there was even a biennial Best Cow Protector award worth Rs 25,000”, the 61 page report suggests, ever since Modi left, the state government has continued to take a belligerent attitude towards cow “protection”.
Thus, it adds, “in March 2017, Gujarat amended its cow protection law to make the slaughter of cows punishable with life imprisonment.” The stringent law was alleged to have been made to further “empowering private cow protection groups.”
Other organizations which helped prepare the report include Anjuman Islamiya, Ranchi; Quill Foundation, New Delhi; Misaal, New Delhi; Yuva Ekta Jagruk Manch, Nuh, Haryana; and Afkar India Foundation, Shamli, Uttar Pradesh.
While there are 24 out of 29 states in India which “currently have various laws on cow protection”, taking “inspiration from Article 48 of the Indian Constitution that mandates the state to prohibit the slaughter of cows and calves and other milch and draught cattle”, the report says, most states are inspired by the “landmark judgment” of Supreme Court in October 2005 upholding “the constitutional validity of these anti-cow slaughter laws.”
Accusing all BJP-ruled states in the so-called cow belt of going strict on cow slaughter after Modi become Prime Minister, the report shows, how the Haryana government’s “commitment to cow protection” particularly became “strong.”
“It has set up a 24-hour helpline for citizens to report cow slaughter and smuggling. It has also appointed police task forces to respond to the complaints, headed by a senior police officer”, the report, which is the result of fact finding investigation of lynchings and vigilante violence, conducted through July 2017, states.
“In the absence of official data”, the report states, it had to “rely on private sources” on lynching incidents, especially on the recently-created dataset –the Hate Tracker – on hate crime, defined by the source as “acts of violence, threats of violence, and incitements to violence based on religion, caste, race, ethnicity, region of origin, gender identity and sexual orientation”.
Based on content analysis of English media, the report says, it includes “the India Spend portal records 63 incidents of bovine-related attacks, over an eight year period (2010-2017, up to June 25), in which 28 persons died, and two were raped.”
“The attacks included mob lynching and violence by vigilante groups. Muslims were the target of 51 per cent of the violence, but comprised 86 per cent of those killed. Dalits were the target in 8 per cent of the attacks, Hindus 14 per cent, Sikhs 5, Christians 1”, the report says, adding, “In 20 per cent of cases, religion was not known, or not mentioned.”
“Notably, 97 per cent of these cow-terror attacks were reported after Modi’s BJP took power in the centre, in May 2014”, the report says, adding, “Just over half of the cases of cow-related violence – 32 of 63 incidents – were from states governed by BJP, when the attacks were reported.”
“Bovine related attacks are widely spread out across the country – reported from 19 of 29 Indian states, with Uttar Pradesh (10), Haryana (9), Jharkhand (6) Gujarat (6), Karnataka (6), Madhya Pradesh (4), Delhi (4) and Rajasthan (4) reporting the highest number of cases”, the report says.
http://www.counterview.net/2017/09/modi-as-gujarat-cm-encouraged-cow.html