Modi Charms Chinese Kids With Selfies, But At Home…

Brinda Karat
What is it about this Government’s approach towards women and children? Even as images of the Prime Minister’s China trip show Narendra Modi charming Chinese children with selfies, back in India, just before the scheduled trip, he had presided over a cabinet meeting which gave approval to legalise labour of children in India below the age of 14, in “family enterprises.”

Will our Prime Minister be equally proud in showing off selfies with our poor and emaciated children bending over packets of bidis they are being forced to bind in “family enterprises” which he has legalised? 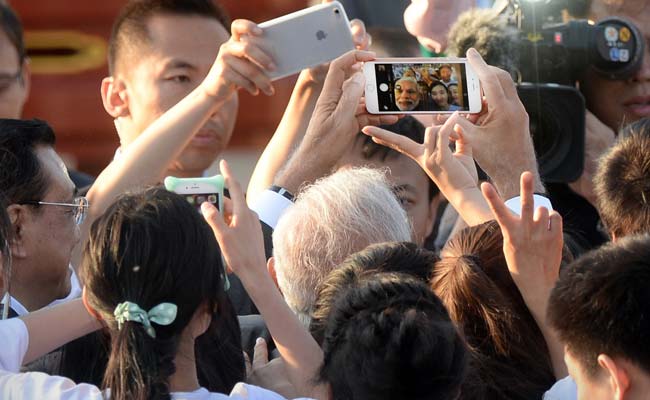 India and China became independent within two years of each other. At the time, each country was beset with the scourge of poverty, inequality and brutal exploitation. It is not as though China does not face social and economic problems today. But the Chinese Government, which has ensured the universal right to free education for its children many decades ago in pursuit of socialist goals of justice, which has legislated against child labour, will not now in the 21st century come out with a law which legalizes child labour simply because it still exists in pockets of that country. It is expected to display the political will required to completely eliminate such a cruel practice as depriving a child of her childhood.

In India, on the other hand, the Union Cabinet has given approval to introduce a retrograde amendment in the law against child labour, to legalise the labour of children upto the age of 14 in “family enterprises” after school hours and during vacations. It is unthinkable that a Government which claims to be “development” oriented should seek to destroy the development of India’s children, allowing the exploitation of the labour of children below the age of 14. To suggest that “poverty and the social fabric of India” justify the use of child labour is to punish children for their poverty, a poverty created by the policies of successive Governments.

As is well known with the trend of outsourcing, many developed industries farm out work to contractors, who further farm out work to families who work round the clock at exploitative rates. This is in addition to other trades such as bidi-making, agarbattis, carpet-weaving etc. where children have been made to work. Instead of taking measures to incentivise families in poverty to end the practice of putting their own children to work, the Modi Government wants to legalise it. Since it is almost impossible to regulate “family enterprises”, such an amendment will open the floodgates for the rampant use and abuse of child labour.

Make in India is yet to create jobs. But in the meanwhile, if Made in India is going to include Made in India Legally by Child Labour, it will be a travesty of justice. Citizens should use all means available to make sure this does not happen.

But this is not the only blow against rights and interests of children. Earlier, the budgetary allocations for schemes run by the Ministry of Women and Child Development suffered a cut of over Rs. 10,000 crore in the first full budget of the Modi Sarkar. Soon after, the Government moved an amendment Bill in the Lok Sabha to the Juvenile Justice Act to have minors between the ages of 16-18 tried as adults for heinous crimes. It is true that it is abhorrent that a 17-year-old accused, and then convicted of say, for example, rape, gets let off in a year when he turns an adult, since clearly a year is hardly enough for him to undergo the process of reform. But there are other ways within the JJ Act itself which can be used to monitor and assist him in processes of reform including in separate half way homes. Many women’s and child right organisations have made practical suggestions within the framework of the JJ Act which the Government has chosen to ignore. The problem is that India has not invested in the social and physical infrastructures mandated by the law to assist and help children and minors in conflict with the law, a large majority of whom are from poor and deprived families.

Instead, the Government seems determined to push them into adult jails and ensure that chances of reform become all the more remote. Fortunately, the Bill is yet to be discussed and adopted in the Rajya Sabha, and if there is strong enough public opinion mobilized against this amendment which was rejected by the Verma Commission as well as the Parliamentary Standing Committee, perhaps the Government will see some sense.

Meanwhile let’s at least try to stop the legalisation of child labour whether in the name of family or not.