Modi on a nuclear shopping spree, with Manmohan Singh’s old bag in his hand

If untamed inflation, cries of corruption and impunity of ministers with serious criminal cases were not enough to give us a feel of continuity with the last government, the new Indian PM’s foreign visits would definitely provide us with the familiar air of the Congress government. On the sidelines of the ongoing BRICS meet, Modi has invited Vladimir Putin for a visit to Koodankulam in December this year when the second reactor in Koodankulam is supposed to be started. Earlier this month, Narendra Modi assured the French Foreign Minister Laurent Fabius of no rethink on the Jaitapur project where France’s nuclear giant Areva has been contracted to set up the world’s largest nuclear power park. Modi is expected to visit Japan soon to finalise a nuclear supply agreement. Later in September he will be visiting the United States where again furthering nuclear commerce would be a highlight. 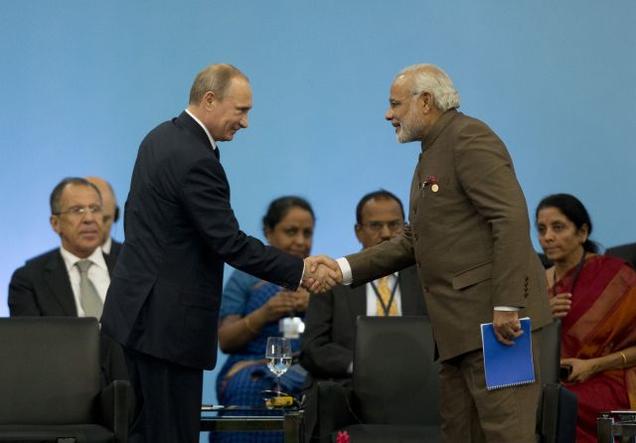 While in the opposition for last ten years, Modi’s party criticised the old government’s nuclear policy. Although the party was not against nuclear power plants or international nuclear agreements as such, but it did support specific objections raised against the nuclear projects the Congress government was implementing. It strongly objected to the Government of India’s attempts to exempt foreign suppliers from nuclear liability, calling it a blatant capitulation. The Bharatiya Janata Party(BJP) also strongly opposedIndia signing the IAEA’s Additional Protocol, based on its own nationalist logic that such an intrusive inspection will deny the country of the required flexibility in maintaining a credible deterrence. However, the Modi government ratified the same Protocol Agreement soon after taking charge.

In 2010, the BJP had sought a review of the environmental clearance given to the Jaitapur project on the eve of the visit of the then French president Nicholas Sarkozy. Not only the cost of the same reactor has gone thrice higher since then – more than 50 billion euros, the Fukushima accident has exposed the inherently unforgiving nature of the nuclear technology forcing a reversal of nuclear programs in several countries. The particular design being set up by Areva in Jaitapur – the European Pressurized Reactor (EPR) has come under intense criticism from the regulating agency STUK in Finland where the same design is being constructed in Olkiluoto. Even the French regulator and the auditor have castigated Areva for its design being too expensive. In a joint statement at the start of this year, the nuclear regulators of France, UK and Finland jointly issued a statement asking Areva to improve the EPR’s safety system. The three agencies have been issuing such calls since 2009. In India, the same unsafe design is being set up with additional risk factors like non-independence of the nuclear regulator, increased adverse impacts due to dense population and seismically sensitive geology which the government has overlooked.

Same with the Koodankulam project in the southern India. In 2011, the BJP believed that people’s objections and fears over Koodankulam are valid and genuine. The Manmohan Singh government neglected the serious questions about the safety, environmental impacts, effects on the local community’s livelihoods, absence of liability provisions for the Russian suppliers, the scam in Russia pertaining to the supply of sub-standard equipments in which a director of the company was arrested, and brutally repressed the local people’s massive peaceful agitation. But now the BJP government under Modi has done a nuclear u-turn and its government is not just enthusiastic about Reactor No. 2 in Koodankulam, but also about agreements for reactor no. 3 and 4 with Russia, for which the Russian company Atomsroyexport has demanded an exemption from Nuclear Liability Act, duly passed by the Indian parliament.

Modi will also be visiting Tokyo in the end of August to finalise a nuclear supply agreement with Japan. This deal has been long pending despite immense pressure from the nuclear industry inside Japan, and also the nuclear lobbies from US and France whose proposed projects are being delayed in India. While the two nuclear giant of the US – GE and Westinghouse – have now majority stake from Hitachi and Toshiba, the French Areva’s EPR design being set up in India would also require crucial components supplied by Japanese companies. Even before Fukushima, the peace groups and Hibakushas in Japan have been opposed to the agreement as it sets a bad precedent: India has not signed the NPT and CTBT and has conducted nuclear tests, supplying it with more technology will encourage newer countries to go for atomic bombs and then renegotiate their international status.

In June, the Modi government ratified the IAEA’s Additional Protocol, much to the consternation of the hawkish international affairs pundits who would have wanted Modi to follow their grand strategic vision. They lamented that the Protocol has closed the loop on the nuclear deal, making any further thermonuclear tests much more expensive diplomatically and in terms of the energy disruption – supply of fuel and technology for all imported reactors would be discontinued in case of a test.

But more curiously, the industry mouthpiece like ‘The Economist’ found in it an opportunity to push their own agenda: the dilution of nuclear liability law in India. The magazine advised Modi to use his hefty majority in the parliament to ammend the liability law passed by the parliament in 2010, as it is a ‘deterrent’ for the global corporates, putting ‘heavy financial responsibility on suppliers and contractors in case of an accident.’ The Economist urged Modi to move fast on this and revise the Act before the budget session, and definitely before the new PM’s visit to Washington in September this year. 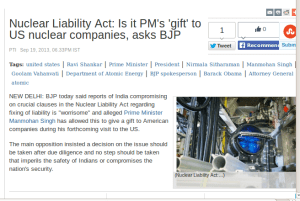 The Section 17(b) of the Civil Liability for Nuclear Damage Act, 2010 allows the nuclear operator, the NPCIL, a right to recourse against the supplier in case of an accident. the nuclear industry globally. This clause ensuring limited hook on the suppliers could be inserted into the Act by the sheer coincidence that the discussion in the parliament took place around the same time when the Supreme Court verdict on Bhopal generated heated debates around the indemnification of Dow Chemicals. However, the government subsequently did every effort to dilute the suppliers’ liability – by introducing clauses in the law necessitating a prior mention of the liability provision in the bilateral contract between the supplier and the operator, and later more nefariously by inserting product liability period of just 5 years in the Rules designed under the Act for its implementation. Eminent jurist Soli Sorabjee termed the Rules “ultra vires” of the Act and going against its spirit, when Greenpeace sought his legal opinion on the issue. The US has kept up the pressure on India to amend the liability norms, even during the recent courtesy visit of Nicholas Burns to warm up to the new administration in India. Japan has also sought similar changes in the law. Will Modi now pander to the corporate interests and dilute the suppliers’ liability by amending the law, and offer his own version of the perfect gift to the US during his visit?

Nuclear issues have been a wild-card in the Indian politics in the recent years, affecting quite a few unexpected turns. Manmohan Singh who as a Finance Minister discouraged nuclear energy in the early 1990s for economic reasons, found merit in the same for political reason during his bonhomie with George W. Bush’s America. The former PM got so obsessed with the nuclear deal that he put his government at the stake in 2008 and also allegedly even struck a deal with the BJP to loosen the CBI hook on Narendra Modi who was then facing serious charges of abetting communal violence in Gujarat in 2002. It would not be surprising if Modi uses the nuclear chip to enhance his stature with the US and other international powers looking for a pie in India’s nuclear market.

It appears that India’s anachronistic push for nuclear energy in the face of global shift away from nuclear power after Fukushima is evidently independent of any domestic regime change and reflects the consensus of the ruling elite to use its own people’s lives and ecological risks as a bargain chip at the international stage. If there were any doubts because the Bharatiya Janata Party(BJP) had opposed the India-US nuclear agreement in the parliament when it was in the opposition, its newly formed government has put an emphatic end to them. Both in terms of squandering the lessons of Fukushima and repressing the dissident voices on nuclear issues, Modi will run faster with the torch he has inherited from his predecessor.