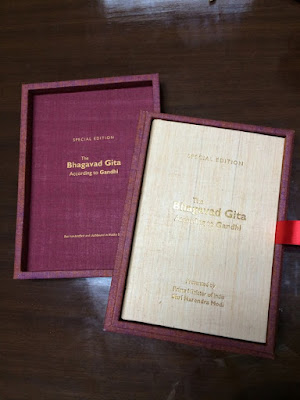 By Our Representative
Just one day ahead of Prime Minister Narendra Modi‘s second meeting with President Barack Obama in US, Mahatma Gandhi‘s secretary Mahadevbhai Desai‘s grandson has made a serious allegation against Modi – that the Bhagwad Gita‘s version Modi presented to Obama during his previous visit was actually authored by his grandfather. Yet, Modi not only changed the title, he even removed Mahadev Desai’s name.
Mahadev Desai’s grandson Nachiketa Desai is one of the senior-most journalists of Gujarat who is currently working as consulting editor (political) with the United News of India, and has been associated with Swaraj Abhiyan, the breakaway group of Aam Aadmi Party.
He has said in a Facebook post, “During his visit to the US as Prime Minister, the Bhagwad Gita which Modi presented to Obama was actually written by my grandfather Mahadev Desai.” He added, the “truth” is that Modi presented Obama “with a doctored version of my grandfather’s book.”
He goes on to say, “Its cover was changed, so was its name, in order to come up with a ‘new’ book. The original title of the book was ‘The Gospel of Selfless Action or The Gita According to Gandhi’, and the one that was presented to Obama was ‘Bhagwat Gita According to Gandhi’. Even the name of the author has disappeared.”
Nachiketa Desai comments, “This is like pasting ‘College’ on ‘Colgate’.” Calling him “Feku” (pretender) without naming him, the journalist says, the Prime Minister is “not just guilty of befooling the people of India by selling fake promises, he also befooling US president Obama.”
The photographs released by the journalist show that Mahadev Desai’s book was published by the Navjivan Publishing House, Ahmedabad, founded by Mahatma Gandhi. The author’s name is there on the book. However, the Bhagwad Gita presented by Modi to Obama calls it “special edition”, with the following wordings, “Presented by Prime Minister of India Narendra Modi.” There is no name of Mahadev Desai on the cover. 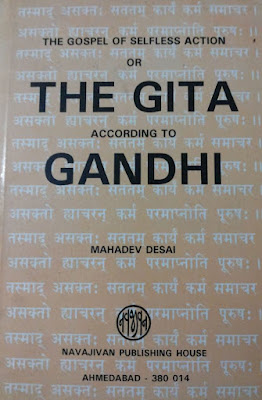 Modi presented Bhagwad Gita to Obama on September 30, 2014 during the dinner hosted at the White House. On gifting the sacred book, Modi had said, India’s guiding philosophy was inspired by Buddha and Mahatma Gandhi as far as India is concerned. “We believe in non-violence,” he had added.
Nachiketa Desai’s exposure comes just a week after the Government of India refused to part with any details about Bhagwad Gita presented to Obama under the right to information (RTI) plea by RTI activist from Ahmedabad, Roshan Shah. In reply to Shah, the Ministry of External Affairs says, “No information is available.”
It added, the ministry is not supposed to give information on the basis of queries which are actually inferences and assumptions or which seek to interpret them, hence the application is “disposed of.” Shah had sought information on who was the author of the “Bhagvad Gita book presented to Barack Obama by Narendra Modi?, Who was the publisher of this Bhagvad Gita book?”, and “did Narendra Modi add any forward inside the book?”
The applicant further asked the ministry, “Was the book title changed from its original title? Was the author or publishers permission taken by PMO before changing the title? Please provide copy of the bill used for purchase of the book. From which store/organization was the book purchased? Who recommended to present the book to Obama?”
The applicant went on to add, “Who all approved to present the book to Obama? Who all read the book in PMO before it was offered as gift to Obama to ensure that there was no vulgar language in it? Did the book underwent security checks before it was presented to Obama and at which locations?”, and finally, “What is the ISBN of the book?”