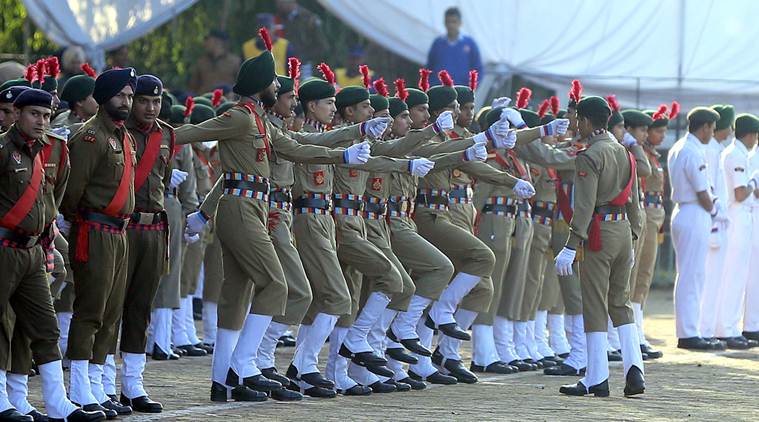 The incentives include a fixed stipend for the 12-month training and making N-YES an “essential qualification” for jobs in Defence, paramilitary forces and police. In addition to military training, those enrolled will be taught vocational and IT skills, disaster management and Indian values though yoga, ayurveda and ancient Indian philosophy. (Express photo by Sahil Walia/File)In the name of having a “disciplined” and nationalist “force of youth,” the government has discussed a proposal to target 10 lakh young men and women every year with a military training programme, The Indian Express has learnt.

Billed as the National Youth Empowerment Scheme or N-YES, aimed at “optimising the Indian demographic advantage”, it proposes a slew of incentives to students fresh of Class X and XII and, currently, enrolled in college. The incentives include a fixed stipend for the 12-month training and making N-YES an “essential qualification” for jobs in Defence, paramilitary forces and police.

Sources confirmed that a meeting on the proposed scheme was called by the Prime Minister’s Office (PMO) in the last week of June and was attended by representatives of the Defence Ministry, Department of Youth Affairs and Human Resource Development Ministry.

A presentation on the same was made by an officer of Defence Ministry. A senior PMO official did not respond to a message.

Sources added that reservations were said to have been raised by some officers about N-YES during the meeting following which another suggestion was made to strengthen the existing National Cadet Corps or NCC, instead.

According to the proposal, the scheme will instil values of nationalism, discipline and self-esteem into the youth, which, in turn will help make India a “Vishwaguru” (read a universal leader) and achieve Prime Minister Narendra Modi’s vision of New India 2022.

In addition to military training, those enrolled will be taught vocational and IT skills, disaster management and Indian values though yoga, ayurveda and ancient Indian philosophy.

The above is envisioned as a year-long programme targeted specially at youth in rural areas and women. To finance this scheme, it was proposed that the government could use the existing budget meant for NCC and National Service Scheme (NSS), funds available with the Skill Development Ministry and also MNREGA funds.

The military training programme has been proposed at a time the Opposition has launched an attack on the union government for not creating adequate and appropriate job opportunities for the youth.

This, however, isn’t the first time that the PMO has broached the topic of instilling discipline and nationalism in youngsters.

As first reported by The Indian Express on July 21, 2017, the PMO last year advised the department of school education, under the HRD Ministry, to include elements of military schools (Sainik Schools) — aimed at promoting discipline, physical fitness and a patriotic outlook — in regular schools too.

The ministry is learnt to be currently working on introducing Sainik School features in seven Navodaya Vidyalayas on a pilot basis this year.

WRITE BACK: Focus on strengthening NCC and NSS, says Govt

“The report aims to sensationalize the whole matter by twisting facts and is devoid of reality. The Government strongly denies the sensational misrepresentation made in the report. The fact is that a meeting was held in PMO to revamp the National Cadet Corps (NCC) and National Service Scheme (NSS). Ministry of Youth Affairs, Ministry of Human Resource Development and NCC, through the Ministry of Defence, participated in the discussion. The discussion was mainly focused on taking measures for strengthening NCC and NSS and how the youth could be empowered through these institutions…

It has been decided to set up a committee under the chairmanship of Shri Anil Swarup, the then Secretary, School Education, with suitable representations from NCC, Ministry of Youth Affairs and Ministry of HRD to suggest measures to strengthen NCC & NSS. The committee is expected to touch on issues like expansion, strengthening training infrastructure, rationalizing resources, reducing manpower deficiency affecting NCC and NSS.”

The PIB statement confirms that a meeting was held in the Prime Minister’s Office, as mentioned in the report on the proposed National Youth Empowerment Scheme (N-YES). According to the statement, the discussion was focused on strengthening the NCC and the NSS. In fact, The Indian Express report mentioned that after reservations were raised, “another suggestion was made to strengthen the National Cadet Corps or NCC, instead”.

As for details on the 10-lakh “force of youth”, that was based on the proposal titled ‘National — YES’. This was circulated among the ministries represented at the meeting held in PMO.

On Monday, an SMS was sent to a senior PMO official informing him about the N-YES proposal, but no response was received.

The Invisible Reality of Rape in India #Vaw
Maharashtra: Goof up on Bhagat Singh’s picture
Silence of IOA and mystery of two Indians at Glasgow #Vaw
Anti-national Rohith to Mother India son Rohith: why the shift