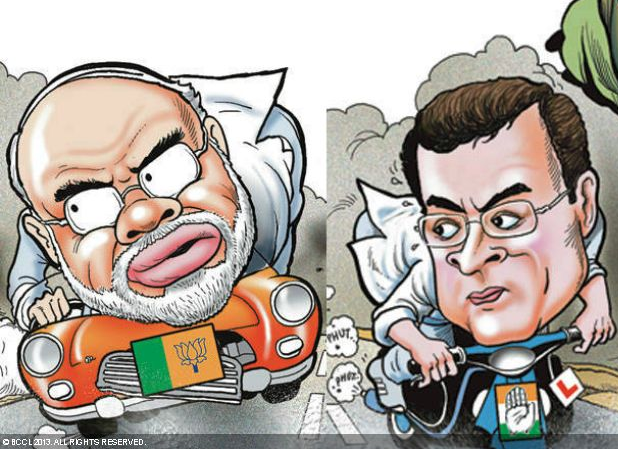 MADURAI: For BJP, he is the icing on the cake, their star leader, criss-crossing the country to campaign, hoping to assume the PM mantle. But, in Tamil Nadu‘s hinterlands, few have heard of Narendra Modi.

Ask 55-year-old C Veerayi, a former BJP ward member from Avanyapuram, a suburban Madurai village, about Modi and her diffident reply is, “What is it? An object? An ailment?” In nearby Perungudi village, V Pandi (58), who recognises it as a name, says, “I don’t know him… Is he from the north?”

Few know about him or have heard of him in villages in Tamil Nadu. Thanks to the Election Commission’s stringent norms, there are no wall posters or banners of the PM aspirant to mar the pastoral scenery. But, in remote hamlets, few walls of huts, adorned with party symbols, even the lotus, miss the EC’s hawk eye.

In Sivakasi, the fireworks town, M Ravi (42) runs a tuck shop and sells newspapers. He has put up a poster of a Tamil journal, known for its Modi leanings. It proclaims, “For change, Modi is necessary.” But, Ravi says he has never heard of Modi.

T Palaya Nadar (80) of Kamarayapuram village in Virudhunagar district still does the odd job for a living. As the mid-day sun blazes down, Nadar, a Congress member, joins the group of idle gossipers at the local tea shop. No, he hasn’t heard of Modi, but he knows Atal Bihari Vajpayee well and, of course, Congress PM aspirant Rahul Gandhi. “This election, the lotus symbol stands a better chance nationally,” he says.

Interesting though, it is in this belt that the pro-Modi campaign has been most aggressive. DMDK leader Vijayakanth, campaigning for ally and NDA’s Virudhunagar candidate MDMK leader Vaiko in the region, hailed Modi as “ven thaadi vendhar (white bearded King)”, an honorific used for Periyar (E V Ramasamy), the patriarch of the Dravidian movement. P Arumugam, who heard Vijayakanth’s campaign in the constituency, has no clue who or what Modi is.

But, all is not in vain for the saffron leader, who has campaigned thrice in the state. There is a growing fan club for him among the youth, even in villages. In remote Karambayam village in Thanjavur constituency, where the inter-state Cauvery water dispute had the worst impact, a group of first time voters see prospects for BJP. N Manikandan (24) has returned home from Singapore where he works as an A/C mechanic to cast his vote. Cauvery is not an issue here any more and the real contest is between DMK heavyweight T R Baalu and his AIADMK rival. But, Manikandan’s vote is for Modi. “We want change,” he says.

In Kanisery Pudur, which falls within Virudhunagar constituency, an AIADMK leader has heard about Modi but nurses the dream of his party leader becoming deputy PM. “If Modi has a better chance of becoming PM, then we hope Amma (AIADMK chief J Jayalalithaa) will become his deputy,” he says.