The CM is blissfully unaware how all roads are shut to public once he and other VIPs are on the move.

Both Prime Minister Narendra Modi as well as Uttar Pradesh chief minister Yogi Adityanath may not tire making tall proclamations about bringing an end to the “VIP culture”.

Modi has even gone a step further by claiming that he believed in ushering in a new culture — EPI (Every Person is Important).

But that was not how things work in India’s most populous state of Uttar Pradesh. One would be absolutely naïve to believe that mere removal of red-beacons from the vehicles of the “VIPs” was the end all.

Every VIP in Lucknow and other parts of Uttar Pradesh made it a point to not only remove the prominently fixed red-beacon from vehicles, but some also went to the extent of making huge public display of shedding their most-visible “VIP” tag in the form of the red beacon.

UP deputy chief minister Keshav Prasad Maurya was one of those, who went out of his way to ensure that a picture, showing him actually pulling out the red-beacon from atop his vehicle, was duly carried by prominent local dailies. But he was quick to promptly replace the red-beacon with a huge red flag that has been dutifully propped on his pilot vehicle. As if that was not enough to announce his arrival, he also has a loud hooter blaring out of his vehicle, which is usually part of a motorcade of at least half-a-dozen vehicles. 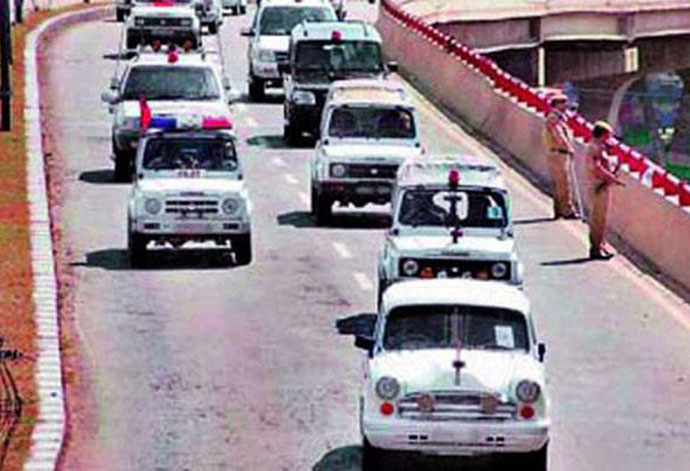 In the name of security, all roads are shut to public once the CM is on the move.

Maurya‘s urge to carry the VIP tag first came to the fore on day one, when he went on to occupy the chief minister’s chamber on the fifth floor of the Secretariat Annexe, while another room was allotted to him in the old Vidha Bhawan.

No sooner than this was brought to the knowledge of CM Yogi Adityanath, he decided to make a personal visit to the building under the pretext of a “surprise inspection” of the offices there. However, the actual reason was to let Maurya know that the chamber was one of CM’s designated offices, which he would be using. Maurya quietely moved to the room allotted to him. To cover his guilt, he went about explaining to all and sundry that he had occupied the Annexe chamber of the chief minister on the presumption that the chief minister had shifted his office permanently to the new Lok Bhawan, built by former chief minister Akhilesh Yadav at a cost of Rs 600 crore. In fact, Yogi Adityanath had spent his first day in the new Lok Bhawan office only. But Maurya could not explain why he chose to abandon the chamber actually allotted to him and instead without authority walk into the fifth floor of the Annexe building, traditionally well-known as CM’s office.

A far as displaying the new “VIP” label was concerned, Maurya was not the only member of Yogi’s cabinet to be doing so. Several others were seen moving in long motorcades marked with giant-sized red flags jutting up from the side of the car bonnet and blowing high-decibel hooters, which are surely a bigger source of public nuisance than the silent red beacon. Barring a dozen of the 45 ministers, who move with one pilot and an escort vehicle, the rest were enjoying the luxury of at least 4-6 vehicles in their motorcade.

For that matter, even Yogi Aditynath continues to follow Akhilesh’s legacy of a long motorcade of 12–17 vehicles. Interestingly, Akhilesh Yadav often took pride in declaring how he had scaled down the chief minister’s motorcade of 30-34 vehicles (during Mayawati’s time) to 17–20 vehicles . It was only after Aam Aadmi Party’s Arvind Kejriwal re-wrote the “VIP rules” that Yadav reduced his motorcade size to half. But what he smartly did in the bargain was to quietly replace his Ambassadors with Mercedes SUVs .

Then, in the name of security, all roads are shut to the public once the CM is on the move. In fact, traffic is stopped well before the arrival of the CM’s motorcade and the cops just slip away minutes after the motorcade is gone, leading to utter chaos about which the CM is blissfully unaware.

He is equally oblivious of the brute force used by cops to slam lesser mortals — be it cyclists or cycle-rickshaw pullers still struggling to move out of the VIP’s path.