Mona Eltahawy- I swear to make the patriarchy uncomfortable. And I’m proud of it. 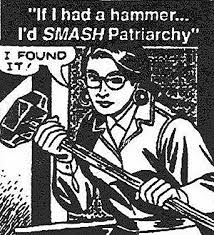 Profanity is an important tool in defying, disobeying and disrupting patriarchy and its rules.Hanna Barczyk / for NBC News

Editor’s note: This piece has been edited in accordance with NBC News editorial policy. The editors appreciate the irony.

Filthy. Disgraceful. Indecent. Vulgar. That is what the powerful and their enablers will call you if you dare poke them in the eye by actually doing what you were invited to do — roast the rich and powerful at the White House Correspondent’s Dinner — rather than what women are expected to do from birth: play nice.

On April 28, comedian Michelle Wolf let loose a bipartisan evisceration on beltway politicians and media (tellingly, the notoriously thin-skinned President Donald Trump did not attend). After peppering her speech with several swear words as well as references to sex acts and genitalia, Wolf was criticized by an uneasy alliance of both supposedly free-speech obsessed conservatives and supposedly free-speech obsessed journalists. The hypocrisy was hard to miss.

“I think sometimes they look at a woman and they think ‘Oh, she’ll be nice,’ and if you’ve seen any of my comedy you know that I don’t — I’m not,” Wolf told NPR after the event. “I think they still have preconceived notions of how women will present themselves and I don’t fit in that box.”

At a time when the word “resistance” has been sanitized and neutered, a “vulgar” Wolf understood the power of words and used them to deliver a knockout punch to a crowd more accustomed to being comfortable.

It is instructive that in the era of Trump — a man who has torpedoed the notion of civility — women are still expected to be polite and demure. “She did not cater to the room” was an actual criticism of her performance.

At a time when the word “resistance” has been sanitized and neutered, a “vulgar” Wolf understood the power of words and used them to deliver a knockout punch to a crowd more accustomed to being comfortable. As one commentator put it: “She wanted to napalm the room and she did. Unapologetically.”

That is the power of profanity — and why it is important for women to not shy away from it. Indeed, whenever I stand at a podium to give a lecture, I begin with my declaration of faith: “F**k the patriarchy.” Whether I am lecturing on feminism in Lahore, Pakistan or Dublin, Ireland or Johannesburg, South Africa or New York City, my declaration never changes.

I could say “dismantle the patriarchy” but I don’t because I am a woman; a woman of color; a Muslim woman. And I am not supposed to say f**k.

In my experience, almost nothing can match the power of profanity delivered by a woman at a podium, unapologetically.

In my experience, almost nothing can match the power of profanity delivered by a woman at a podium, unapologetically. Because how many women — not to mention women of color — are ever even invited to the podium? And of those, how many, when they get on stage, still begin almost as if they are asking for permission to speak?

I say f**k to honor the power of “radical rudeness,” as perfected by Ugandan scholar and feminist Stella Nyanzi. Nyanzi was arrested in 2017 and jailed for five weeks on charges of offensive communication and disturbing the peace of President Yoweri Museveni by calling him a “pair of buttocks,” among other things.

But how does one woman threaten a man who has ruled for over three decades? After she was released on bail, Ugandan prosecutors demanded that Nyanzi be subjected to a psychiatric evaluation under the terms of a rarely used colonial-era law — because of course only a crazy woman would dare insult the president in this way.

Nyanzi launched her “rocket-propelled grenade of words” against Museveni because he had reneged on an election promise of providing free sanitary products to Ugandan schoolgirls. Girls around the world miss school days because of period poverty. Nyanzi — who also launched a campaign to collect donations for sanitary pads — wanted action.

Patriarchy punishes women for profanity because it wants us to forever remain within the straitjacket of niceness and politeness, despite the violence it subjects us to.

“What other avenues do we have left to us?” Nyanzi asked in an interview with Canada’s Globe and Mail. “We don’t have guns or money. But I can still write and think and insult and abuse.”

I say f**k because profanity is an important tool in defying, disobeying and disrupting patriarchy and its rules. Patriarchy punishes women for profanity because it wants us to forever remain within the straitjacket of niceness and politeness, despite the violence it subjects us to.

We are not fighting on an equal battlefield. The shock and the offense profanity causes are necessary and important. Surely, misogyny and the violence it visits upon our bodies are more offensive than words?

Girls missing school because they cannot afford sanitary is more offensive. Poverty is more violent than insults lobbed at any nation’s president. F**k being polite. F**k being nice.

My first language is Arabic, a gendered language in which the most powerful profanity refers to a mother’s genitals. Because of course the worst words are the ones that somehow insult or refer to women.

The shock and the offense profanity causes are necessary and important. Surely, misogyny and the violence it visits upon our bodies are more offensive than words?

I think it’s time we found more non-gendered swear words. And so in my determination to reject profanity that diminishes and insults femininity, I have started using the epithet: “F**k off, kitten.” Kittens are cute, the word itself is gender neutral yet the (mostly men) I use it against on social media know my intent.

I say f**k to challenge patriarchy’s stranglehold over what is and is not offensive. Remember that in 2012, Lisa Brown a Democrat state representative in Michigan, was banned from addressing her colleagues after it was ruled she had “violated the decorum of the house” when she used the word “vagina” during a debate over a controversial anti-abortion bill.

“What she said was offensive,” complained state representative Mike Callton, a Republican. “It was so offensive I don’t even want to say it in front of women. I would not say that in mixed company.”

Using the hashtag #WhyISayF**k, I asked women what profanity meant to them. One woman told me that “Being a professional from a working class background I struggle with saying ‘f**k.’” It was a reminder of how the intersection of class, gender, and race and other forms of oppression are all used to police women’s language. The less power a woman has, the less freedom she has to curse. The more a woman is caught in the intersections of oppressions, the more her language is policed.

What would the world look like if the energy spent policing language, especially female language, was invested instead into policing the very real harm of patriarchal violence?

Once while standing in line at Denver airport security, a white man — another passenger waiting to go through — demanded I “prove” I was a U.S. citizen. “F**k you!” was my immediate response. Another white man immediately and predictably chimed in: “Language! Language!” But what is really more offensive here, the first man’s xenophobic prejudice or my language?

What would the world look like if the energy spent policing language, especially female language, was invested instead into policing the very real harm of patriarchal violence?

Actress Helen Mirren, who is child free, has said that if she had had a daughter the first words she would have taught her would have been “f**k off,” because girls are raised with the expectation of politeness and sometimes politeness is the wrong response. Let’s teach all our girls to say “f**k,” loudly, proudly, unfiltered and uncensored. Let’s teach our girls to be like Michelle Wolf. As one of Wolf’s friends told her before her Correspondent’s Dinner speech: “Be true to yourself. Never apologize. Burn it to the ground.”

Mona Eltahawy is a feminist writer and public speaker based in New York City and Cairo. She is the author of “Headscarves and Hymens: Why the Middle East Needs a Sexual Revolution

#India- The Struggle Against Rape and Sexual Assault: A View from the Left #Vaw #Rape
Taj Mahal: What we stand to lose
Gandhi Falls in Ghana as University Topples Statue Donated by India
Dr Kafeel Khan arrested at Mumbai airport for instigating students in Aligarh last month