Monsanto has a long history of threatening the health of animals, humans and the planet–which is why it’s the target of protest, reports Kim Sloan. 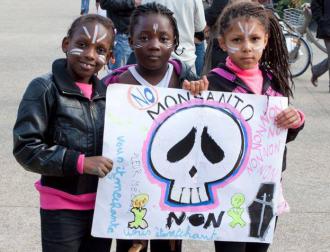 Marching against Monsanto in Paris

THE MILLIONS Against Monsantocampaign held a global day of action on October 12 to protest the use of genetically modified organisms (GMOs) and other harmful agro-chemicals that pose a threat to the global food supply. Events took place in more than 400 cities and 57 countries around the world. In the U.S., there were protests in 47 of the 50 states, and in Northern California alone, there were more than 13 actions, including protests in Vallejo, Sacramento and San Francisco.

For years, activists and experts have criticized Monsanto, one of the world’s largest agribusiness corporations, for a host of reasons, including its seed patent policies that put small farmers out of business, its ownership of 90 percent of the world’s seed and poisonous pesticides, and the revolving door that turns Monsanto executives into government officials responsible for agribusiness regulation (and vice versa).

In San Francisco, participants in the day of action there gathered at noon to march across the Golden Gate Bridge in bee costumes, corn monster attire and biohazard suits, carrying cans of pesticide and accompanied by a marching band.

“Seed Giants vs. U.S. Farmers,” a recent report by the Center for Food Safety, summarizes the many problems with current seed patenting policy, which has produced a lack of seed diversity and skyrocketing seed prices, while reducing independent scientific research on human health as well as the environment. Monsanto has patent rights on more than 96 percent of the genetically modified seeds planted in the U.S.

In the 2012 election cycle, Monsanto and other biotech companies raised more than $91 million to spend on federal candidates from both parties in order to make sure that a tide of corporate-friendly legislation continues flowing out of Congress. Last month, the Senate and House passed a bill known by critics as the Monsanto Protection Act.

By attaching a rider to a fiscal bill, legislators ensured that farmers can continue planting genetically modified crops even before the U.S. Department of Agriculture is able to perform a sufficient environmental impact assessment. The GMO rider, originally introduced in March 2013, was set to expire on September 30, but in the absence of a new bill, the existing law was extended, thus keeping the provision in place for at least three more months.

The rider essentially violates the separation of executive and judicial powers by giving powerful corporations the leverage they need to get courts to dismiss cases challenging GMO crops. Small organic and anti-GMO farmers no longer have judicial recourse when genetically engineered crops become cross-contaminated with their produce.

MONSANTO HAS a long history of toxic “innovations,” including the weed killer Roundup, recombinant bovine growth hormone (or rBGH, which is commercially known as Posilac) used to increase milk production by cows, and the patenting of genetically modified organisms.

But that’s not all.

Why is PIL against Isha Foundation’s illegal construction in TN not being heard ?
I was raped at 55, this is how I responded #Vaw #Womenrights
“Dilution is the Solution” – A de-facto understanding of MoEF & CC.
In search of a revolutionary road #mentalhealth