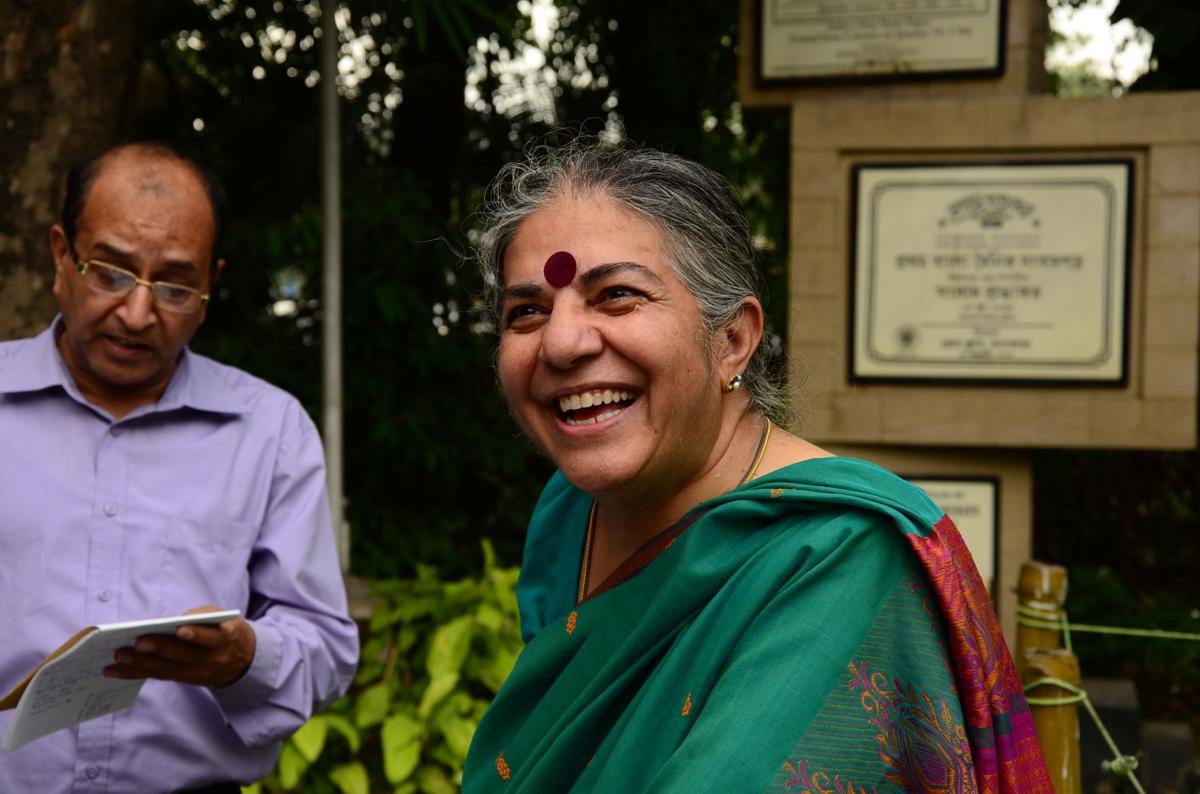 Indian environmental activist Vandana Shiva, a prominent critic of Monsanto, spoke earlier in 2017 at a press conference in Kolkata, India. (Photo by Avishek Mitra/Special to the Post-Dispatch)

As Monsanto, the Creve Coeur-based seed and pesticide giant, prepares to merge with Germany’s Bayer, observers wonder how the marriage will affect the company’s reputation in India, one of the largest markets in the world.

Monsanto has a complicated relationship with the nation of 1.3 billion people. Critics claim Monsanto’s business practices have led farmers into dependence, debt and suicide, a charge the company refutes. Supporters credit the company with advancing India’s Green Revolution of increased crop yields and say its technology is essential for a rapidly growing population.

Monsanto representatives declined to comment for this story on the pending $66 billion merger and public criticism of the company, which is famous for herbicides such as Roundup and insecticides such as Bollgard II.

The company has multiple outreach efforts geared toward helping farmers in India. According to a 2016 Monsanto sustainability report, its Sustainable Harvest Agriculture Resource Environment program, or SHARE, has educated and increased productivity among nearly 71,000 small farmers. Other Monsanto initiatives deal with sanitation, clean water and encouraging education for farmers’ children. And the company works to reduce child labor through a committee that keeps watch on business partners to ensure no child under 14 works in the fields and awards school funding to any “model village” that has 50 farms and no child laborers.

Still, the debate continues in both India and in the U.S.

Richard Oswald, president of the Missouri Farmers Union, said Monsanto’s monopoly has grown by consuming nearly 600 smaller agriculture businesses over the past 50 years, giving the company colossal control over the prices charged to farmers. He fears the merger with Bayer will simply increase the company’s pricing power, and said, “Farmers don’t really seem to take that to heart.”

At the same time, he said, the public is increasingly aware of concerns surrounding glyphosate, the main ingredient in Roundup. According to the National Pesticide Information Center, a cooperative agreement between Oregon State University and the U.S. Environmental Protection Agency, studies have shown conflicting results on whether products containing glyphosate are associated with cancer. Some have associated use of glyphosate with non-Hodgkin’s lymphoma. Monsanto has argued glyphosate is not a carcinogen.

“The public is looking at increased bad publicity about glyphosate being found in our food and even in the tissue of our bodies,” Oswald said.

Many of the same concerns trouble people across the globe, including in India, home to Monsanto’s sole daughter company outside of the U.S.

The Monsanto Tribunal is an international civil society initiative whose purpose is to hold Monsanto accountable for human rights violations. A board of judges listened to victims’ testimonies about issues such as the “right to adequate food,” glyphosate and genetically modified seeds, and delivered an advisory opinion on Monsanto’s actions in April in The Hague in the Netherlands. The tribunal delivered a “guilty verdict,” stating the company infringed on “fundamental human rights.”

Vandana Shiva, an Indian environmental activist, has fiercely opposed Monsanto since 1987 and is known internationally for boldly voicing her contempt for the company’s actions. She has called Monsanto a “criminal” entity and took the company to court in 1999 on charges of illegal smuggling of BT cotton, a genetically modified, insect-resistant variety, into India.

“The Monsanto Tribunal is showing that … it’s a criminal in its behavior of not obeying this law,” Shiva said in an interview after a press conference in Kolkata, India.

Shiva and her supporters say the benefits for farmers have been largely exaggerated and that Indian farmers would earn “four to 10 times more” by not spending money on Monsanto’s seed.

Some researchers and Monsanto critics link debt with rising farmer suicides. But on a company website, Monsanto says the issue is much more complicated, that “farming in rural India brings with it a set of systemic and social issues that can lead to hopelessness among farmers ….” The company says “significant research” has disproved the claim that genetically-modified crops are the leading cause of farmer suicide.

The government of Prime Minister Narendra Modi — and the country’s Agriculture Ministry — called for an antitrust regulation against what they consider Monsanto’s monopolistic practices.

Shiva said she believes the company’s decision to merge with Bayer is an attempt to repair its reputation and fool the public into thinking the company is being bought and controlled by Bayer when it is actually maintaining the same practices. She said she fears the merger will lead to a company powerful enough to manipulate India’s government.

Bayer has its own problems. Its annual reports show it’s no stranger to controversy or legal suits, with an extensive list of lawsuits.

But there are those who believe most farmers in India would be worse off without Monsanto’s help and that regardless of the company’s faults and reputation, India will need its technology.

Key to the future

Bhagirath Choudhary, founder director of the South Asia Biotechnology Centre in New Delhi, said Monsanto has helped India, giving it BT cotton technology in 2002, allowing farmers to triple their yields from 2002 to 2015. Today, India produces 39 million bales of cotton. The merger can’t be stopped, Choudhary said, so India should look for ways to benefit from its inevitability.

“I am advocating for all those companies who have the technology that can help the Indian farmers, and Monsanto is one such,” Choudhary said.

The company’s investment portfolio shows that Monsanto Growth Ventures, the company’s venture capital arm, has been a heavy investor in biotech startups. It has helped fund some budding firms in digital agriculture “aiming to be the next Google or Skype of farm data management systems,” said Jason Miner, senior global chemicals analyst for Bloomberg Intelligence.

As controversy swirls, other seed and chemical companies are also planning to merge — driven in part by the hope of serving growing populations in countries like India and China with genetically modified seeds and crops.

Miner said there are concerns that these mergers will decrease competition, leading to less incentive for cutting-edge research and development in biotechnology.

To ensure against too much market dominance, antitrust regulators are meticulously inspecting these companies, setting the Monsanto-Bayer merger completion date back to late 2017.

Meanwhile, some Indian activists, businessmen and women, and others are looking for ways for India to sustain its people without a major agrochemical conglomerate.

Shiva, for example, started the Bija Vidyapeeth, or “Earth University,” through her nonprofit organization, Navdanya, which helps teach farmers alternative systems of agro ecology in order to get out of debt and produce healthier foods.

But financial analysts say India is a growing economy where companies such as Monsanto should invest, not divest. “It’s a vibrant market for agricultural inputs for farming,” Miner said, adding that the future holds even “more growth opportunity.”

The KOODANKULAM EXPOSÉ- and the Right to Know
' We are Illegal '- A visit to the Solidarity Clinic in Greece
SIT officer breaks silence: Ishrat killing was premeditated murder
India- Sabarmati once the cleanest river , is contaminating lives now ! #WTFnews