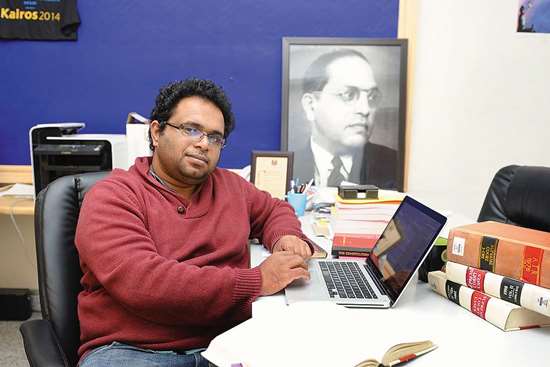 INTERVIEW
‘Most Death Row Convicts Are Poor’
It has taken 16 months, 400 interviews and over Rs 30 lakh for the ‘Death Penalty Research Project’ to see the light of day.
UTTAM SENGUPTA INTERVIEWS ANUP SURENDRANATH

It has taken 16 months, 400 interviews and over Rs 30 lakh for the ‘Death Penalty Research Project’ to see the light of day. Project head Anup Surendranath, an assistant professor at National Law University, Delhi, speaks to Uttam Sengupta. Excerpts:

What triggered this project in the first place?

There has been no real empirical study on the administration of the death penalty in India. Research on the death penalty has been limited to analysing Supreme Court judgments but we felt there was a need for a much deeper understanding of the manner in which India sentences people to death. We found there was no consolidated figure on the number of persons India has legally executed since Independence, no socio-economic profile of death row prisoners and no details at all about their family members or their experience with the criminal justice system. We found most of the information currently available to be inaccurate and we had to collect information from all prisons across the country that lodge death row prisoners – it literally required last mile verification. The collaboration with the National Legal Services Authority in June 2013, which was then headed by Justice P. Sathasivam, gave us a degree of legitimacy and of course access.

So 16 months after the project started, where have you reached?

We have conducted interviews with nearly 400 prisoners on the death row. Most of the states have cooperated although we were not allowed to record the interviews, which had to be conducted in the presence of prison staff, which wasn’t always very helpful. Maharashtra Government fobbed us off for eight months before relenting though it did not allow us access to around four convicts who were accused in terror cases. The Tamil Nadu Government has still not given us access because they want the security agencies in Delhi to give their clearance. But the most difficult part of this Project was tracking down the families of death row prisoners. Our young student researchers did an incredible job of a task that was physically demanding, emotionally stressful and often hostile. There have been many hurdles along the way but we have managed to keep the momentum going.

What are the major findings of the study?

I would not like to divulge all the details till we actually publish the report. But clearly an overwhelming majority of the convicts on death row are from backward castes, dalits and minorities. Most of them are actually first-time offenders and not habitual offenders as is widely believed. Most of them were convicted on the basis of recoveries arising out of confessions in a police station (such confessions are inadmissible as evidence in a court of law). Over 80 per cent of them, I would say, were tortured. And of course virtually all of them are poor. We knew it intuitively but for the first time in this country we are crunching numbers and actual case studies to show the reality on the ground. We also have interesting findings on the categories of crimes for which individuals are sentenced to death, the quality of evidence used, the nature of legal assistance, treatment in prisons etc.

Are you suggesting a majority of them are innocent?

Innocence was never an important point of enquiry for us. Our research into the administration of the death penalty was independent of considerations of innocence. We were primarily interested in looking at whether there are sufficient safeguards in the criminal justice system to sentence people to death in a society like ours. And equally importantly, the extent to which the safeguards provided in the law were followed while sentencing people to the harshest punishment in our penal framework.

Of course, we did come across cases where gross miscarriage of justice seems to have occured. But the trouble is that when you intervene after the Supreme Court has already confirmed the death sentence or after the President has already rejected the mercy petition, there is little scope to go back to the trial stage and look at the evidence all over again. So unless there is intervention at the lowest stage, the options become really restricted.

Did a majority of them claim they were innocent?
Irrespective of whether they claimed innocence or not, the one aspect that stood out was that talking to us was, for most of them, their first chance to explain their side of their story. Nobody had really bothered to understand their version of the story. The extent and quality of their interaction with their own lawyers, whether private or legal aid, was abysmal with a few notable exceptions. Unlike what you see in the movies, there are no lengthy discussions between the prisoner and the lawyers, there is no elaborate strategy – all that there is, is a criminal justice system with its own internal logic with the prisoner as the most insginficant actor.

What do you mean when you say systemic changes are required?

India’s systemic reality is that the criminal justice system works differently for different people. The police behaves very differently in its dealings with a lower caste person as opposed to the village Pradhan or a richer person. And it is not just our police, our entire crimianl justice system faces a tremendous crisis and factors like class, caste and religion operate to further victimise already marginalised sections. And these are not going to be changed by ‘reforms’ because it requires fundamental social and economic changes in our society. It is not as if you can turn a knob or use the right combination of keys and change these realities. For example, in Bihar in one case upper caste men were arrested for the massacre of dalits  and in another case dalits were arrested for the massacre of upper castes. Both cases were dealt with very differently. Dalits were tried and sentenced to death under TADA but not the upper castes, who were tried for offences under the Indian Penal Code.. For similar offences with similar kind of evidence, the dalits arrested in connection with the Bara massacre continue to be on death row after cofnirmation by even the Supreme Court but those arrested for the Laxmanpur-Bathe massacre have been acquitted by the Patna High Court.