Mr Karan Johar Indian film industry is not your inheritance 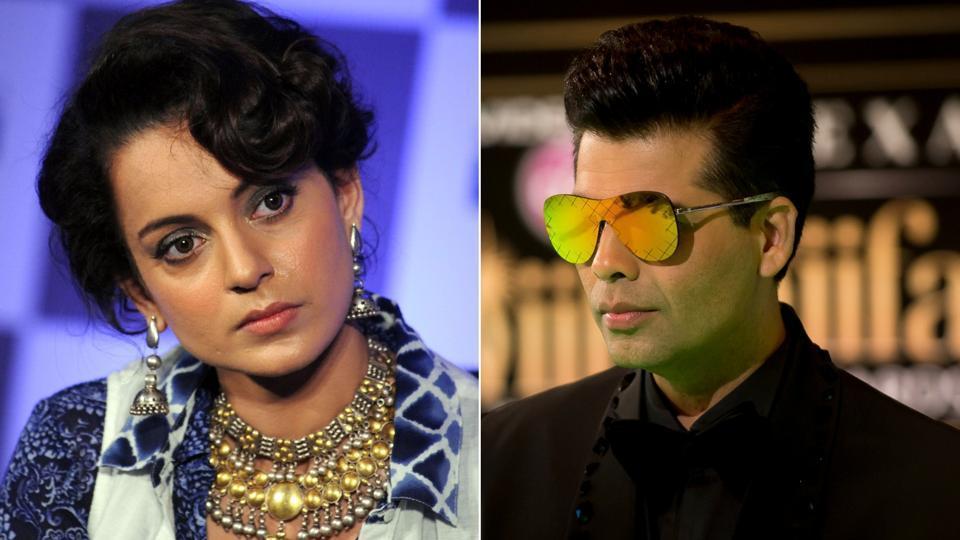 KANGANA RANAUT: MR KARAN JOHAR, I WAS PLAYING THE BADASS CARD, NOT THE VICTIM CARD Kangana Ranaut is spoiling for a fight and responds to Karan Johar’s accusations in kind.

In the battle of barbs, Kangana Ranaut has fired the latest salvo. The actress who is at a retreat down south, is not letting Zen get in the way of what has turned into Bollywood’s Battle of the Sexes.

Earlier this week, Karan Johar, arguably one of the most powerful men in the Hindi film industry, while speaking on the sidelines of an event at the London School of Economics, hinted that Kangana may not have understood the meaning of the word nepotism, that he was fed up of seeing her play the ‘woman card’ and ‘victim card’ and that if the actress had such a problem with the way Bollywood functions, she should think about quitting it. Johar’s sharp attack was in response to Kangana’s comment on his TV show of February 19 where she called him the “snooty flag-bearer of nepotism” and hinted that he was running a “movie mafia”. Speaking to Mumbai Mirror, a combative Kangana tells it like it is.

I can’t speak for Karan Johar’s understanding of nepotism. If he thinks that it is restricted to nephews, daughters and cousins, I have nothing to say. But, to say that he chose not to give me work is to mock an artiste. As importantly, his memory appears to be poor because we worked together in a movie (Ungli), which was produced by him. And quickly realised our sensibilities did not match.

I’m also at a loss to understand how he gave me a platform by inviting me to be on his show. (Johar had said that he gave Ranaut a platform to “give it off to Karan”.) I’ve been on several platforms before with several global icons. To say he helped me voice my opinions is to discredit me as an artiste and a public personality. And, I think, it should be added here that I was invited to be a part of the show in its fifth season. (Johar’s talk show made its debut in 2004). His team requested my team for months for my dates.

But what is pertinent here is: why is Karan Johar trying to shame a woman for being a woman? What is this about the ‘woman card’ and the ‘victim card’? This kind of talk is demeaning to all women, particularly the vulnerable because they are the ones who really need to use them. The ‘woman card’ might not help you become a Wimbledon champ, or win you Olympic medals, or bag National awards. It might not even land you a job, but it can get a pregnant woman who feels her water is about to break a ‘ladies’ seat on a crowded bus. It can be used as a cry for help when you sense a threat. The same goes for the ‘victim card’, which women like my sister, Rangoli, who is a victim of an acid attack, can use while fighting for justice in court.

I use every card possible. At the workplace, it’s the badass card to fight cutthroat competition. With my family and loved ones, it’s the love card. When fighting the world, it’s the dignity card, and for a seat in a bus, it’s the woman card. What is important to understand is that we are not fighting people, we are fighting a mentality. I am not fighting Karan Johar, I am fighting male chauvinism.

Now that Karan is the father of a little daughter (Johar became a single parent of twins, who were born through surrogacy last month), he should provide her with all these cards — the ‘woman card’ and the ‘victim card’, as also the ‘self-made-independent-woman card’, and the ‘badass card’ that I flashed on his show. We will use whatever we need to ensure no one rocks our boat.

I’m also a little surprised at the “graciousness” he says he displayed in choosing to not edit the jousty bits on the show. While I’d have blacklisted the channel if something like that had happened, let’s also remember that a channel wants TRPs, and he is just a paid host.

Also, the Indian film industry is not a small studio given to Karan by his father when he was in his early 20s. That is just a small molecule. The industry belongs to every Indian and is highly recommended for outsiders like me whose parents were too poor to give me a formal training. I learnt on the job and got paid for it, using the money to educate myself in New York. He is nobody to tell me to leave it. I’m definitely not going anywhere, Mr Johar.”

— As told to Roshmila Bhattacharya