A DAY after Dr Neeraj Hatekar’s suspension was revoked, following a 10-hour-long meeting between members from the Management Council and Mumbai university Vice-Chancellor Dr Rajan Welukar, a group of 12 students sat on a hunger strike outside the Kalina campus. 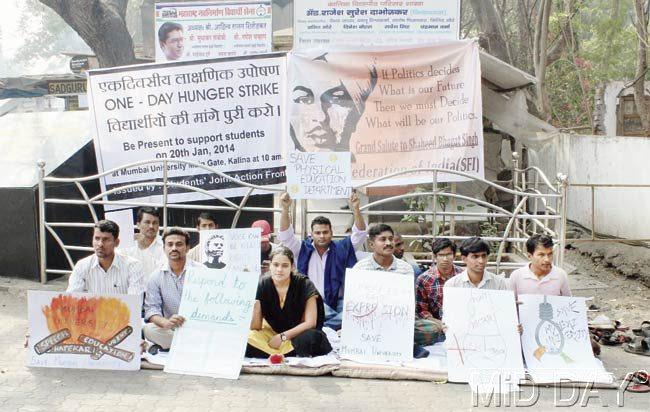 The protesting students said the purpose behind their agitation was redressal of problems faced by students related to infrastructure and academics. The 24-hour-long strike will conclude by 10 am today. The students, whose group is named SAVE MU, were supported by another group of 25 students and Hatekar, who sat with the students for two hours in the morning before leaving for his lectures. 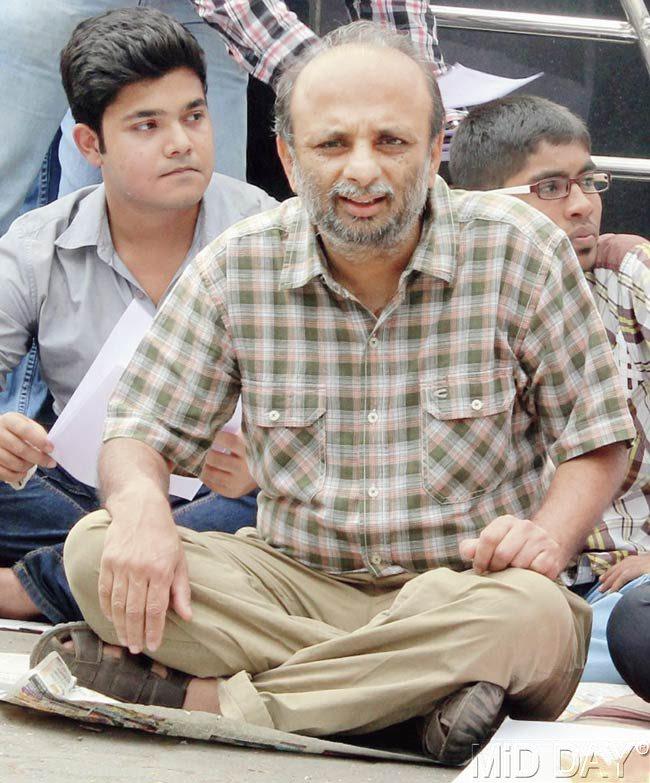 Dr Neeraj Hatekar joined the protestors for two hours, following which he left for his lectures. Pic/Amit Jadhav

Narayan Khuse, an MA student and a protester, said, “Our demands have been forwarded to the Chancellor. Gym facilities, for which Rs 200 is taken as annual fee from students, must commence immediately. The equipment is already purchased and students must be able to avail of the benefits — this is one of our several demands.”

Echoing Khuse’s sentiments, Mahendra Adhav, a PhD student, said, “If our demands are not fulfilled at the earliest, then we’ll go on an indefinite hunger strike outside the campus.” According to university officials, the protesting students have already met the Pro-Vice-Chancellor Dr Naresh Chandra and Registrar Dr M A Khan on January 11, and the charter of demands is already with the university. They added that the higher authorities have planned to meet the students today to discuss the pending demands.

The  Members of the Students’ Joint Action Front of the University of Mumbai along with students from various departments, who completed a 24-hour hunger strike on Tuesday morning, refused the university’s offer to discuss their demands with the pro-vice- chancellor.

They have asserted that they would settle for nothing less than an audience with the vice-chancellor himself.

The students have been campaigning for a set of demands that included revoking econometrics professor Neeraj Hatekar’s suspension. In a press note, the university stated that a committee of three students met university officials with their demands and reiterated that the authorities needed to improve the facilities and teaching material. The group met pro vice chancellor Naresh Chandra, registrar M A Khan, two hostel secretaries and wardens on Tuesday afternoon.

“Some issues are already in the process of being addressed. In some other cases, there is some misunderstanding and in some other matters, the university needs some time to address them,” mentioned a press note issued by the university. However, the protesting students refuted the varsity’s version. “Some students, who were present at the location of the hunger strike, for some time, were taken to pro-vice-chancelloron 21 Jan by 4pm. They were neither the members nor the representatives of the Joint Action Front. They came to the location of the strike to empathize the protesters. As a result, they may not be as competent as representatives of the Front to discuss the charter of demands. The act of inviting any students who were presented at the location (for discussion) is strongly condemned,” said a student. On Monday, “At around 9 pm on Tuesday, the security handed over a letter issued by Mridul Nile, Director of Students Welfare, but we refrained from accepting it. The letter stated, a closure of the strike and requested students to form a committee of three members to address a meeting with the university officials at 4pm on Wednesday,” said one of the students on protest.

Students however did not accept the letter, as they wanted the Vice Chancellor to come and address them. Around 9.30 pm, the pro vice chancellor, registrar and Niley came to speak to students who were on hunger strike.

Issues raised by students include providing sports and computer facilities to all students, making the reading room available to all for 24 hours, having adequate security at the ladies hostels, installing street lights in parts of the campus where they are lacking and providing basic facilities to each department like drinking water, benches, lecture hall, waste bins, common room and hygienic toilets. Students were informed that the small amount that is being collected for the virtual classrooms was collected so it could be financially sustainable.