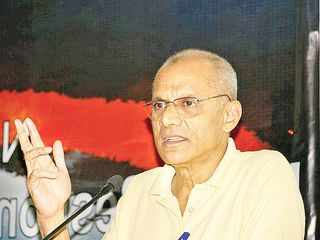 Mumbai-born IIT graduate-turned Senior Advocate (designated) of Supreme Court Colin Gonsalves has been selected for the prestigious Right Livelihood Award 2017 – often described as the Alternative Nobel Prize. Gonsalves said he is “humbled and privileged” at the honour.

The announcement made in Sweden on Tuesday makes Colin the first Indian rights lawyer and also first from the country in the past eight years to be named for the award which he shares with three others.

The Stockholm-based award foundation said Gonsalves has been endowed with the honour “for his tireless and innovative use of public interest litigation over three decades to secure fundamental human rights for India’s most marginalized and vulnerable citizens.”

“I am both humbled and privileged by the award. It comes at a time when India is going through a dark period and human rights activists are under siege,” Gonsalves said in his reaction to the announcement.

Over the years, starting as a young lawyer in Mumbai, Gonsalves specialized in labour cases, fighting for various organized and unorganized sectors including mediapersons, other poor and backward sections of society besides environment and crime.

He said the platform the (award) Foundation provides would help them strengthen democratic resistance at this critical stage.

Gonsalves, 65, was born in posh Colaba, south Mumbai, and studied at the Campion School and later St. Xaviers College before moving to IIT-Bombay from where he graduated in B.Tech. in 1975.

Working as a civil engineer for some years, he later joined a night law school and became a lawyer in 1983 when he co-founded the Indian Centre for Human Rights & Law in Mumbai, which later grew into a network of over 200 lawyers under the Human Rights Law Network (HRLN) founded by him.

After many a successful legal battles in Mumbai and Maharashtra, Gonsalves moved to New Delhi and lives there with his wife and daughter.

It was bagged by the late Asghar Ali Engineer and Swami Agnivesh (2005), Ruth Manorama (2006), Krishnammal Jagannathan and Sankaralingam Jagannathan/LAFTI (2009). After a gap of eight years, Colin Gonsalves (2017).

The award – carrying a prize of USD 374,000 – shall be conferred on the recipients at a ceremony in Sweden late-November or early-December, he said.