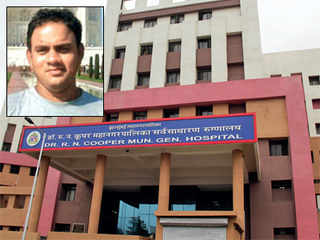 DOC, SUSPENDED FOR FILMING COLLEAGUE BATHING, REINSTATED EVEN AS AN INQUIRY IS STILL ON

By Lata Mishra, Mumbai Mirror | U

The abrupt reinstatement of a Cooper doctor, who was suspended in June last year was after being caught filming two colleagues while they were bathing, has created a stir in the campus.

Ared-faced Cooper administration has now admitted that the reinstatement of Dr Yogendra Jaiswar , 29, against whom an internal inquiry is underway, was wrong and that it was based on misinterpretation of a court order.

Police are also independently inquiring into the charges made against of Dr Jaiswar and he is currently out on bail.

Dr Jaiswar, an orthopedician, was suspended after a preliminary probe found him guilty.

He, however, moved the Andheri magistrate’s court subsequently arguing that the suspension had disrupted his preparation for a post-graduate degree. The court, taking a sympathetic view, only allowed him access to the campus. But an over-enthusiastic Cooper administration reinstated him and placed him at the BMC-run Trauma Care Centre, just ten minutes’ drive from the Cooper campus in Juhu.

Cooper administration not only completely overlooked the fact that two inquiries were yet to clear Dr Jaiswar, his reinstatement was also in violation of the Sexual Harassment of Women at Workplace (Prevention, Prohibition and Redressal) Act, 2013. Additional Municipal Commissioner IA Kundan has now instituted an inquiry into Dr Jaiswar’s reinstated.

It took the complainant five months of running around to bring it to the notice of authorities that Dr Jaiswar’s reinstatement was wrong at multiple levels.

“Forget about listening to me, it took me four months to just get a copy of the court order that was used to reinstate him,” the victim told Mumbai Mirror on Saturday.

In a letter written to Kundan, the victim wrote: “I am mentally depressed and it [the reinstatement of the accused] had caused huge embarrassment to me. I did not even want to step out of my house. Adequate precaution was not taken regarding maintaining confidentiality by senior hospital authorities and my name was publicly discussed.”

Deputy Municipal Commissioner Sunil Dhamane, who has been asked to conduct a fresh inquiry, said he has already met with a few Cooper officials. “I am meeting some more officials connected to the case next week. The BMC’s legal department is assisting me in this inquiry,” he said.

Jaiswar was caught after one of the women, who saw the video clips that had been circulated, suspected his involvement as he had been pestering her with messages from the time she joined the course at HBT Medical College, on the Cooper Hospital premises.

After she approached the hospital dean and subsequently the Juhu Police, Jaiswar’s phone and laptop were checked, and three video clips were found stored in the phone.

Sources at the Juhu police station had said then that Jaiswar purportedly told the police he had been clandestinely recording women “for fun”.