Mumbai – Gay blood donors to be asked about sex life 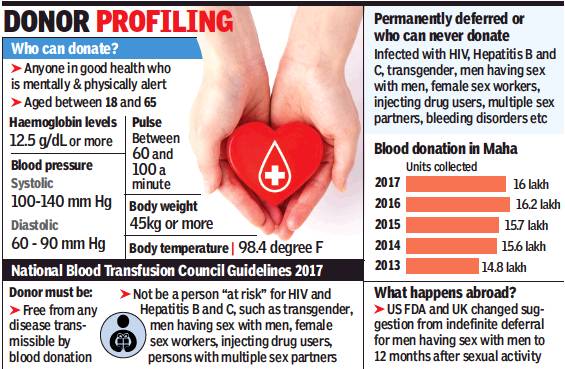 A new and more exhaustive blood donor screening questionnaire will now require male donors to answer questions about their sexual behaviour and whether they have multiple partners. While a ban on gay men donating blood has existed in India for decades, this is the first time that the form spells out these questions in black and white.

Blood banks in the city recently received the updated format from the state arm of the National Blood Transfusion Council that, in October 2017, had revised its guidelines pertaining to selection of blood donors. The guidelines reiterate that gay and bisexual men, transgenders and female sex workers can never donate blood as they have a higher risk of contracting HIV and Hepatitis B and C. The ban also applies to individuals suffering from chronic illnesses such as cancer, organ failure, allergies and respiratory ailments.

Staffers at the blood banks said the new questionnaire, designed on the lines of developed nations, has put them in a spot. The earlier format cursorily asked whether the donor had a reason to believe he or she may be infected by hepatitis, malaria, HIV or Aids, or any venereal disease. The new one mandates blood collectors to ask if the donor has “multiple sex partners or engaged in male to male sexual activity”.

Detailed donor profiling will not be a cakewalk though, say stakeholders. “It is going to be tricky for us, but it’s also essential to keep such patient-history forms as truthful and scientific as possible. Such questions are asked in most developed countries,” a blood transfusion officer told TOI. An estimated 200 people in Maharashtra get HIV every year through the transmission route, though that number has steadily declined. Another staffer of a public blood bank said with the new Supreme Court order decriminalizing homosexuality, it is possible that more men could reveal their relationship status.

“Effectively, we have just reviewed the document and changed the wordings keeping in line with the Drugs and Cosmetics Act. The Act is clear that donors cannot be at a high risk of contracting infections and donate blood too,” she said, adding that the Supreme Court verdict had no role to play here. “That’s a change in law. We have to see if it brings about any behavioural change,” she said.

Ashok Row Kavi of Humsafar Trust, though, said there are issues of confidentiality that need to be addressed better. “Are gay men simply supposed to give away such intimate details in a public blood camp? While such questions are necessary for screening, they also have to create an environment where a person feels comfortable to share,” he said, adding that banks much seek the help of gay community counsellors.

Kavi further said that world over the debate has long shifted from permanently prohibiting gay men from donating blood to 12-month exclusions, where they are prohibited for 12 months after sexual activity. “It’s time we begin such discussions here,” he said