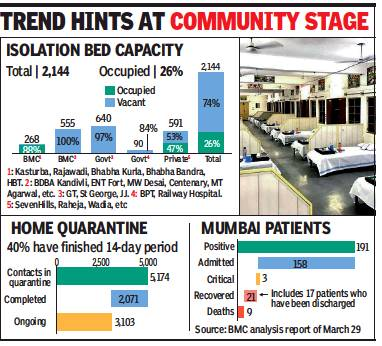 Only one out of every three patients who tested positive for Covid-19 in Mumbai has an international travel history. The majority (41%) of the positive patients in the city are close contacts of these travelers.

An analysis by civic authorities of the 209 positive patients reported in the city until Tuesday showed that 67 had clear travel history: 25 had been to the UAE, 12 to the US and 8 to the UK. Another 86 patients were their contacts.

What is worrying is that BMC couldn’t ascertain the source of transmission in 26% (56 in numbers) of these 209 patients. Experts say this could hint to the extent of the local spread of the virus. A senior state health department official said the rising trend of “non-travel-related cases” was worrisome but he qualified it by saying, “The majority of our cases still relate to travel or high-risk contacts of these travelers. Measures such as the ongoing lockdown will flatten the peak long enough for our healthcare system to be able to bear the burden of patients.”

BMC officials said they are in a state of preparedness, having created 2,144 isolation beds – of which 26 % are occupied. Of the 21 symptomatic cases treated at the civic-run Kasturba Hospital till March-end, 17 have been discharged after treatment.

Dr Amol Manerkar from Ghatkopar said cases seem to be under control at the moment. “We are getting many patients with respiratory problems, but only a few are testing positive for Covid-19,” he said. The analysis also showed that the 209 positive cases considered were found from 6,100 tests done by the BMC and private laboratories till March 31.

Of the 1,203 samples tested till the end of Tuesday, half were conducted by private labs which charge Rs 4,500 per test and visit an individual’s home to collect samples.

Using digitized maps, BMC found that 7,818 of 26,226 passengers who arrived from abroad in March were based in Mumbai. They contacted most of the city passengers, but were unable to reach 484 of them due to incorrect details provided after their arrival at the airport in self-declaration forms.

Civic officials distributed these details to local medical health officials who have advised 14-day home quarantine for 5,174 passengers (including close contacts of symptomatic passengers). In the last three weeks, 2,071 of them have already completed the 14-day period and 3,103 are still under home quarantine as of March 29.