Mumbai Man fails to get ill mom in pvt hosp, waits 3 days for her body 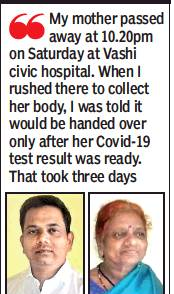 A Dombivli man had a harrowing time trying to get his mother who developed heart issues admitted to a hospital and then for the next three days to get her body after she passed away in a civic hospital.

This past Saturday, Sameer Mohite (38) rushed to his mother, 65-year-old Sangita Mohite, after she fainted in Sanpada at his sister’s place where she had moved before the lockdown. The senior citizen was first rushed to a private hospital in Sanpada which refused her admission on the ground that she could be Covid-19-positive.

She was then rushed in an autorickshaw to the Vashi municipal hospital, where she died the same night. “Had the private hospital admitted her on Saturday evening, she might have survived. I will be writing to Navi Mumbai Municipal Corporation about this,” he said.

“I was in Dombivili when I was informed that my mother had collapsed due to her heart condition at Sanpada. After the local Millennium Hospital refused to admit her, I called several other private hospitals for an ambulance, but there was no response. She passed away at 10.20pm on Saturday at the Vashi civic hospital. When I rushed there to collect her body late at night, I was told it would be handed over only after her Covid-19 test result was ready,” said Mohite.

For the next three days, Mohite travelled from Dombivli to Vashi by bike for the status of her report. “It was only on Tuesday night that I was allowed to take her body after her test result was negative,” said Mohite.

He was often stopped on the road by the police and asked why was he not carrying a death certificate. “I had to patiently explain to the police each time that the certificate would be issued only once the Covid-19 test result was released. It was a horrible experience,” he said.

Last week, 56-year-old Vashi lawyer Jaideep Jaywant too had died of a heart attack after a private hospital refused to admit him.

NMMC commissioner Annasaheb Misal told TOI: “I have already had a meeting with managements of several private hospitals and clearly told them they cannot refuse any patient who urgently requires medical attention, otherwise action can be taken on erring hospital staff. In regard to the unfortunate death of the Vashi-based lawyer, I have already ordered an inquiry.” Former local MP Sanjeev Naik said, “There have been at least eight deaths of non-corona patients in Navi Mumbai, as per my knowledge. This is not a good sign.” He said his personal assistant had to intervene in the Sangita Mohite death to get her papers and carry out her last rites