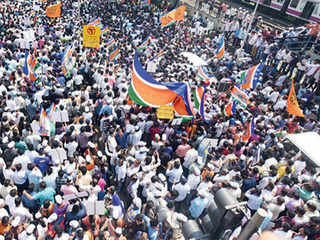 On Thursday, Maharashtra Navnirman Sena chief Raj Thackeray took out one of his massive morchas which blocked traffic and inconvenienced lakhs of train commuters going home from work. Police had denied him permission but such niceties never bother any Thackeray.

Those not inconvenienced were feeling indulgent towards the MNS rabble-rouser for once, because this time, his cause wasn’t the usual anti-‘ outsider’ obsession. The morcha was supposed to be a protest against the Elphinstone Road stampede and its target was supposed to be PM Modi‘s bullet train.

But Raj Thackeray proved that he was incapable of going beyond disruptive identity politics. Though he criticised Modi in his speech, his main demand was that the railways evict hawkers from railway stations and foot over-bridges within 15 days.

Many commuters had voiced the same demand after the Elphinstone Road disaster. But coming from Raj Thackeray, and backed by an ultimatum, Mumbaikars knew what it meant. When the MNS chief burst into the limelight in 2008, it was by getting his “boys” to thrash North Indian hawkers and taxi drivers. Any doubts that his target this time too were ‘outsiders’, were cleared by his ultimatum that if the authorities didn’t follow his diktat, his “boys” would do so.

This was an obvious instigation to violence made at an unauthorised rally. Did the Mumbai police take any action? One report said they filed a case against the MNS for illegal assembly. No mention was made of sections relating to promoting disharmony between groups, or instigating violence.

None of this should surprise us. Whoever is in power, the first family of Maharashtra remains above the law. Where Raj Thackeray is concerned, his ultimatums are a lways taken seriously by the government.

Prithviraj Chavan and Devendra Fadnavis are believed to be more conscious of rules than other CMs of Maharashtra have been. Yet, both these disciplined politicians have also bowed down to Bal Thackeray‘s nephew and clone. Chavan even transferred a police commissioner who had averted a major riot on the eve of Eid in 2012, a man reputed to be his own choice, a day after Raj Thackeray took out a rally demanding the top cop’s ouster. That rally was also taken out without police permission.

It should be emphasised that Raj Thackeray is only the leader of a failed political party. Most of his MLAs have left him. So even the only value he had – of being a useful splitter of the Shiv Sena “Marathi manus” votebank – no longer exists.

Yet, he gets to disrupt life in the country’s financial capital whenever he wants.

In August, another massive rally disrupted life in Mumbai. That was the Maratha Kranti Morcha, a culmination of many morchas taken out by Marathas across the state over the last year, demanding reservation and spewing anti-Dalit rhetoric. Marathas are the politically dominant caste in Maharashtra; in the countryside, they rule like zamindars of yore. At Mumbai’s rally, some of them turned up in fancy cars.

On the eve of the 2014 Assembly elections, the Congress-NCP government announced 16 per cent reservation for Marathas in education and jobs, a decision which was struck down by the High Court.

For decades, the Congress and NCP were seen as Maratha parties. But the BJP government has pursued the case for Maratha reservation in court as enthusiastically as its predecessor. The real surprise, however, was the way the government facilitated the Maratha morcha in Mumbai. It diverted traffic, provided water and portable toilets.

None of this would have been worthy of comment had ordinary protesters in Mumbai not found it near-impossible to get permission to protest outside the tiny cage-like enclosure of Azad Maidan. Even groups of 15 can barely raise placards for 15 minutes outside Churchgate or CST before police arrive to shoo them off. In July 2015, a demonstration at Dadar against Yakub Memon’s impending execution was aborted even before it could begin, and the 20-odd persons gathered there were arrested and charged.

There was a time when morchas would begin at Azad Maidan and end at Churchgate. PILs by Churchgate residents put an end to that expression of democracy. Today, protests at Azad Maidan remain a dialogue between speakers and their followers. They make no dent in the consciousness of the rest of the city. The Adivasi morcha in 2011, the student-Left-Dalit morcha to protest Rohith Vemula’s suicide in 2016; the ‘Not in My Name’ morcha in Dadar recently, have made an impact. But these have been exceptions.

So when a divisive demagogue, or a dominant community wanting even more benefits, gets the red carpet treatment from the government, it makes you angry.