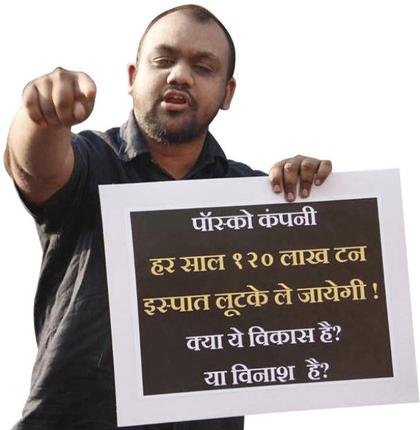 I don’t trust anyone in power, says Mumbai rapper

The BJP ruined breakfast for Ashwini Mishra, 29, last week. This genial Bandraite had just stepped out for his usual morning fare of idlis when a massive poster of the party with its most recognisable face, screamed into his sleepy eyes—’Ab Ki Baar Modi Sarkar’. That’s why, a week later, Mishra was standing in a recording studio in Mahalaxmi, battling a sore throat and bobbing furiously in front of a printout. “Development but lowest wages in the nation. Who develops them, who changes the equation,” he spits, somehow making the year 2002, Narendra Modi‘s alleged closeness to corporates, his alleged aversion to interviews and other criticism, rhyme and chime.

This is A-list, Mishra’s angry rapper alter ego and Mumbai’s most well known hip hop activist, who spits opinions on everything from Section 377 to Kashmir through his music. His famous songs include ‘True Lies: Tale of Afzal Guru‘ (“I like to know someone before I execute them”) and ‘Naxalbari‘ (“Your hero is Steve Jobs, mine is Soni Sori“) based on the life of a school teacher in Chhattisgarh who was arrested for acting as a conduit for Maoists. “I like to talk about things that are not heard of or talked about in the mainstream,” says Mishra, who is going to boycott the 2014 elections because “it is as rigged as the IPL”. But he felt it important to write the anti-BJP song before the Maharashtra polls “to dissuade people from making the wrong choice”.

In a black, corporate logo sporting T-shirt and cropped hair, Mishra looks less a rapper and more a BPO employee. He even performed at a recent concert in formals. But inside him, rap flows like a drug. “It is like chasing a high,” says Mishra, who had pioneered the hip hop scene in Kolkata in 2004. At that point, his music was preoccupied with “emotions rather than issues”. He would draw from disasters such as the tsunami to talk about human suffering in general. Slowly, however, the rapper—who admires the Bob Dylanish quality of rapper Tupac Shakur’s meaningful lyrics and who swears by the literature of Babasaheb Ambedkar and Mahatma Phule—found his lyrics veering towards interventionism.

“I don’t trust anyone in power,” says Mishra, a member of Justice and Peace for All (JAPA)—a network of activists and agitators—whose perspectives helped him fashion gritty rhymes around Irom Sharmila, nuclear plants and the Bhopal gas tragedy from his basement.

“Though I have no agenda except expressing myself, I am glad that my music triggers debates,” says the rapper.His mother, a single mom, is a firebrand, he says. “She understands.” But his recent anti-BJP song has even made her squeamish. “Why don’t you release this song 20 years later?” she bribes him. His breakfast would be too stale then.