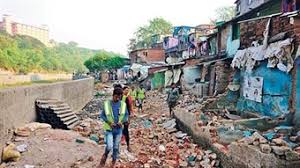 Mumbai | 11th July: Maharashtra government assured Bombay High Court that Mahul is safe and habitable, ignoring the health issues frequently faced by people living in the region. This assurance is in fact actually fraudulent and even contradicts the government’s own previous statements and studies.

The Pollution Control Board’s report on the high level of pollution in area and the NGT’s observations are proof that the place is uninhabitable. The housing minister has stated categorically that the place is uninhabitable. Police personnel and BMC staff have refused accommodation in Mahul because of the grave health hazards. In spite of this the Maharashtra government has been relocating people from various localities to Mahul.

More than hundred people have already died in Mahul in a period of three years. Most of them became ill after being forcibly relocated here and contracted illness from the extreme pollution and became incurably sick and many eventually died. More and more are complaining that they have contracted severe illnesses after moving to Mahul due to unacceptably high levels of various pollutions.

Mahul is amongst the most industrial dense locations. 3 of the nation’s oldest and largest refineries, one of the largest fertilizer producing complex of RCF and Tata’s many thermal power turbine units are all located there. Additionally Mahul has amongst the largest storing facility for process chemicals, many of which are listed as carcinogenic. The housing complex the Gov has set up is in violation of the regulations of the MoEFguidelines and the Courts’ orders. The safe zone distance from the hazardous facility – recommended minimum is 25 kilometers away- has not been adhered to. The MMRDA housing complex is literally at the boundary of the BPCL refinery at a mere 35 meters- a far cry from the mandated distance as prescribed by even the government agencies.

Given the concentration of the facilities and the scale of operations any evacuation plan will be inadequate in case of an emergency leading to leakage of gases or fire. There is a constant threat to health and life of Mahul residents. In 2003 Mahul was identified as a toxic hotspot similar to what Bhopal was after Union Carbide/Dow disaster.

A study conducted by NEERI found that the level of VOC-Benzene was 158 ug/cum during day time and 248 ug/cum during on 05-01-2018 in Mahul against the permissible limit of 5ug/cum by NAAQS, 2009. This means that the level of Benzene is 3,160% to 5,160% higher than the permissible limit. Exposure to this level of Benzene is life threatening. The ground around the complex is seeping with VOC and this gets into the water pipelines leading to serious diseases.

The Bombay High Court’s order to make Tansa pipeline encroachment free led to those residents being evicted. The Court ordered the government to properly rehabilitate the eligible Tansa residents. However, the government, instead of rehabilitating in the true sense, dumped them in Mahul where even the basic amenities are absent. Additionally there is the extreme pollution causing hazard to life and health there too. The absence of basic amenities like schooling, hospitals, employment opportunities have further made life there in Mahul hell for the residents. The residents say that absence of amenities notwithstanding, it is the extreme health hazard that makes them want to move out of Mahul.

The government move to spend Rs.29cr on bettering the amenities there will be a complete waste as the health hazard due extreme pollution continues to plague Mahul. Pollution is the major reason for the residents wanting to vacate Mahul.