Mumbai Riots 1993- Lynchings from another time

Jyoti Punwani travels back 24 years to reveal how individuals were lynched in the aftermath of the communal riots in Mumbai.

‘Mumbai’s killings in January 1993,’ she observes, ‘came at the tail end of two outbursts of vicious communal violence, whereas today, it’s peacetime in a ‘new India’.’

‘At that time, the perpetrators warned onlookers to keep their mouths shut.’
‘Today, the perpetrators take videos of their attacks, such is their confidence.’
‘The mobs have succeeded in terrorising an entire community and indeed, all those dealing in the transport of cattle, whatever their religion.’
Illustration: Dominic Xavier/Rediff.com. 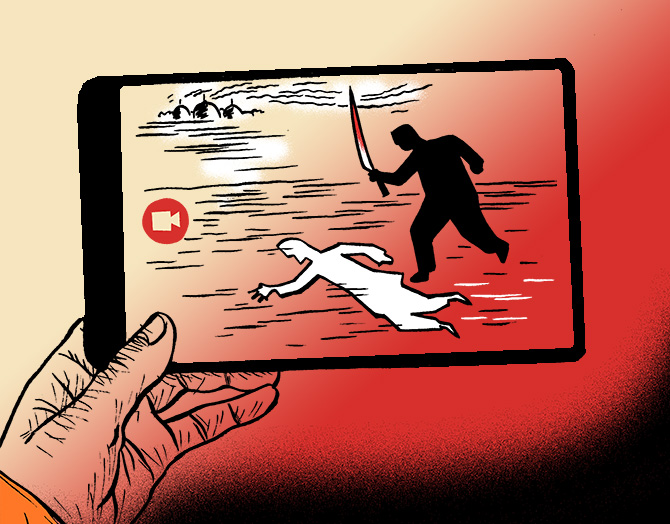 The lynchings of today arouse a sense of deja vu.

January 1993 saw the second phase of the post-Babri Masjid demolition riots in Mumbai.

As the violence was petering out, incidents of lone Muslims who were just going about their work being waylaid and lynched simply because their attire proclaimed that they were Muslim, started occurring.

These killings took place in broad daylight in residential bastis in Mumbai’s suburbs, in full view of terrified residents.

They were long-drawn-out episodes which often ended with the corpse being burnt to shouts of ‘Jai Sri Ram‘.

That marked the ultimate triumph of the assailants: Foisting the last rites of their religion on the ‘enemy’ after eliminating him or her.

For women too were not spared.

At least four women were lynched. One survived to testify against the men who assaulted her and her young daughter.

She knew them, they were her daughter’s neighbours.

The police did nothing then. But weeks later, when relatives of the victims, having waited in vain for their loved ones to return, started making their own inquiries and filed complaints, the police began investigations.

Based on eyewitness statements, mostly given by Hindus who knew the perpetrators and sometimes the victims too, the police arrested many Hindus.

Those arrested were charged under the stringent Terrorist and Disruptive Activities (Prevention) Act, 1985. The TADA applications said their deeds had ‘created terror in the area’. Many of them were Shiv Sainiks.

TADA made bail near impossible, so till the trial finished around 18 months later, the accused remained in jail. That was their only punishment.

All of them were acquitted because the witnesses turned hostile at the trial.

There was one exception. The mother who testified against those who had attacked her and her daughter stuck to her testimony in court.

But the accused, most of them identified as Shiv Sainiks in police documents, were let off partly on a technicality pointed out by their lawyer, and partly because she failed to identify one of the assailants in court.

Though far-from-clandestine, these killings went unreported. Too much violence was on then. These were isolated incidents in the suburbs, not the kind that either attracted attention on their own by their magnitude, nor the kind that the police chose to publicise, for here, Muslims were not the aggressors.

This reporter stumbled upon these lynchings while researching the 1992-93 riots cases.

The hearings of the Srikrishna Commission of Inquiry into the riots had just concluded. It had become clear that even as journalists, we knew very little about both the extent and nature of the violence that had engulfed Mumbai over two months after the Babri Masjid was demolished on December 6, 1992.

Reading eyewitness accounts of these crimes five years after they had been committed, I wondered what had made these victims venture out dressed in clothes that would immediately mark them out as Muslims at a time when the flames of the post-Babri Masjid violence were still smouldering.

Had it not occurred to them that their clothes would make them easy targets?

I remember poet Baqar Mehdi, a proud atheist who hated being identified by his faith, advising me as I was leaving his Carter Road flat (in Bandra, north west Mumbai) after an interview, to wear a bindi for my safety.

In fact, neither of us knew that at that very moment a Muslim was being lynched.

Did that victim, and others like him, feel that the flames in the city would not singe them because they had not raised a hand against anyone?

These ordinary Muslims, most of whom lived in slums among Hindus, had obviously underestimated the reach and influence of the campaign to demolish the Babri Masjid in Ayodhya and build a Ram temple in its place.

When these trusting Muslims were set upon, the campaign was in its sixth year; its hate-filled propaganda had become part of the popular imagination.

Similar propaganda has been spread in the last four years.

In his prime ministerial campaign which took off in late 2013, Narendra Modi railed against ‘vote bank’ politics, a euphemism for ‘appeasement of Muslims’.

He held it responsible for many evils, including cattle being slaughtered rampantly for export — the Pink Revolution. In his speeches he dwelt at length on the pink flesh of the slaughtered animals.

The prime ministerial aspirant blamed ‘vote bank politics’ also for the proliferation of illegal non-Hindu immigrants (in West Bengal and Assam), the lack of safety of ‘our bahu betis‘ (in UP) and for terror (everywhere).

But always, accompanying all this, were the beguiling promises of jobs and development, ‘sabka saath, sabka vikaas‘.

But since 2014, with every state election, the campaign against ‘vote bank politics’ and indeed minorities specifically, has got more virulent.

Remember ‘Ramzaade aur haraamzaade‘ in the campaign for the Delhi assembly in late 2014?

This campaign reached its climax in the run-up to the 2017 Uttar Pradesh elections. The choice of a man known for anti-minority speeches as UP CM has sent an unmistakable signal.

The effectiveness of this campaign can be seen in the number of cow-related lynchings by followers of cow protection Hindutva groups since 2014: 61, according to news reports in the English media compiled by Indiaspend. One more has just taken place in the capital.

Contrast this number with the dozen-odd lynchings in Mumbai in January 1993.

Mumbai’s killings came at the tail end of two outbursts of vicious communal violence, whereas today, it’s peacetime in a ‘new India’.

There are other noteworthy differences too between those lynchings and today’s.

In his inquiry report into the Mumbai riots, Justice B N Srikrishna concluded that Mumbai’s police were throughly communalised.

Yet, these same men, who have been reported in every communal riot to have proclaimed: ‘under our uniforms we are Shiv Sainiks’, arrested Shiv Sainiks under TADA.

Today, the first persons to be arrested are the survivors of the lynchings.

At that time, the perpetrators warned onlookers to keep their mouths shut.

Today, the perpetrators take videos of their attacks, such is their confidence.

Will the police use this evidence in court? Under what charges have they arrested today’s lynch mobs?

Certainly, no anti-terror law has been invoked, though the mobs have succeeded in terrorising an entire community and indeed, all those dealing in the transport of cattle, whatever their religion.

There is another significant difference between then and now. In Mumbai, only Shiv Sena chief Bal Thackeray justified the violence by his ‘boys’ in his writings in his newspaper Saamna.

The fact that Hindu eyewitnessses gave statements against other Hindus whom they had seen lynching Muslims shows that these acts were seen as wrong.

Indeed, in the mother-daughter case referred to above, it was a young Hindu who went to the police the very night of the incident to report what she had seen her neighbours do.

Today, responsible members of the ruling party at the Centre try to justify these lynchings. So does a vocal section of society through social media.

A decade after the Mumbai riots, Wahid Ali Khan, a politically well-connected man of some standing in his community, told this reporter that Muslims continued to feel so afraid outside their own areas that they hesitated even to get into an argument with a shopkeeper in Dadar (in central Mumbai, where the Shiv Sena has considerable influence).

However, at least since the last 10 years, the sight of youngsters in kurta-pyjama-burqa in public spaces across Mumbai, has been a reassuring one.

The 1992-1993 nightmare is finally over, the community once again feels this is their city.

But in state after state in North India today, Muslims are reportedly wondering if they can risk stepping out of their neighbourhoods in their traditional attire.

The recent story of the Aligarh engineer who wore a burqa for safety indicates the extent of the terror they feel.

If this loss of confidence, the feeling that you can’t be yourself in your own land, spreads across the country among our largest minority, then we need to acknowledge that we have reached a new low.

Forget the law and the police who are supposed to uphold it.

How long can we live with the knowledge that not even the might of an 80% majority can make a mere 14% feel safe?

Police harassing us to stifle anti-farm laws movement, say UP farmers’ leaders
West Bengal - Three Muslim youth lynched over suspicion of cow theft
Exploitation of workers - We Wear Their Oppression On Our Sleeves
Oldest nuclear reactors at Tarapur near Mumbai may be shut down