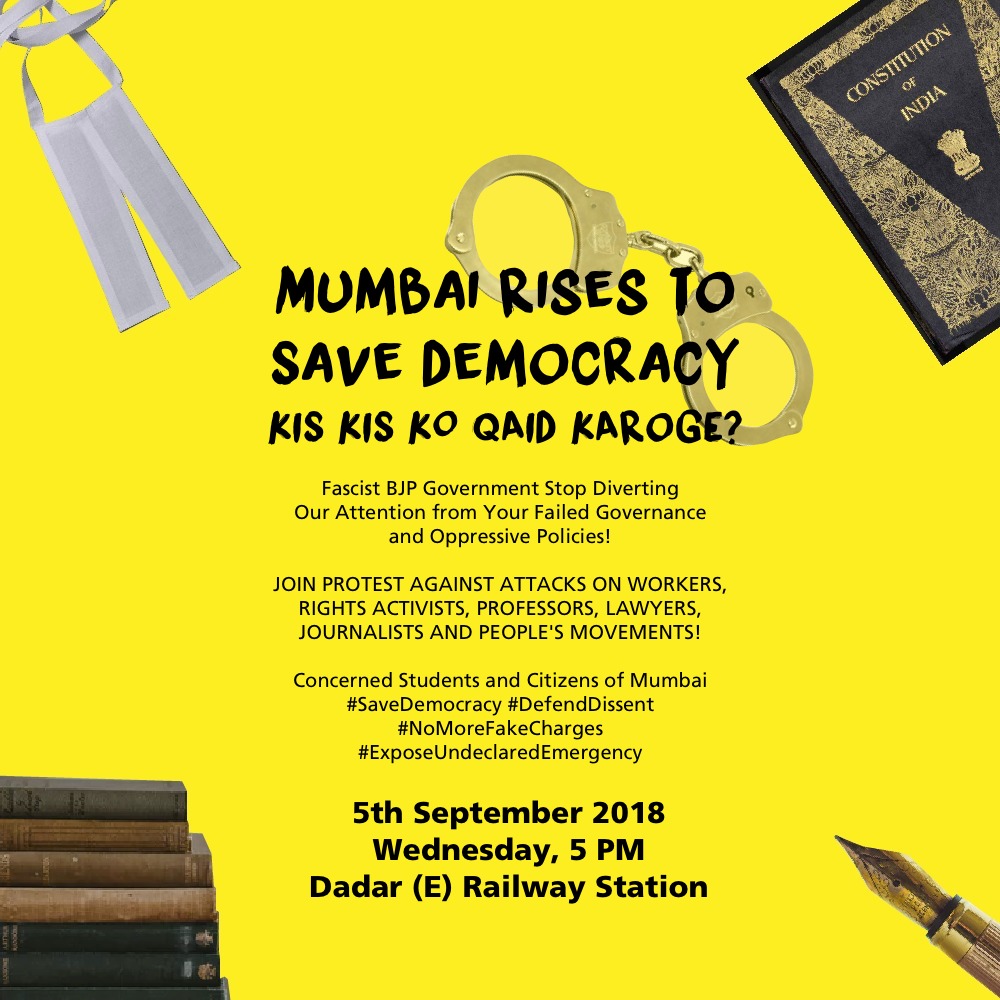 Fascist BJP Government stop diverting attention of people from your oppressive policies and the failure of governance!!
Join Protest on 5th September 2018, 5:00pm outside Dadar (E) Station, Mumbai
#NoMoreFakeCharges   #DefendDissent   #SaveDemocracy   #ExposeUndeclaredEmergency
Since the beginning of this year, Maharashtra police has been illegally raiding and randomly arresting citizens of this country. In January, five Reliance contract workers’ union activists were arrested. In June, police arrested activists Mahesh Raut, Rona Wilson and Sudhir Dhawale, Nagpur University Prof. Shoma Sen and Sr. Adv. Surendra Gadling. On August 28th, Advocate Arun Ferreira, Writer Gautam Navlakha, Advocate Sudha Bharadwaj, Writer-Activist Varavara Rao and Ex-Mumbai University lecturer and writer Vernon Gonsalves were arrested. At the same time, police raided and interrogated KV Kurmanath (journalist, The Hindu), Kranthi Tekula (journalist, Namaste Telangana), K Satyanarayana (professor, EFLU Hyderabad), Anand Teltumbde (writer, professor, activist), Naseem (writer and activist), Advocate Susan Abraham and Father Stan Swamy (a Jesuit priest and senior activist in Jharkhand).
All the arrests have been made in aftermath of massive protests held across Maharashtra after the attack on Bhima Koregaon visitors on 1st January 2018. Hundreds of dalit bahujans who came to the streets in protest, were brutally attacked by the Police during ‘combing operations’ and continue to be implicated in false cases filed against them. On other hand, the Pune police, which is in charge of the case, has diverted the attention from the master minds of the attack – Sambhaji Bhide (founder of the Shivpratishthan Sanghatana, former member of RSS) and Milind Ekbote (Executive president of Samasta Hindu Aghadi and Gau Raksha Abhiyan). The Police has used the Elgar Parishad – a program organized in Pune on 31st December 2017, by over 250 organizations across Maharashtra to commemorate the 200th anniversary of the battle of Bhima Koregaon – as an excuse, and falsely claimed that the attacks were instigated by organisers of this program. It produced a false narrative of “Urban Naxal” and charged 18 activists under Unlawful Activities Prevention Act (UAPA), in connection to the same case. The stories manufactured by the police in name of Urban Naxal, or the plot to assassinate PM Modi or many other flimsy plots, are being pitched to divert the attention from the real culprits Bhide and Ekbote, who are being given a clean chit by the Maharashtra Police at the behest of RSS backed BJP government.
This situation created by the fascist BJP government is nothing short of undeclared emergency because the constitutional rights of the citizens are being violated and there is a heavy clampdown on all voices of dissent! The urban naxal plot is an excuse to divert attention of citizens, before the upcoming elections. The BJP government wants to distract everyone from the failures of demonetization and destruction of jobs, disappearance of Vijay Mallya and Nirav Modi after looting thousands of crores of Indian citizens’ money, the unprecedented shooting up of petrol-diesel price, record fall in the value of rupee, corruption by government in the Rafael fighter jets contract, failure of the Aadhaar project, increasing costs of education and health services, organised lynch killings of Dalits and Muslims, instances of burning of the Indian Constitution, the meticulously planned sexual assault cases of Kathua, Unnao where BJP party leaders are involved, or the organized Hindutva terror outfits that have been caught manufacturing bombs and explosives, and have been arraigned in cases of assassinations of rationalists, anti-superstition activists like Gauri Lankesh, Narendra Dabholkar, Kalburgi! It is these violent and hate-spewing right wing outfits that are truly anti-Indian, anti-national and terrorist! The current dispensation is creating an atmosphere of hate, violence, lawlessness, ‘othering’ and a complete disregard of the Indian Constitution.

The activists, lawyers and professors whom the Maharashtra police has arrested are those who have been exposing these anti-people, unjust policies and actions of the government. Thus, their voices are being silenced by criminalizing and targeting them. Those arrested since January are lodged in Anda cells of various prisons in Maharashtra, while those arrested recently were prevented from imprisonment for the time being and are kept under house arrests on the orders of Supreme Court of India. The SC while denying police custody to Pune police, reiterated the value of dissent in a democracy. But Maharashtra police is unabatedly promoting a vicious media trial against them by circulating false material as ‘evidence’ in the case, to influence public sentiment. Since, the evidence in the court has not passed court scrutiny yet, hence Maharashtra police has received a warning from the Bombay High Court on 3rd September from indulging in such media trial. Also, even after more than 3 months have passed, police has not submitted charge-sheet on those arrested in June and have applied for further time to keep the activists falsely incarcerated for longer!
We, the students and citizens of Mumbai appeal to everyone that this is an extremely dangerous attack on the democracy of this country and the constitutional rights of every citizen. Before this undeclared emergency causes irreversible damage to our society, all of us must stand up against it. We strongly condemn and protest against such illegal acts by Indian government through Maharashtra police and their attempts to silence dissent and free thinking.
We demand from the government:
1. Immediate – unconditional release of those arrested under UAPA and during combing operations after the attack in Bhima Koregaon!
2. Immediate STOP to the impunity granted to right wing leaders and outfits, and arrest of Milind Ekbote, Sambhaji Bhide and members of Sanatan Sansthan for their illegal acts!
3. Immediate STOP to the illegal raids of the citizens’ houses and unjustified arrests of activists which is creating terror and fear of reprisals in the citizens, hurting dignity and undermining democratic rights of citizens and breaking all kinds of laws and court orders!
4. Repeal draconian UAPA law used as a tool to curb dissent and political opposition, and uphold the Citizens right to dissent!
Issued By:  Concerned Students and Citizens of Mumbai

India-Palestine Solidarity Takes A Leap Ahead At The Mumbai conference
Assam - NAMHRR submits comments on the Draft Population Policy
Kerala’s Covid numbers 'realistic' unlike states like Madhya Pradesh, Uttar Pradesh
#India - Muslims wary of Modi,Imam spells out what others could not