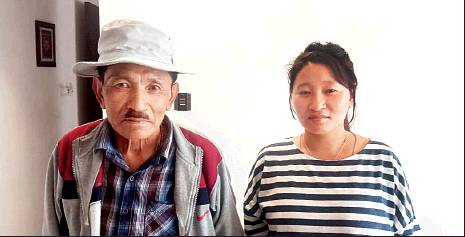 A cancer patient from Arunachal Pradesh was prevented from entering a flat in Mulund because of corona fear. Bombay Sarvodaya Friendship Centre owns a flat in Mulund’s Sainath Estate, which is offered as free accommodation to patients, activists and self-help groups. On Monday, Dorji Rinzin, whose chemotherapy at Tata hospital begins on Tuesday, was told that he couldn’t enter the building.

Rinzin, 74, accompanied by daughter Tsering Yangzom, reached Mumbai Monday morning and went straight to Sainath Estate in Mulund’s Nilam Nagar. They had earlier stayed in the same flat for a month when Rinzin was undergoing treatment. “Back then, nobody objected but on Monday the residents won’t allow us inside the premises,” said Yangzom. “We have come all the way from Arunachal Pradesh for his treatment and looking for a safe place to stay,” she added.

Yangzom then contacted the secretary of Bombay Sarvodaya Friendship Centre, Anil Hebbar, who was told by the residents that the society is not allowing outsiders to enter the building. “I spoke to both the current and former secretaries of the building who told me that the residents are following the preventive measures listed by the police and the BMC,” said Hebbar. Since the residents didn’t budge from their stand in spite of knowing Rinzin’s medical condition, Hebbar shifted the father and daughter to a guest house run by the Arunachal Pradesh government in Navi Mumbai. They have to travel for a longer time to reach Tata hospital, he said.

Gaikwad and Mohadikar did not respond to calls and text messages.

An official from the health department said that the government will take action against the residents. “The government’s instructions are clear about preventive measures. It has not said to restrict patients in this manner. We will inquire into the matter and take action,” the official said.

CBI Arrests Director Of Gas Corporation GAIL, 4 Others For Taking Bribes
Delhi HC appoints commissioner to report on denial of ration due to #Aadhaar
Kerala temple stops pujas for two days to mourn Muslim beaten to death
The Gujarat Model – Some Facts