Mumbai – The epicentre of urban environmental battles in 2019 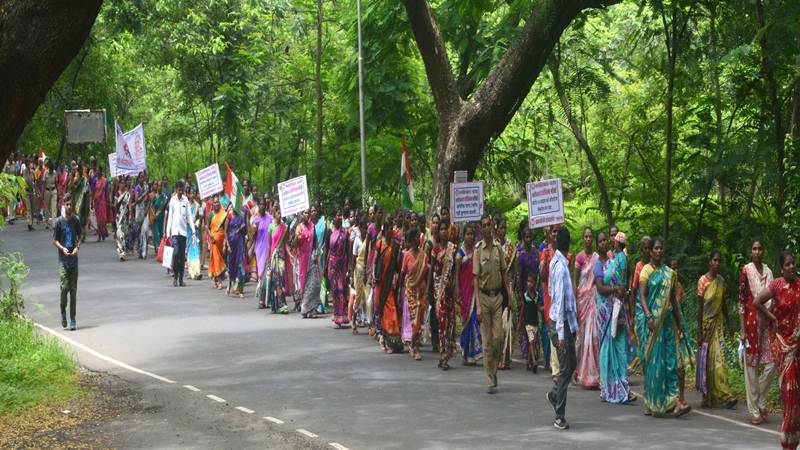 Mumbai: Aarey colony Adivasis and tribals protest against State Government for forcefully being shifted to SRA from their own land. at Aarey colony Goregaon East. Photo by BL Soni

Mumbai became the epicentre of urban environmental battles and took the lead in voicing its opposition.

Going into the next year it’s time for reflecting on the impact we have had on nature and environment. 2019 saw Indian cities make it to the infamous list of polluted cities! Seven out of ten most polluted cities were Indian! Delhi officially declared a health emergency. Instead of taking urgent remedial action, the country’s environment minister sat back and told the world that there was no link between pollution and human health. Urban cities are environmental hotspots that need urgent attention. Few cities reacted to the crisis.

Mumbai became the epicentre of urban environmental battles and took the lead in voicing its opposition. Four projects made headlines, the  Maharaj  Shivaji memorial, the Coastal road, the Bullet Train and of course, the most powerful of them all, the Aarey Metro car shed issue. Three out of the four issues were made (needlessly) to stand the test of judicial scrutiny. Needlessly because all of these projects failed to convince people that it was planned scientifically, financially or even more importantly whether they were needed at all in its present form.

First the memorial for the legendary Maratha King was planned in the sea off the coast of Mumbai on a rocky outcrop which had corals and rare marine life forms colonising the area instead of Raigad where he ruled over the masses who literally worshipped him. The CRZ notification an environment law which has the dubious distinction of being the law that has been amended so many times that it has ceased to be a law any more. Each amendment aimed at carefully decimating the spirit of the notification which simply said is to protect the coastal ecology and humans from sea level rise. Interim orders from the apex court has saved the day for Mumbai’s coastline when work on the project was stayed vide a Supreme Court interim order.

The coastal road project planned almost a decade ago promised at that time that the road would be built on stilts to avoid damage to the ecology and shoreline. Work began on the ground rather the seafront in total contravention of the original plan. Environmentalists and ecologists watched with horror as flattening of the intertidal rocks that were millions of years old with rare species of marine species got underway. Alien soil, rocks and all kinds of material found its way into the ecologically fragile inter tidal zone. The method used was reclamation instead of stilts ostensibly to save money! The Hon’ble High Court of Bombay stopped the destruction but alas this was soon undone by the Hon’ble Supreme court which felt that it is perfectly alright to reclaim the sea when the city was battling sea level rise.

The bullet train foray into the state was stopped by the new government in Maharashtra. The fierce opposition from farmers, local villages against acquisition of lands for the project tasted success thanks to Uddhav Thackeray’s Government decision to put brakes on the project.

The year witnessed an emergence of citizen power for protection of the environment. School kid Greta Thunberg emerged as the voice of the younger generation against destruction of the environment. Soon entire continents witnessed massive rallies from the youth who had one message for the generation in power today. The youth realised that their heritage, their chances for survival on this planet was being seriously compromised. No longer could the oxymoron “Sustainable Development” be accepted coming from world leaders who, over the past two decades, have done little except make tall speeches on global platforms without even knowing what they were speaking. The fallacy, the hollowness of world leaders could not be exposed better when the world saw leaders who earlier denied the existence of climate change being honoured as champions of the earth’ battle against climate change! Not to be taken for granted any more the youth rallied in large numbers to make their dissent known. India not unexpectedly failed to contribute as much to the cause given the disconnect of the overwhelming proportion of the populace with the environment.

Coming back to the historic battle, a unique one on this planet – the Aarey Metro car shed battle, one can only say that the fight was worth it. For five long years, citizens fought bitterly to protect the urban forests of Mumbai from getting needlessly destroyed to make room for a service station next to the Mithi river inside the forests at the expense of 4000 trees. The Hon’ble High Court expressed helplessness in the matter of Aarey and left it to the domain of the Hon’ble Supreme Court to tackle the issue. Before the matter could be heard in the Supreme Court, the Metro project proponents began chopping down full grown trees in the dead of the night. A shocked India watched as Mumbaikars, comprising of students, homemakers, professionals, tribals, ordinary citizens etc stormed the site at night, courted arrest and got beaten up by the police while trying to save the trees. Fulfilling the constitutional obligation to protect the forests and wildlife came at a high price. Students in far off Noida connected with the pain of the Mumbai citizens and moved the Chief Justice of India at his residence at midnight. For the first time in the history of Independent India, an environment matter was heard on a public holiday. On a holiday, the Hon’ble Supreme Court heard the issue and ordered a stay on the cutting of trees inside the forests of Aarey. Call it divine intervention if you must but it was nothing short of a miracle that the Devendra Fadnavis government, which maniacally pursued the needless destruction of Aarey, was toppled and a coalition government in which all partners were on the same page for Aarey was ushered in. The new government announced that it would look at alternatives to locate the car shed service station in another place. This meant Mumbai would have its Metro and Aarey too. Udhav Thackeray has emerged as the Santa Claus for the Save Aarey movement fighters.

The battle to save India’ ecology is at a stage where environmentally literate and concerned citizens are pitted against a system that treats nature as a disposable commodity. The time to save the environment has passed long ago, the race is to save ourselves now. The torch bearers of the environment movement, the youth of today, know this too well now. Whether the struggle to save mankind will survive or emerge stronger will be clearer in 2020. Until then it is Sayonara 2019 on a happy fighting note!

The author is a habitat conservationist working with NGO Vanashakti