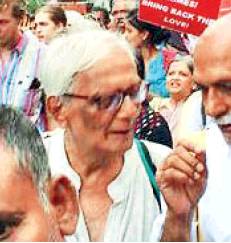 Daniel Mazgaonkar toured the nation with Vinoba Bhave, and continues to support various voices of democracy

Last July, he was spotted at the #NotInMyName morcha in Dadar. In 2014, he could be seen doing a jig at AAP candidate Medha Patkar’s election rally. He was part of the small group that met Jignesh Mevani at the Bombay Sarvodaya Mandal last month, and he made sure he was at Kanhaiya Kumar’s first Mumbai meeting in 2016.

At 82, Daniel Mazgaonkar is neither into yoga, walking, or bhajans. Nor does he stint on malai on his khakras and butter on his dosas – which he enjoys making for guests. What keeps Danielbhai — as this Gandhian is known — young is his adventurous nature and his commitment to changing the world. He’s happiest when at a demonstration, because says he, these are necessary manifestations of opposition to the State. “If someone gives a call, I cannot remain at home”.

Danielbhai was a happy-go-lucky Siddharth College student in 1954 when Jayaprakash Narayan gave a call to the youth to give one year to Vinoba Bhave’s Bhoodan (land donation) movement. Within a year of being approached by JP’s followers, friends of his trade unionist sister, the 20-yearold gave up college and eating meat, switched to khadi, and became a fulltimer with the Bhoodan movement.

What drew him to it was the chance to travel, admits Danielbhai. Vinoba was constantly walking across the country urging landlords to give up land to the landless. In 1958, he accompanied Vinoba through Gujarat, and met his future wife Hansa, also a full-time Bhoodan worker. Their wedding was conducted in the Sarvodaya office by a colleague, and instead of a red chuni, a towel was tied between them for the pheras.

Theirs was an unsettled life, for Danielbhai’s English skills made him much in demand in the movement. Even when they settled in Mumbai after their two sons were born, they lived on ‘Sarvodaya patra’ (donations received while selling literature doorto-door). The norm then (in the mid’60s) was one paisa a day, recalls Danielbhai. “So we would all get 30 paise a month,” he said, “But some Gujaratis would often give 10 paise.” His friends chipped in to pay his sons’ fees; he still regrets never having bought toys for them.

But the couple took the kids everywhere, be it padyatras or Vinoba’s Paunar Ashram. The boys visited him regularly the 14 months he was in jail during the Emergency. Today, both are activists in rural Gujarat, and he’s proud neither settled for a regular job though both qualified for one.

Diagnosed with a heart problem two years ago and advised to stay more at home, the octogenarian discovered a new world in his computer. As international coordinator for the Sarvodaya movement, Danielbhai spent a year in the West, and then set up the Bombay Sarvodaya Friendship Centre at his home. It is the first stop for foreigners researching Gandhi. Most of these visitors are idealistic youth who find in their white-haired host a kindred soul. Earlier, he would take them to meetings. Today, they watch Lagaan and Rang De Basanti with him on his computer, and play the guitar while he shakes a leg.

Danielbhai, who never loses his cool while debating Gandhi v/s Mao with activists less than half his age, attributes his youthful spirit to his mentors. “Vinoba Bhave gave us the goal of spreading love. I like to see others happy and I myself laugh a lot. JP, who treated me like a brother, was active till the end. He’s my inspiration.”

Next month, Danielbhai leaves the city he has roamed in all his life, to settle in Vadodara with his sons. But time won’t hang heavy on his hands. Already, his large family of activists in Mumbai have assigned this “evergreen” Gandhian work in Gujarat.