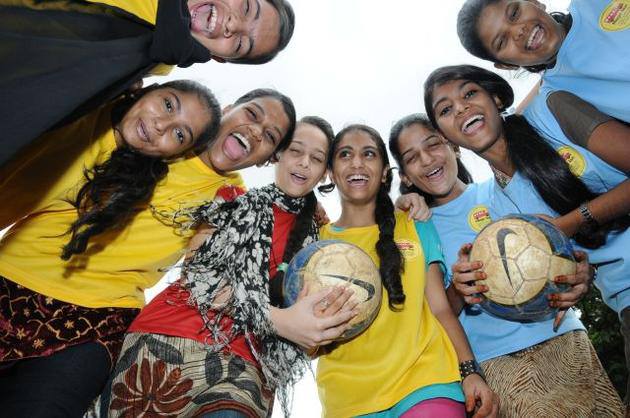 They started off as a secret sports club. What brought them together was their shared love for football, a game they couldn’t dream of playing owing to their conservative family backgrounds. After all, how could young girls, who weren’t even allowed to step out of their homes without the ‘hijab’ (veil), run around kicking ball in an open field? But they showed exceptional courage when they defied parental dictate to pursue their passion for the sport.

Three years back, Sabah Khan, Salma Ansari, Sabah Parveen, Aquila, Saadia and 40 other girls got out of their homes in Mumbra, a small town 40 kilometres from Mumbai, Maharashtra, to play football. Today, this group that calls itself Parcham, inspired by Asrar ul Haq Majaz, an Urdu poet who saw women as crusaders with an inherent quality to revolt against exploitation and injustice, has truly lived up to its name. They have not only broken gender stereotypes by regularly playing football but have been responsible for bridging the gap between the Muslims and the Hindus in their communally volatile city.

Sabah Khan, the captain of this unique all–girls team, recalls how their journey of change began, “Around 2011, a bunch of us were approached by the NGO Magic Bus that uses sports as a means to help poor children lead a better life. They wanted to teach football to both girls and boys but we told them that in Mumbra Muslim girls cannot take up a sport let alone play alongside boys. That’s when they decided to exclusively train girls who were keen to try out something they had only dreamt of.”

The target was to put together a group of 40 girls but that was easier said than done. “Most of us hail from families that struggle to make ends meet. We can never really spare time for fun and games. We study, chip in at home or work. That’s why we were unable to personally go to motivate girls to join in.

At the outset, the girls decided to call their team ‘Parcham’. Aquila, one of the founding members, narrates the story behind it, “We decided to call ourselves ‘Parcham’ as we are inspired by Asrar ul Haq Majaz, better known as Majaz Lakhnawi. Through his romantic, revolutionary verses, Majaz urged women to look at the hijab not as a barrier but as a flag or banner. He has written: ‘Tere maathe pe ye aanchal bauhat hi khoob hai, lekin tu is aanchal se ik parcham bana leti to achcha tha… (The veil covering your head and face is beautiful, but if you make a flag out of it, it would be better)’. We, too, have transformed something that many see as a sign of repression into a symbol of revolution.”

Through sports Parcham strives to build a just and equal society that is respectful of diversity and celebrates difference and interdependence. Their mission is to empower marginalised communities to access their fundamental rights, creating spaces for dialogue among diverse sections of society. “And our one great achievement has been getting official recognition for our struggle to get a playground for the girls,” says Aquila.

When they met with MLA Jeetendra Awhad he was amazed to see this strength of association. He told them that it was perhaps for the first time that 900 girls had got together to ask for a playground to be reserved for them. He also assured them of their very own space to play.

Saadia’s brothers still have no inkling. “After I won a trophy at a tournament I told them that it was a friend’s. There are many like me who cannot yet be completely honest with all their family members. We don’t want to make them unhappy nor do we want our freedom curtailed. This way we all get what we want,” she says.

Adds Salma Ansari, 22, who has supportive parents and is pursuing an MBA degree, “What we need is for the society to accept that girls have an equal right to public spaces; that they too deserve to experience the joy of being able to run free, kick a ball, hold a bat, sprint, jump or swim. Nowadays, we are trying to break gender stereotypes by training a group of 50 young boys and girls together.” The religious divide, too, has been overcome with the inclusion of girls from other faiths.

Simran, 15, the youngest member of the team, is a Sikh. “We have so many misconceptions about other religions. But perceptions and attitudes change when we meet and interact. Being in Parcham, I am learning about gender, equality, justice… Watch out, I am a feminist in the making!” she says emphatically.

What’s next on Parcham’s agenda? “We want to set up a resource centre for our girls, complete with books, newspapers, computers and a wi–fi network. Every Saturday, we plan to hold meetings where we can discuss the latest news and concepts like secularism and citizenship to enable everyone to think and form opinions on subjects they are passionate about. The centre will be a safe haven for Muslims and non–Muslims to build friendships,” says Sabah.

In the home town of Ishrat Jahan, the young woman who was tragically shot in an encounter in Ahmedabad in 2004, these girls are gearing up to drive out prejudice and hatred. (WFS)

Supreme Court notice to govt on PIL over Aadhar #UID
How Nodeep Kaur rose from an activist Left, Dalit Punjab family to a cause herself in jail
AIDWA Condemns Murderous Attacks by RSS-BJP Goons in Tripura
Lockdown: Uttarakhand Disregards Stranded Van Gujjars