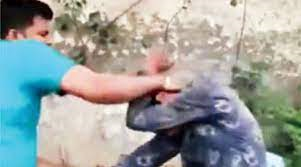 By Vidya Bhushan Rawat*
A lot has been said about the barbaric incident of a Muslim boy being beaten, scolded and denied water to drink at a temple complex near Ghaziabad. Many people expressed shock and sorrow and rightly expressed solidarity with the boy. Many said that their ‘Hinduism’ does not reflect this and that they are ashamed of the incident. Many apologised that their idea of India was not this where an innocent boy is denied the right to drink water.

All those who condemned the incident and expressed solidarity with the victim deserve kudos. But the issue should not be seen in isolation. It is part of a culture that we are part of and feel proud of. Water has been used as a discriminatory practice in India for centuries. Dalits have been denied it in the villages.
It is not that simple as we assume. Just a year back when I was travelling to a village which had Mushahars, on one side, and Bansfods, on the other, there was a water war between the two communities. The Bansfod families blamed the Mushahars for treating them as untouchables and not allowing them to fetch water from their hand pump.

I decided to have first hand experience and told a Bansfod man who was quite old that I don’t trust what they are saying. I felt that both these communities are extremely marginalised and isolated within the periphery of the Scheduled Castes in Uttar Pradesh.
So, the old man took me towards the Mushahar location, which is just the other side of the 6 ft road. A Mushahar woman was using the hand pump and this was the conversation which took place:
“You don’t allow Bansfods to fetch water from this hand pump?”, I queried.
“No, it is not true, we give them water”, she said.
The Bansfod man intervened abusively: “Do you allow us to fetch water ourselves? They don’t allow us fetch water. She would pour it from her bucket.”
“Why don’t you allow them to fetch their water? You are neighbours?”, I asked.
“How can we allow them to touch our hand pump? They are chhot jaat (lower caste)”, she replied.
Soon others gathered and communities got divided. I requested the local administration, and they help in getting a hand pump for the Bansfod basti.
Clearly, water is a source of untouchability even today and even among the castes who are considered as untouchable. Dr Baba Saheb Ambedkar emphasised and explained it beautifully when he said that India is a ‘graded’ system which provides ‘ascending order of reverence and descending order of contempt’.Let us not forget the history of water as a fundamental right was created by Dr Ambedkar on March 20, 1927 at the famous Chavadar Pond, Mahad, Bombay Province. How barbaric were the Brahmanical upper castes that they resisted Dalits drinking water from that pond which they felt was their sole ‘domain’.
Laws passed by the government does not matter unless there is a will to implement them. The British realised this and hence made many political decisions related to the rights of the untouchables, much to the discomfort and outrage of the savarnas (“upper castes”).
On August 4, 1923, the Bombay Legislative Council (BLC) passed a resolution allowing the depressed classes and untouchables to access water to drink from the Chavadar Talab in Mahad which was part of Bombay Province at that point of time. Unfortunately nothing happened. There was no will to implement this law at the ground level.

The talab or pond was located in the heart of the city and anyone coming from village to the Mahad taluka for official work or shopping purposes needed to drink water from this but it was forbidden for the untouchables. Dr Ambedkar actually narrate this beautifully:
Mahad movement created history, yet we recall only Dandi March, but not the satyagraha that gave Dalits a definite direction”The Untouchables, either for purposes of doing their shopping and also for the purpose of their duty as village servants, had to come to Mahad to deliver to the taluka officer either the correspondence sent by village officials or to pay Government revenue collected by village officials. The Chavadar tank was the only public tank from which an outsider could get water. But the Untouchables were not allowed to take water from this tank.
“The only source of water for the Untouchables was the well in the Untouchables quarters in the town of Mahad. This well was at some distance from the centre of the town. It was quite choked on account of its neglect by the Municipality” (“The Revolt of the Untouchables”, Dr Babasaheb Ambedkar Writings and Speeches, Vol 5).
On March 19-20, 1927, there was a conference organised by the depressed classes on the issue of civil rights, and Dr Ambedkar was the chief guest and guide of the event. Over 2,500 delegates participated in it. The conference decided to start a satyagraha led by Dr Ambedkar and drink water at the Chavadar Talab. This was a historic moment.
Dr Ambedkar and the other satyagrahis defied all the public pressure and reached the Chavadar Talab, drank water and got ‘implemented’ the resolution passed by the BLC. Can you imagine a public protest to do so? How did the public react to this?
The rumour brigade was active. It spread the word that the satyagrahis at Mahad had next planned to enter the temple. The caste forces decided to retaliate. The conference ground was attacked and many people got injured. Intimidation happened. They purified the Chavadar Talab again by performing puja, using ‘cow dung’ and ‘gaumutra’.
One has to understand the whole dynamics of the fight against irrationality and inhuman practice. The fight for Mahad’s water rights led by Dr Ambedkar had great values with like minded people supporting it.
The Mahad municipality which declared public places open for Dalits and depressed classes was under the leadership of Surendranath Tipnis, a Maratha. It is he who invited Dr Ambedkar to address the people in Mahad. There were other speakers too and notable among them AV Chitre and GN Shahasrabuddhe, a Chitpawan Brahman. All these gentlemen remained with Dr Ambedkar in his fight against the caste system and irrationality.
Dr Ambedkar decided to take the fight against this, hence he planned another conference at Mahad on December 26-27,1927. Cases were filed against him and he was not allowed public space to hold the conference. Finally, he could do it at an individual’s place who offered him the space. On December 25, 1927, Manusmiriti was burnt at Mahad by the followers of Dr Ambedkar led by GN Shahsrabuddhe.
The dirty reality of Indian caste order is that it resisted with full throat the entry of Dalits in the temples and their right to drink water from public places. Even after the BLC passed the resolution or municipality paved the way to access water rights, the caste forces remained determined not to allow this to happen. They used all the tricks right from public dominance, economic boycott to legal challenge, but finally lost the battle at the Bombay High Court in 1937 which upheld the assembly resolution and allowed all public places open to depressed classes.
It is important to remember that in this fight against discrimination the battle remains incomplete unless the forces which have enjoyed the fruits of power too feel that something is wrong. Dr Ambedkar was fighting against Brahmanical forces on purely ideological grounds and it was good that some of his most important associates happened to be born in the communities who discriminated.
The Mahad movement that created history, yet we recall only Dandi March of Gandhiji, but not the Mahad satyagraha that gave Dalits a definite direction to fight for their rights legally and politically. The modus operandi of the caste forces is the same despite the fact that Dalits have now been given the right to water. Yet water still remains an instrument of discrimination in our society.