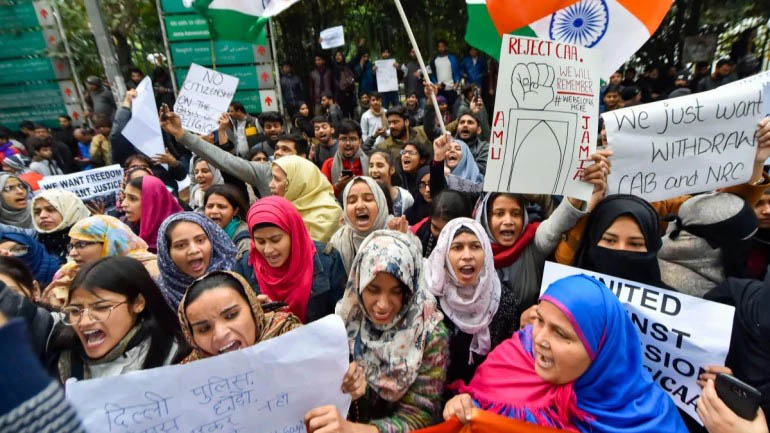 Mohammad Faizal’s family claims that the UP police has registered false cases against him.

Police chase after protesters in UP’s Bahraich at an anti-CAA demonstration. Photo: PTI

Jaipur: The Uttar Pradesh police on Monday arrested Mohammad Faizal, a Rajasthan based 24-year-old Muslim advocate who had gone to Shamli to offer legal aid to protestors who had been arrested during an anti-Citizenship Amendment Act protest in UP.

The UP police has registered an FIR against Faizal under Sections 145 (Joining or continuing in an unlawful assembly, knowing that it has been commanded to disperse), 149 (Every member of unlawful assembly guilty of offence committed in prosecution of common object), 153A (Promoting enmity between groups on grounds of religion, race, place of birth, residence, language, etc and doing acts prejudicial to maintenance of harmony), and 505 (statements conducing to public mischief) of the Indian Penal Code.

The police have identified Faizal as a member of the Popular Front of India (PFI), a Muslim organisation that is seen as radical, its cadres present mostly across Kerala and Karnataka.

“Faizal along with three other men was involved in inciting violence and distributing objectional pamphlets. We have also recovered data from his phone as proof that he is a PFI member,” Dharmendra Yadav, a police officer at Shamli police station told The Wire.

However, the family of the advocate has denied any links to the PFI. They claim that the UP police had registered false cases against him.

“Faizal had been practising since the past three years but he didn’t face any issues. The police have booked him in false cases and kept him in custody so that he shall not be able to raise a voice for the innocents. It’s absolutely absurd that the police is linking him to PFI,” Mohammad Haneef, Faizal’s father, told The Wire.

“We have also written to the National Human Rights Commission in Delhi requesting immediate intervention for the release of Faizal but there has been no response so far,” he added.

Advocates have requested the Kairana Bar association to intervene in the matter.

“Advocates from across the country are travelling to UP to assist the arrested protestors. Faizal is a part of National Confederation of Human Rights organisations (NCHRO) and he was asked by NCHRO to go to UP to offer legal aid but the police arrested him along with a few relatives of the protestors who were seeking help from Faizal,” Ansar Indori, a human rights advocate said.

“The police is falsely labelling him as PFI member. NHRC has informed the Kairana Bar association with hopes that they intervene but unfortunately, there has been no response,” he added.

Bhima Koregaon Case -Varavara Rao bail: Bom HC questions if keeping him in custody will be detriment...
Modi’s Gujarat not quite Swachh
Dadri again?: Muslim hotelier attacked by cow-rakshaks in Jaipur, police and media collude
#RIP - ‘Mother of PIL’ ​Kapila Hingorani dies at the age of 86