Muzaffarnagar Rape Cases – The Law Is Under Trial Here #Vaw 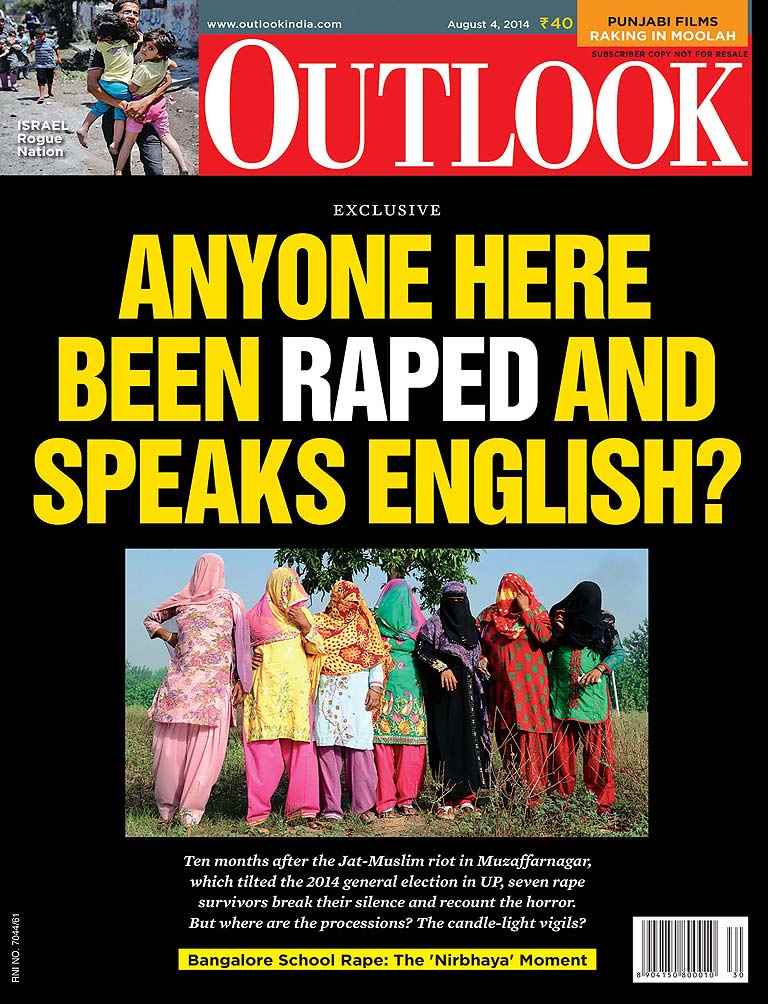 “If the government does not do anything in the next few days, I will do what even Damini did not do. I will set myself and my sons on fire in the middle of Muzaffarnagar city,” says S on the phone, two days after two rape accused in her case were granted bail. When I had met her in July, S was about to start her ‘Stitching Training Centre’ along with her husband, determined to fight her case till justice was hers.

The Damini she refers to you may know as Nirbhaya, or more baldly as the “Delhi gangrape victim”. S was gang­raped by three men from her village in Lankh on September 8, 2013, in Shamli district (see Outlook story Shadow Lines, Aug 4, 2014), but her ordeal, as well as that of hundreds of women sexually abused and gangraped, was subsumed within a broad category that came to be called ‘the Muzaffarnagar riots’. It was a madness that—according to the ‘official’ record of the Uttar Pradesh government—led to 60 deaths, seven rapes and the displacement of 40,000 people. Never mind if we could actually be looking at some 200 deaths, 1,20,000 people displaced and hundreds of unreported mass rapes.

S’s trajectory has crossed the Nirbhaya case in several ways. The Criminal Amendment Act, 2013, drafted by the Verma Commission set up in the wake of the protests following the December 16, 2012, Delhi gangrape, came into force in February 2013. While the Act introduced multiple amendments in laws related to sexual violence, lawmakers for the first time also took cognisance of the systematic violence against women during communal riots in India. As a result, a crucial amendment—Section 376(2)(g)—­was included in the Indian Penal Code.

Among other things, the section states, “Whoever commits rape during communal or sectarian violence shall be punished with rigorous imprisonment for a term which shall not be less than ten years, but which may extend to imprisonment for life, which shall mean imprisonment for the remainder of that person’s natural life, and shall also be liable to fine.”The Muzaffarnagar riots broke out five months after this vital addition to the law. The violence erupted on September 7 and continued well into the next day. Seven women, all gang­raped on the morning of September 8, filed cases. These would be the first in Indian history to be tried under Section 376(2)(g). The legal trajectory of these cases needs to be examined in the light of its precedent-setting import.

FIRs: The first information report for five out of the seven petitioners was filed within three weeks of the gang­rapes. The sixth case was filed on October 9, 2013, while the seventh case, that of S, took the longest to register. S had sent her FIR on October 22, 2013, five weeks after the incident, to the Fugana police station in Muzaffarnagar through registered post in which she also named the three accused. The police neither filed the FIR nor ack­nowledged receipt of her complaint. It was only when her counsel, Vrinda Grover, who is representing the seven women in court, handed over a copy of her complaint to the lawyer representing the UP government that the FIR was filed on February 18, 2014.

Medical examination: The law mandates a medical examination within 24 hours of filing the complaint. All the seven women were gangraped on Sep­tember 8, 2013. Their medical examination, however, was conducted bet­ween September 29, 2013, and February 22, 2014. It is because of this gap between the dates of the incident and the tests that the medical reports remained inconclusive in ‘proving’ rape.

The Allahabad High Court made the delay in the filing of FIRs and medical examination to grant bail on October 15, 2014, to the gangrape accused in the case of Fm, one of the seven women. It did so on grounds that “there was an inordinate delay of 14 days in filing FIR and that her testimony could not be accepted as it was not corroborated by medical evidence in the marks of injury on her body”. The state authorities chose not to appeal against this order.

Compensation: The Supreme Court, on March 26, 2014, while responding to several writ petitions related to the Muzaffarnagar communal violence, including one by Vrinda Grover and Kamini Jaiswal on behalf of the seven women, directed the UP government to pay compensation to all the seven gangrape survivors within four weeks, before April 26, 2014. The seven women had filed applications for compensation on April 9, 2014.

This compensation amounted to five lakh rupees in addition to other benefits. While five of them received the compensation on May 8, 2014, the sixth got it on May 22, 2014, and the seventh only on October 25, 2014, more than a year after the incident when counsels Grover and Jaiswal filed a contempt of court petition in the Supreme Court on September 15, 2014.

The apex court had, in addition to this compensation, also asked the UP government to provide financial and other assistance to these women to help them rehabilitate themselves. The state government, however, provided the same blanket compensation for loss of moveable and immoveable property that it provided to all families who were victims of the communal violence. 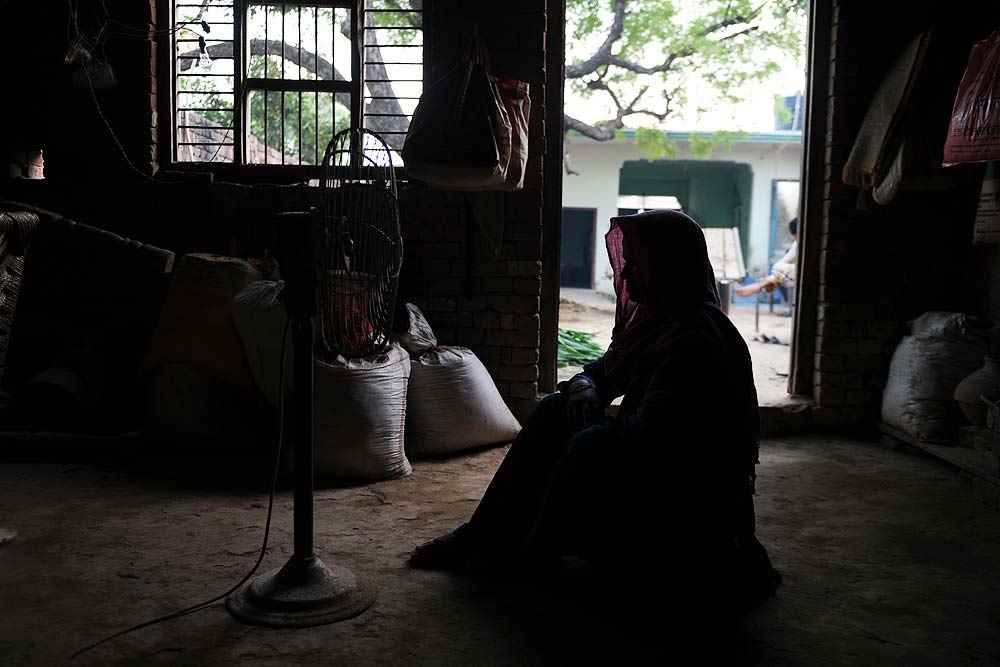 K Her nightmare unfolded in Phugana, in Shamli district. (Photograph by Jitender Gupta)

Role of the state and police: In the same March 26, 2014, SC judgement, the court blamed the UP government for negligence. It said, “We prima facie hold the state government responsible for being negligent at the initial stage in not anticipating the communal violence and for taking necessary steps for its prevention.” The police had been unable to control the violence during the riots; it is only when the Centre sent paramilitary forces that the victims could be rescued.

The investigation into the cases also started a month late. Kalpana Saxena, a superintendent of police in Muzaffar­nagar district, said the police got delayed in investigating the riot-related sexual assault cases because the initial team of officers formed in September did not include any women. Mala Yadav, the investigating officer, was included in the Special Investigations Team as late as November 2013.

In this entire period and afterwards, the seven rape survivors filed several written complaints with the police, clearly mentioning the threats to them and their family members by the accused men and their kin. Living in extremely vulnerable conditions in relief camps in this time, they were provided police protection as late as nine months after they filed the FIR.

There were also specific and grave complaints against Mala Yadav. K, one of the rape survivors, had said, “When Mala Yadav, the investigating officer, came to record my statement, she asked people in the camp if they had seen my torn clothes on the day I reached the camp. She even told me that having a full-time guard sent by the Supreme Court is not enough and I should compromise.” Fm too corroborated the ins­ensitive investigation. When she came investigating her case, Fm said, “she asked the other people in the camp, ‘Did you see her crying? Did she tell you about the rape?’” Apparently, the men she had mentioned in her complaint knew each word of what she had told Yadav. “I am a woman who is revealing that I was raped publicly, unlike so many others. Why will I lie? During the period of investigation in the camp, even those who didn’t know I was raped also got to know because of the police’s lack of discretion.”In fact, Kf had also submitted an application to the National Human Rights Commission on May 29, 2014, detailing how Yadav’s investigation was biased and if her case could be transferred to an impartial investigating officer. No action was taken until four months later when counsels Grover and Jaiswal filed a contempt of court petition in the Supreme Court in September and an enquiry was finally initiated against Yadav on November 2, 2014. She was removed from these cases as late as November 23, 2014, more than a year after the gangrapes.

X, husband of T, another gangrape survivor, too had claimed that the police recorded videos of their statements and then showed it to the accused in the village. They also used subversive tactics on occasion to dissuade the women. In January 2014, X’s cousin was booked for rioting, robbery and even having links with the terror outfit Lashkar-e-Toiba! When this was reported in the media, the charges were dropped overnight.

Nor was any action taken against the police officials who failed to register an FIR despite S’s written complaint, which amounts to an offence under Section 166 A of the Indian Penal Code.

Arrests: The apex court had on March 26, 2014, told the UP government to proceed swiftly with the investigations and arrest all the accused. Only three of the 29 accused named by the seven petitioners had been arrested in the six months after the report was filed. It was only after the counsels filed the contempt of court petition, six months after the SC judgement and a year after the first FIR was filed, that the state administration got into action and arrested the other accused, a year and three months after the rapes.

In this interim, the women, all from working class backgrounds—ironsmiths, agricultural labourers, carpenters et al—were regularly intimidated by the accused. The latter hail from the dominant landowning Jat community, far more influential in terms of money and influence over the state machinery.

7. Trial: Section 309 of the CrPC mandates that a trial in the case of rape should be completed within two months of the filing of the chargesheet. The trial hasn’t even begun in any of the seven cases yet, however the accu­sed have already started procuring bail. Three of the accused have already been granted bail, and on January 9, 2015, two out of the three accused in S’s case were granted bail as well. And the very next day, S’s niece, who had gone to the local pds shop to collect ration, was intimidated by the family of the accused.

Commenting on the situation, the women’s counsel, Vrinda Grover, says, “The delay in starting the trial of these cases is not by default but by design. The state government is ind­ulging in votebank politics by protecting the dominant community in the area to which the accused belong. The seven women are constantly threatened, and fear for their lives. Two constables are not enough to save their lives. The case must be transferred outside Muzaffarnagar to Delhi so that they can depose freely in a court of law.” The counsel’s demand for protection of the witnesses intensified after the witness in the rape case against godman Asaram Bapu was shot dead on January 11, 2015, in Muzaffarnagar itself.

Grover also says that the state government initially did not invoke Section 376(2) (g) which deals specifically with rape survivors during communal violence. “It is only after our insistence that the new law must be included in the proceedings of these seven cases that the police finally included it in the chargesheets in May,” says Grover.

S has not stepped out of her house ever since the gangrape accused in her case were granted bail. She has also temporarily shut down her stitching training centre, her only source of livelihood.  “What does it say when the accused roam scot free and the victims are forced to shut themselves up inside the house?” she asks. For an answer, there is only empty air.

Ijurupa, where a family of four nailed down a 72 MT Vedanta mining proposal
India - Medha Patkar asks Can We Be Proud Of Such Independence? #Song
Salafis risked their safety to condemn terrorism, British author finds after extensive research
#FTIIMahabharat - Adoor Gopalakrishnan- Chauhan a simpleton, should quit voluntarily