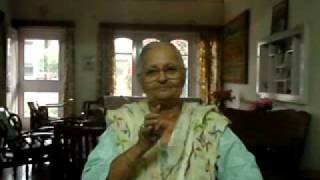 I am a proud grand daughter  today , the best new year gift was the call from  My 88 year-old Nani, Pramod Dutta telling me she  got  two awards, one was for short stories by Haryana Sahitya Academi and one was  Swargvibha Tara Kshatriya Samman for her contribution to hindi literature , which she wanted I re  check as Dr B P singh from Bombay had called  and informed her. I told her,’ Nani who will lie about an award, ‘laughingly. I called up Dr B P  Singh, who asked me to check his website Swarg Vibbha, and there it was her name among 5 for their contribution. My Nani  has two novels to her credit one is ‘ Pratiksha’, Published in 20i1

and one is ‘ Bhugtan’ , which was published in 2013 , both were widely appreciated. She got calls from London, from a lady who read her book, which was quite unbelievably to her.

You can order the books here online I

I had recorded her poems five years back, while I visited her at her residence in Panchkula, Haryana. In the video she recited an old Punjabi Poem- ‘Rabbu’ penned by  Gopal Batalwi . The Poem is an interesting conversation  between God and a Coin as in who is superior ? not to miss , her explanation 🙂

This a hindi poem’ Badhiya HaaL Hai’,…. penned by Nani ji, tells agony of old age and the desire to continue as well

She has been writing consistently for more than six decades, her stories have been  published in  Sarita, Hindi tribune, Dainik bhaskar and many other hindi papers and  Magazines

I will be soon be uploading all her poems and short  stories  .The news item for her award is below

Chandigarh | Wednesday, Jan 1 2014 IST The Haryana Sahitya Akademi today announced the names of writers who would be awarded for their outstanding contribution to Hindi, English and Haryanvi literature in the year 2013. Principal Secretary to Chief Minister Dr K K Khandelwal, who is also the Executive Vice Chairman of Akademi, said that 15 books of Hindi, English and Haryanvi languages have been selected to be awarded with “Shrestha Kriti Puraskar” 2013.

Each award winner would be given a cash prize of Rs 21,000 and a memento. Dr Khandelwal said the writers to be honoured towards Hindi literature included Radhey Shyam Shukal from Hisar for his poem ‘Kaise Bune Chadaria Sadho’, Manjit Sharma Meera from Chandigarh for her story ‘Atamhatya ke Shano Mein’, Sandeep Kapoor from Ambala City for his child literature ‘Sab Rishton Mein Desh Bada’, Manju Dalal from Bahadurgarh for her Novel ‘Panah’, Kamlesh Choudhry from Kurukshetra for ‘Khoya Hua Gaon’, Dr Surender Gupt from Ambala Cantt for his short story ‘Yahan Sab Chalta Hai’, Krishan Kumar from Rohtak for his play ‘Seediyan Swarth Ki’, J K Verma from Bhiwani for his book ‘Ch. Ranbir Singh Hooda‘ and Jagat Singh from Ambala Cantt for ‘Savindhan Sabha Mein Haryana’. He said that Dr Balbir Singh from Karnal would be awarded for his prose and poetry ‘An Unweeded Garden’ in English literature.

Those who would be awarded for their contribution towards Haryanvi literature under Shrestha Kriti Puraskar 2013 included Harikrishan Dwivedi from Kurukshetra for his poem ‘Masaal’, V M Bechain from Bhiwani for his play ‘Shakuntala Arr Dushyant’, Acharya Mahavir Prasad Sharma from Karnal for his play ‘Ek Rapia Arr Ek Int’, Madan Gopal Shashtri from Hisar for his folk literature, culture or art ‘Haryanvi Gramya Jeevan aur Reeti Riwaz’ Shivtaj Singh from Narnaul for ‘Haryanvi Lok Kavya evm Natya ke Gaurav Master Nekiram’. Dr Khandelwal said that grant had also been sanctioned for publication of 40 books and these writers would be given Rs 10,000 each.

He said, Dr Indu Gupta has won the first prize for her story ‘Aap ya Mein’ under Hindi Kahani Pratiyogita 2013 and Madan Sharma Rakesh and Pramod Dutta have won second and third prizes for their stories ‘Apne Apne Pankh’ and ‘Diwali ka Uphaar’ respectively. They would be given cash prizes of Rs 5000, Rs 4000 and Rs 3000 respectively, he added. UNI DB AD VN2230 NNNN Read more here- http://news.webindia123.com/news/Articles/India/20140102/2312976.html