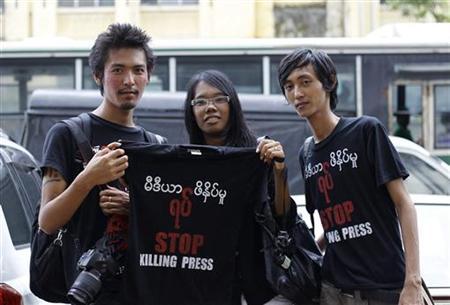 Editors of the Burmese-language Voice Weekly and The Envoy told Reuters that Myanmar’s censorship board had informed them they could resume publishing by August 18, without giving a reason for why the suspensions would be lifted.

Publication of the journals was halted indefinitely late last month, promoting an outcry among journalists who are enjoying freedom to publish not seen under the five decades of authoritarian military rule that ended in March last year.

The quasi-civilian government has loosened its grip on the press as part of a surprise reform drive. But some press censorship still remains and journalists pushing the boundaries of the restrictions have complained that suspensions are tantamount to intimidation.

Nearly 100 journalists rallied against the suspension in Yangon on Saturday and about 60 protested in the second-biggest city, Mandalay a day later, most wearing black T shirts saying “stop killing the press”.

“The reason for lifting the suspension, I think, would be because of the rallies by the journalists,” said an editor of another journal, who asked not to be named.

Monday’s edition of the Messenger journal blacked-out its entire front page and cited a line from the constitution that guarantees freedom of expression.

The Nation journal went a step further, uploading on its Facebook page what it said was a censored copy of its front page story of the protest, which was covered with crosses in red ink.

It was not known exactly why the two publications were suspended. The Press Scrutiny and Registration Division, as the censors are called, said they had “violated rules and regulations”, without elaborating.

The Voice is also facing a lawsuit, lodged by Myanmar’s Ministry of Mines, after it published a report alleging graft by ministries under the previous government.

Myanmar’s government has insisted it will scrap censorship as soon as a press law is promulgated, but journalists are concerned some restrictions will remain and recommendations for the legislation might be ignored.

The government’s mouthpiece, the New Light of Myanmar, carried an editorial in its Sunday edition, apparently in response to the protests, calling for patience and reiterating that censorship would soon be abolished.

It said the country was “not still accustomed to the freedom we have not enjoyed before” and to “rush could ruin results.”