Namaste Trump? Modi’s one upmanship key to ‘welcoming’ US President in Ahmedabad 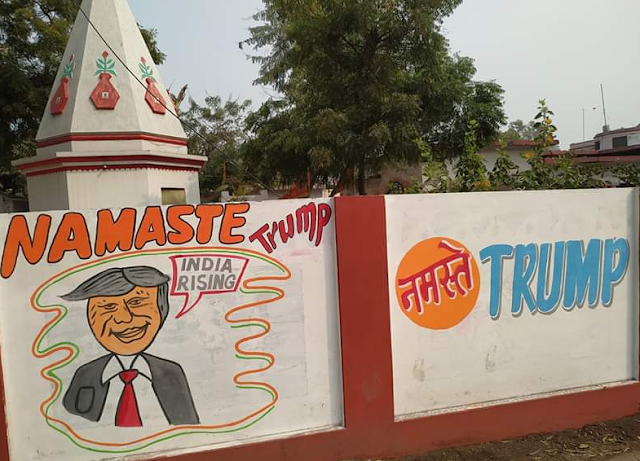 What is common between Indian Prime Minister Narendra Modi and American President Donald Trump? A king size ego, giant size events and an obsession with walls that separate rather than bridges that bind!
Modi’s Gujarat is fond of comparing his brainchild, the Statue of Unity (SoU) as being twice as high as America’s Statue of Liberty. Again, Houston’s ‘Howdy Modi” last year should be both outclassed and outnumbered two to one in the ‘Namaste President Trump’ at Ahmedabad.

If the US President is building a 576-mile wall, costing $20 million a mile, to fence off his country from Mexico, the civic body in Prime Minister Narendra Modi’s home state of Gujarat is at work building a wall of its own too. Only that this one is to keep the slums of his model state out of Trump’s sight.
Then again, the Trump extravaganza is the inaugural event at the 1.10 lakh capacity, biggest stadium in the world built at a cost over Rs 800 crore. It is unlike anything that the US may have and carries the distinct imprint of the Indian prime minister’s thought process.

The government-both Centre and Gujarat- are pulling out all stops to ensure a one of it’s kind experience to US President Donald Trump in his re-election year when he visits Ahmedabad for three hours on February 24.A local newspaper has calculated the expenditure being incurred on the three hour visit at around Rs 115 crores or Rs 64 lakh a minute or a lakh per second.
If on the one hand, the head honchos of India’s corporate world are being lined up to mark presence at the world’s biggest 1.10 lakh capacity Motera stadium, on the other slums are being ordered evicted or put behind concrete walls to ensure a feel good for the distinguished visitor.

The US President and his wife Melanie begin their two day India visit from Ahmedabad on February 24 and  shall proceed from the airport to the Sabarmati ashram which was a key centre piece of Mahatma Gandhi’s struggle for India’s independence. Thereafter, accompanied by Prime Minister Narendra Modi they shall take part in an almost 20 km long mega road show that will lead them to the Motera stadium for an inaugural function replete with Indian corporate czars and cultural programmes.

The ‘kem chho Trump” later re-named as “Namaste President Trump” to give it a national appeal is a follow-up of the ‘Howdy Mody’ attended by Trump at Houston last year. Trump is on record stating that Modi has told him that millions will line up to greet him.

However, Gujarat’s three hours of American glory is a logistics nightmare for the state’s bureaucracy. With an advance party overseeing the security of US President Donald Trump laying down guidelines, the Gujarat administration is stretched to its sinews in compliance.

This is more so because Indian Prime Minister Narendra Modi wants the stadium packed to the brim of its 1.10 lakh capacity and the roads en-route to be lined thick and deep. Not one to leave anything to chance, he will be in his home state a night earlier to review preparations.
Over 2,000 buses have been requisitioned to put together the required numbers from all over the state, a journey that needs anywhere from one to eight hours of overnight travelling time to reach Ahmedabad at 7 am and then walk to the venue.

Since no food items, not even water will be allowed to be carried inside the stadium, arrangements have been made for 7 lakh water cups, 3 lakh buttermilk tetrapacks, a 25- bed hospital, a hundred toilets and lakhs of caps carrying ”Namaste President Trump” logo to be worn by the crowd.
In fact, invitations have gone out to a galaxy of corporate czars including Mukesh Ambani,Ratan Tata, Kumar Mangalam Birla, Gautam Adani, Sudhir Mehta, A.M.Naik, Pankaj Patel with 6,000 seats reserved for Indian trade and industry.

The downside of this event and road show is that all business establishments including shops and eateries along the route have been ordered shut for the duration of the visit and residents of residential enclaves directed to remain indoors.
The larger area of the US president’s route will witness an almost total shut down.

Those who would like to greet the passing President must submit copies of their aadhar card and mobile numbers duly verified by a bonafide office-bearer of the enclave which will then be exchanged for a police pass to be worn round the neck.

People lining up on the route as well as those attending the Motera stadium event have been strictly warned not to wear black or carry anything remotely resembling the colour ,not even handkerchiefs or dupattas as those sporting such apparel (construed as colour of protest) will not be permitted. The 25,000 police officers and men mobilised for the visit have been particularly warned to look out for any signs of protest.

The inordinately high expenditure being incurred on the event and the total exclusion of opposition leaders has understandably stirred up a hornets nest. The Ministry of External Affairs only added fuel to fire when it stated that the event was being organized by a ‘Donald Trump Public Felicitation Committee’.
Until February 20 there had been no signs of any panel nor any digital footprints with the government- both centre and state- directly in the picture. A day later the name of the Ahmedabad mayor Bijal Patel surfaced as its head. Speculation was rife that this was a way to avoid any scrutiny of the inordinately high and haphazard expenses being incurred.

Congress spokesperson Randeep Singh Surjewala was quick to question the origins of the group. When was the invitation extended to the US President and accepted? Why is President Trump then saying that you have promised him a grand event with seven million people? Why is the Gujarat government spending Rs 120 crores for a three hour event organized by an unknown private entity?

Former chief minister and Nationalist Congress Party (NCP) leader Shankersinh Vaghela calls it a waste of public money that would be better spent on building schools ,colleges and hospitals. ”He comes looking for votes of expat Indians in an election year and we involve ourselves in the politics of another country. Will this ensure a change in US visa policy towards Indians?, highly unlikely”.

For now, Modi seems least bothered, with his one-upmanship set for full display. Earlier Chinese President X Jinping, Japanese Prime Minister Shinzo Abe and Israeli Prime Minister Benjamin Netanyahu have been feted in Ahmedabad.
It is his show of strength to the US President ,says a BJP leader. ”Then why not do it in Delhi which is the country’s capital”, counters the Congress opposition. “Is it not ironic that the man who made Gujarati pride his election plank all the time is subjecting his own people to such ignominy in their own land just to impress a foreign head of state. What does this show’, asks another former chief minister. He sure has a point.
In an unprecedented move, perhaps for the first time in the history of the state the annual budget session of the Gujarat Vidhan Sabha is being postponed from February 24 to 26 to facilitate a foreign dignitary’s visit !