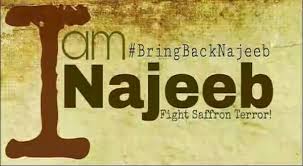 The National Alliance of People’s Movements condemns the criminal delay and silence of the Government of India, Delhi Police and JNU administration on the ‘disappearance’ of Najeeb Ahmad from 15th October, 2016 following a reported physical attack on him by members of the ABVP, widely known as the ‘student-face’ of the right-wing BJP. The deliberate defensive tactics, delay and gaps in investigating his ‘disappearance’ from the JNU campus, only confirm the allegations that the administration and police did not find it necessary to pull up the ABVP members immediately after the incident, so that Najeeb’s whereabouts could have been known long ago. The recent campus searches after 2.5 months of delay, with lie-detector tests and sniffer dogs, only after the Delhi High Court’s tough intervention is clearly a case of too little, too late, that too with no arrests being made and none of the prime accused actually interrogated, nor their houses and ‘addas’ searched..

Our heart goes out to Najeeb’s family and friends, particularly to his mother Fatima Nafees and sister – who have been facing this torture of waiting endlessly for their beloved Najeeb and have been braving the police, dharnas in the winter cold, with the hope that Najeeb would be back and fine. As the students rightly ask, when the police immediately swung into full action to arrest Kanhaiya Kumar, Umar Khalid and others what made them wait for 2 good months in this case? Why did the investigation not start from Day 1? At least, after the repeated demands, protests and repression on students? At least after Fatima Bi was ruthlessly dragged on the streets of Delhi?  The delay is inexplicable, criminal.

In the past 2 + months, the Delhi police (‘kathputhis’ in the hands of a right-wing sarkaar) did everything it could to quell the questioning of Najeeb’s whereabouts. The JNU admin’s soft-pedaling on ABVP is amply exposed by mere ‘admonition’ and simple hostel transfers and also by the brazen refusal of some of its members to even undergo the lie-detector tests, thereby committing contempt of court! Considering the extreme seriousness of the matter and the recalcitrance of the state apparatus and JNU administration, we urge the Delhi High Court to take up the case immediately (pre-pone the next hearing which is now due on 23rd Jan, 2017), summon and interrogate all the concerned ABVP students, some of who are on ‘vacations’ and take strict action, as required by law.

Sadly, the JNU VC and administration which is expected to be at the forefront to find out Najeeb seems to be moving in the opposite direction – refusing to even register an FIR and providing institutional impunity to the ABVP, coming down heavily on peaceful students’ protests, increasing ‘surveillance’, banning protests at Admin Block etc . We also condemn in the strongest possible terms the recent suspension of 12 students (most of who are from dalit, muslim, OBC communities) for questioning the various arbitrary measures in the University including fee hike and demanding revocation of an unjust UGC rule which makes ‘interviews’ the sole criteria for admissions. We fear that this pattern of the University criminalizing democratic student protests and shielding the law-breakers of the right wing is most ominous and dangerous for the intellectual independence of our higher schools of learning.

Najeeb’s case, which is another extension of Rohit Vemula’s is a stark reminder of the grim state of Indian University campuses, where the very safety and security of students, especially of those from the dalit, adivasi, minority communities as well as women and trans students is a constant source of concern, more so when they fearlessly hold and articulate progressive political opinions. NAPM stands in full solidarity with Najeeb’s mother, sister and the entire student community in these trying times and not only acknowledges their tireless and valiant questioning of “Where is Najeeb” ?, but hopes that we would find a positive answer to this question very soon and the culprits would be brought to book. This would, probably, be the best new year gift to Najeeb’s mother, who has been pining for him for the past 75 days and has even decided to begin an indefinite fast from 1st January, 2017 if Najeeb is not brought back.

National Team of Advisors, Convenors and Special Invitees of NAPM

#India - Bombay High Court raps Maharshtra for custodial deaths #torture #humanrights
Rap in Support of Soni Sori ,tribal teacher behind bars #Vaw #Raptivism #mustshare
Why do our children giggle through Sex-education and how it can be changed?
#India - Complaint to Chief Election Commissioner , violation of rights of disabled voters