Narendra Modi, a man with a massacre on his hands, PM of India ? #NOMOre_2014

It looks likely that Modi will be India‘s next prime minister. But his apologists can’t dismiss the facts about his rule as chief minister of Gujarat 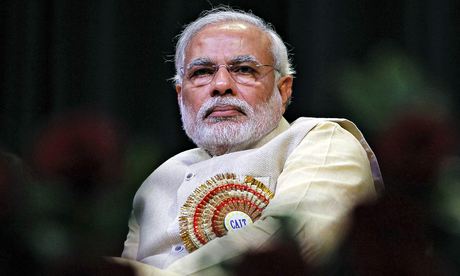 The world’s biggest election began yesterday: one in which more than half a billion Indians are set to turn out to vote over the next six weeks. Polls suggest that the Congress party will take an unprecedented pummelling – which makes Narendra Modi, leader of the Hindu nationalist Bharatiya Janata party, frontrunner to be India‘s next prime minister.

Modi bears a responsibility for some of the worst religious violence ever seen in independent India – but there’s nothing like looking like a winner to attract apologists. And the standard apology for Modi comes in two parts. First, there is normally an acknowledgement that the chief minister of Gujarat bears some vague responsibility for the orgy of killing and rape that engulfed his state in 2002 – but, um, wasn’t that all a long time ago? And hasn’t he behaved himself since – or, as the FT put it yesterday, done his best to “downplay tensions” between Hindus and Muslims? This is followed by pointing to Gujarat‘s rapid economic development and an appeal: shouldn’t the rest of India enjoy some Modinomics? Or, as Gurcharan Das, the former head of Procter & Gamble India, put it in a piece for the Times of India last weekend: “There will always be a trade-off in values at the ballot box and those who place secularism above demographic dividend are wrong and elitist.”

Given the enormity of the allegations against Modi, this is frankly pathetic. First, the Gujarat massacres have not safely been consigned to the past; whatever the claims of his supporters either in India or over here (such as the Labour MP Barry Gardiner who invited him to Britain last year), there has been no “clean chit” for Modi. Courts in India are still hearing allegations against him. And second, the much-talked about Gujarati model may have brought lots of money to the state, but it has ended up in relatively few hands, without yielding improvements in health, infant mortality, or even workers’ wages.

Let’s look at the carnage of 2002 first. On 27 February that year, a train coach carrying Hindu pilgrims caught fire in Godhra station in Gujarat. Fifty-eight people died. Within hours and without a shred of evidence, Modi declared that the Pakistani secret services had been to blame; he then had the charred bodies paraded in the main city of Ahmedabad; and let his own party support a state-wide strike for three days. What followed was mass bloodshed: 1,000 dead on official estimates, more than 2,000 by independent tallies. The vast majority of those who died were Muslim. Mobs of men dragged women and young girls out of their homes and raped them. In 2007, the investigative magazine Tehelkarecorded boasts from some of the ringleaders. One, Babu Bajrangi, boasted of how he slit open the womb of a pregnant woman.

When BJP supporters try to dismiss the pogrom of 2002 as ancient and contested history, what they are trying to erase is that epic, shameful violence. Other allegations have been made about Modi’s direct involvement in the carnage, but the ones I have listed above aren’t contested by any serious observer.

Now try this thought experiment. Imagine if, in the wake of 7/7, which killed 52 civilians, Ken Livingstone had not behaved with his commendable dignity, but had immediately blamed the tube attacks on jihadis; paraded the bodies up and down Pall Mall; and then declared a capital-wide strike. As Suresh Grover, the human-rights campaigner working for the families of three British citizens who were killed in Gujarat in 2002, puts it, he would have probably been arrested for wilful neglect of duty, hate speech and for inciting violence. Modi, by contrast, said a couple of years ago that he felt the same pain over the bloodshed as a passenger in a car that has just run over a puppy. He referred to the refugee camps set up to shelter some of the 200,000 Muslims who lost their homes as “baby-making factories”. And his minister for women is now serving 28 years in prison for murder and conspiracy to murder.

All of this is routinely summed up in journalistic shorthand that refers to the chief minister as being a “polarising” or “controversial” figure.

As for the so-called Gujarati development model, there isn’t one. The state has enjoyed growth but very little development. Under Modi, it has lagged behind the other major states in India in tackling infant mortality, in reducing poverty, and in increasing literacy. In 2006, there were even more undernourished children in Gujarat than in 1993, which Modi has claimed is because middle-class girls are “beauty-conscious”.

Big businesses back Modi, but that is because he gives them so much. As a string of reports from the independent Comptroller and Auditor General, among other bodies, points out, his administration has sold off public land dirt cheap to industrialists, provided companies with energy at below-market prices and given them loans at an interest rate of 0.1%. They in return have provided him with sponsorship and rides in their private jets. As Atul Sood, a professor at Jawaharlal Nehru University in New Delhi, has written: “The governance model of Gujarat is all about aggressive implementation of development on behalf of the big private investor. It is a model that works for the rich and against the poor.”

And this somehow represents an improvement for India.