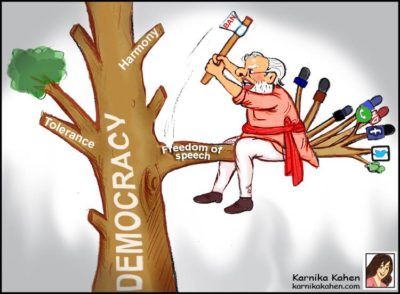 Recent news reports suggest that Prime Minister Narendra Modi has directed top security officials to work with state police to identify how non-governmental organisations (NGOs) that are allegedly involved in anti-national activities are funded. Officials suggest there is a fear that NGOs are participating in activities that are detrimental to national interest, supported by money from foreign sources. Is this paranoia? NGOs could range from a small 10-member organisation working in rural Madhya Pradesh on water conservation to a multinational outfit like Amnesty or Greenpeace India, which work on highlighting issues of human rights abuses and environmental violations across the world.

One way of looking at NGOs is to see them as performing the crucial function of bridging citizens to their governments and enabling them to hold governments accountable. Of course, it is important to recognise that western funding of NGOs is premised on these organisations bringing liberal democratic values to emerging democracies, and to date, NGOs in the Global South are overwhelmingly funded by the United States and Western European countries. The question is, how does this relate to sovereignty of a nation?

The argument goes that foreign powers are influencing domestic policy in India by pumping money into NGOs. However, “foreign” money today is ubiquitous, whether it is foreign direct investment in core industries, or the attempted retrospective legalisation of foreign funding to political parties through the Finance Bill, 2018.

In fact, the latter is far more damaging to the sovereignty of a nation because political parties participate directly in the electoral process, and therefore, the spectre of foreign interference in Indian democracy is realised with much more immediacy. Moreover, when the government is speaking of NGOs stalling development projects, what it conveniently forgets is that many of these development projects are themselves foreign funded — be it the Sterlite Copper Smelter owned by UK-based Vedanta Resources, or POSCO’s agreement with the Odisha government to mine iron ore in the Niyamgiri hills.

These foreign-funded projects often displace hundreds, if not thousands, of Indian citizens. When the same citizens turn around and protest, they are labelled foreign-funded and Maoists, terms which, in any other universe, could not be used interchangeably.

The Foreign Contribution Regulation Act, which is the primary legislation that regulates foreign funding of organisations based in India, was brought in by the Congress government in 1976. It has had the tacit approval of all governments subsequently, as a way of ensuring that funding to NGOs is fundamentally in the hands of the State.

Therefore, the Centre’s closed-door meetings do not result from a sudden paranoia, but rather from a well-established strategy of keeping NGOs on the shortest leash possible. As well-funded as NGOs may be, they are nothing compared to a government run by a political party seeking to legitimise foreign funding to itself. However, the larger question that remains unanswered: Who funds political change in India? The government may be conveniently focussing on only one aspect of this question.

The author is a legal researcher at Alternative Law Forum