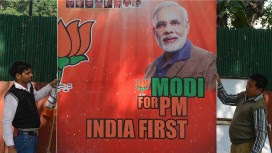 If you want the best case for Narendra Modi, you can do no better than read my colleague Gideon Rachman’s latest column – India needs a jolt. After a decade of prevarication under Prime Minister Manmohan Singh (to put it politely), India’s economy is languishing and investors have lost confidence in its reform story. Delhi is almost permanently mired in corruption scandal and politics has turned into a national joke. India desperately needs a change. Who better than Gujarat’s chief minister to give the subcontinent the decisive governance it craves?

That, in a nutshell, is the rationale much of India’s secular elites have backed themselves into. It is a counsel of despair. Mr Modi is certainly a decisive leader. In contrast to Mr Singh’s style of operating, which has been dilatory and weak, files rarely gather dust in Gujarat. Investments get swiftly approved. Projects are executed on time. And bribes are rare. Gujarat continues to outpace most of India in terms of its investment flows and per capita income growth. By electing Mr Modi, India’s middle classes hope he can transpose Gujarat’s story to the national level.
That is the hope. It should also be the fear. Much like Jekyll and Hyde, there are two sides to Mr Modi’s character. And the dark side is very dark indeed. In addition to presiding over its impressive economic performance, Mr Modi has killed the spirit of Indian secularism in Gujarat. The region of Mohandas Gandhi’s birth has become a shrine to Nathuram Godse, the Hindu nationalist who assassinated him in 1948. Twelve years after more than 1,000 Muslims were killed in one of India’s most brutal pogroms, Muslims are treated as second class citizens in Gujarat. Tens of thousands have fled the state altogether.
Mr Modi’s apologists point out that India’s Supreme Court cleared him of direct involvement in the 2002 riots. But absence of proof is not the same as innocence.
I was living in India in 2002 and remember very well the inflammatory rhetoric Mr Modi deployed on the day that 85 Hindu pilgrims burnt to death in a train fire in Godhra. The incident was immediately blamed on the Muslim tea-sellers who hawked their wares at the train station where the horrific accident occurred. A subsequent exhaustive government inquiry absolved the tea-sellers of any blame for the fire, which was thought to have been caused by kerosene.
Mr Modi did not wait for any inquiry. Just a few months before facing re-election in a contest he was by no means certain to win, Mr Modi seized on the Godhra incident to show how decisive he could be. Citing Newton’s Third Law: “Every action has an equal and opposite reaction”, Mr Modi gave the rioters the cue they needed.
No one, Indian or foreigner, who covered the following, gruesome, 72 hours, was in any doubt about the meaning of Mr Modi’s signal. For three days and nights, mobs of fanatics went from house to house armed with electoral rolls (to identify the religion of each household), dragged women and children out of their homes, poured kerosene down their throats and ignited them to crowds of cheering onlookers. The police in Ahmedabad and other Gujarati cities did not intervene. After 72 hours, the police intervened and the rioting stopped. Defenders of Mr Modi would have us believe that he lost control of his own police force. That would make him a weak leader, which contradicts his principal selling point. I do not believe that explanation. Six months later Mr Modi won re-election in a landslide. As he put it at the time, the Hindu majority had awoken.
Apologists also point out that Mr Modi has mellowed since 2002 and discarded the harsher sides of his communal ideology. They forget that he is a life-long member of the Rashtriya Swayamsevak Sangh, the quasi-fascist Hindu militant group to which Gandhi’s assassin also belonged. He is a life-long celibate in the cause of Hindutva – literally Hinduness – to which the RSS subscribes. Given Mr Modi’s reputation as a Hindu nationalist, he can afford to tack to the centre as far as he likes. He will never lose the Hindu nationalist vote. This is the risk India’s beleaguered secular classes are taking. They want the sunny Dr Jekyll and pray the nocturnal Mr Hyde has been put away for good. It is big bet.
For my part, I believe Mr Modi is a brilliant tactician who is saying and doing what it takes to reach India’s top job. After that, who knows? Apologists say he could never afford as prime minister to repeat the kind of communal hatred he has institutionalised in Gujarat, since he would head a coalition government that would quickly fall apart. They may be right. Deepak Lal, the distinguished Indian economist, asks whether Modi is a Margaret Thatcher or an Adolf Hitler. He concludes that Modi is probably a Thatcher. If so, as Gideon Rachman has rightly argued, a dose of Thatcherism is precisely what India needs. They may be right. I suspect they are wrong. Either way, I would rather not take the risk of finding out.