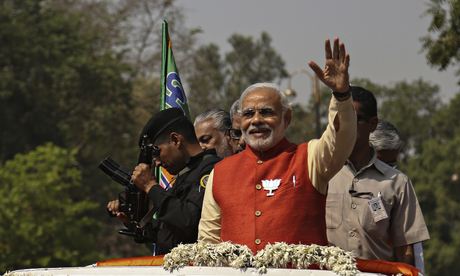 Novelist Salman Rushdie and the sculptor Anish Kapoor are among signatories of a letter expressing ‘acute worry’ at the prospect of Narendra Modi (above) becoming the country’s prime minister. Photograph: Divyakant Solanki/EPA

More than a dozen of India‘s most respected artists and academics – including the novelist Salman Rushdie and the sculptor Anish Kapoor – have written to the Guardian to express their “acute worry” at the prospect of Narendra Modi, the controversial Hindu nationalist politician, becoming the country’s prime minister.

Modi, the candidate of the opposition Bharatiya Janata Party (BJP), is currently leading all opinion surveys and many analysts believe he is assured of victory when results of the six-week phased poll are announced next month.

Tens of millions of Indians voted on Thursday in Delhi, the capital, and in volatile areas in the centre and east of the country where Maoist insurgents are active. Turnout has so far been high in one of the most bitterly fought elections for many decades. The Congress party, in power since 2004, currently appears headed for a historic defeat.

The letter to the Guardian, also signed by British lawyers, activists and three members of parliament, says that Modi becoming prime minister would “bode ill for India‘s future as a country that cherishes the ideals of inclusion and protection for all its peoples and communities”.

Modi’s supporters, who include many within India’s business community, see the 63-year-old politician as a decisive, honest and effective administrator who will reinvigorate India’s faltering economic development. Critics say he is a religious hardliner with authoritarian instincts who has adopted a moderate image to win power.

“The underlying worry is that Modi will move to a more and more Hindu state and that is a worry many people share and is not particular to those who signed the letter,” said Kapoor, who was born and brought up in India and now lives in London.

“The India I grew up in took a secular, pluralist view. The other [India] is partisan … Here is someone who knows how to galvanise the mythological part of our Indian psyche with potentially terrifying consequences,” he said.

The letter highlights “the role played by the Modi government in the horrifying events that took place in [the western state of] Gujarat in 2002.”

Modi was chief minister of Gujarat when a fire broke out on a train carrying Hindu pilgrims, killing 59 people. The incident, blamed on local Muslims, sparked widespread rioting across the state in one of the worst outbreaks of sectarian violence in India for decades. Government ministers later told parliament around 1,000 people, largely Muslims, had been murdered by mobs. The dead included three British nationals.

Modi has been accused of failing to stop the violence and even encouraging rioters. He has denied the charges and a series of inquiries have found insufficient evidence to substantiate the accusations against him. One of Modi’s close aides has however been convicted along with members of hardline Hindu nationalist groups.

The letter to the Guardian says Modi has repeatedly refused to “accept responsibility or render an apology.”

“Such a failure of moral character and political ethics … is incompatible with India’s secular constitution, which, …. is founded on pluralist principles,” it reads.

Senior officials of the BJP reacted angrily to the letter, with one saying the signatories were “people of profoundly leftist inclination who have been critics of the BJP since day one”.

“These comments are prejudiced, biased and some of these people have entertained a pathological hatred towards Mr Modi for years. The BJP has grown in spite of their opposition for so many years and the left has gone down in spite of their support because the people of India trust in Mr Modi and the BJP to save India from all ills that India is suffering,” said Ravi Shankar Prasad, deputy leader of the party.

Prasad said that despite a history of sectarian conflicts there had been no riots in Gujarat since 2002 while Muslims in the state had “the highest rate of growth in the country.”

“In a democracy, the people of India will decide. The motto of the BJP is “India First” and Mr Modi has said many times he represents all India’s communities and people,” Prasad said.

Rushdie was born in India’s commercial capital Mumbai but now lives in the US. Sale of copies of his controversial 1988 book The Satanic Verses is still forbidden in India. In 2012, an appearance at the Jaipur literary festival was cancelled after protests from Indian Muslim groups. The incident provoked fears for free speech in India and some criticism of the government.

Some in India fear a new and tougher cultural climate should the BJP take power, though senior officials have told the Guardian that such claims are scaremongering. The BJP has its origins in a broad movement which includes groups with a past record of attacking some of the country’s most eminent artists. Many were worried by the recent withdrawal by publishers Penguin of a book on Hinduism after legal challenges by rightwing organisations.

The British government ended a boycott of Modi by senior diplomats in 2012. The European Union and US have now ended their own boycotts, though a ban on entry to the US remains.

“I was very sad to see British parliamentarians extend an offer to Modi for him to talk [to parliament], and the Indian business community in the UK bend over backwards,” said Kapoor, who has been knighted in the UK and been awarded the Padma Bushan, one of India’s highest civilian honours.

Chetan Bhatt, a professor of sociology at the London School of Economics and a signatory of the letter, told the Guardian: “Modi perfectly embodies a callous, dangerous and authoritarian ideology that stands opposed to genuine liberal, democratic and secular values that founded the modern state of India.”

Others, such as the economist Patnaik, said they were worried by the support of major businesses for Modi. Jayati Ghosh, another respected leftwing economist and signatory to the letter said “corporate India has decided they want this man” to win a “watershed election”.

But Modi does appear to have won the support of large numbers of Indian voters, particularly among young people facing tough battles for good jobs.

“He will get things moving again,” said Rakesh Kumar, a 24-year-old taxi driver, shortly after voting in south Delhi on Thursday. “He can cut through all the problems like a knife. That is what we need here.”