“Narrative Breakthrough”: Is the Tide Turning on the Representation of the Palestinian Struggle? 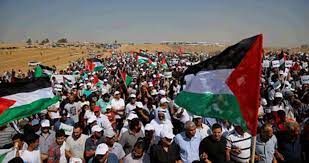 This time, it was different. Protests over Israel’s threatened forcible removal of Palestinian residents from East Jerusalem, followed by armed police storming the compound of the Al-Aqsa Mosque; rocket fire from Hamas in Gaza and the latest military onslaught on the Strip, formed a sequence of events that were reported with inputs from a much wider range of sources than in comparable episodes from the recent past. The result was a pattern of coverage, in many international media, which posed a serious challenge to the propaganda lines, elisions and suppressions that have kept the Israeli security state in a privileged position in public discourse over several decades.

The most prominent visual signifier of this shift came when the New York Times used its front page to display photos of all 66 children killed in the ten-day bombardment of Gaza. The paper followed up with in-depth investigations, exposing false claims by Israeli army and government spokespersons that targets for its bombs had any conceivable military role or value.

The NYT’s response symbolised what the Palestinian media analyst, Marwa Fatafta, called a “narrative breakthrough” in the coverage. Interviewed on the June 9th edition of Rethinking Palestine – a podcast from Al-Shabaka, the Palestinian policy network – she attributed a vital role to a new generation of Palestinian spokespersons now coming forward to be interviewed: “Young and intelligent Palestinian journalists, analysts and activists who are able to reflect and describe the Palestinian struggle eloquently and unapologetically”.

Being media-savvy, she told host Yara Hawari, they were also well-prepared to “avoid being ambushed by western TV journalists and presenters, asking questions in bad faith or out of ignorance”. Instead, they were able to ‘humanise’ Palestinians and remind audiences of the abrogation of their rights and freedoms.

International media representations constitute a significant arena because Israel’s actions contravene international law and international humanitarian law. To revisit familiar but vital points: UN Security Council Resolution 242 of 1967 calls on Israel to withdraw from occupied territories. The International Court of Justice advisory ruling of 2004, on Israel’s so-called security barrier in the occupied West Bank, confirmed it was an illegal land-grab.

The International Committee of the Red Cross, in a specially convened meeting in 2001, ruled that the Geneva Conventions of 1949 apply in the occupied Palestinian Territories. GCIV stipulates that anyone not taking a direct role in hostilities should be protected against indiscriminate and disproportionate military action. It also rules out collective punishments, at Article 33. That applies to the blockade of Gaza, especially as WikiLeaks revealed US diplomatic sources noting that Israeli officials briefed them on its true purpose “to keep the economy of Gaza on the brink of collapse”. And it states baldly that “an occupying power must not move any part of its population into the territory it occupies” – making the entire Jewish settlement-building programme a potential war crime.

The infractions of IHL are now to be the subject of a formal investigation by the International Criminal Court, and the timing cannot have been coincidental: Australia and the UK, two signatories to the Rome Statute which established the ICC, both indicated that they would disregard any outcome, just weeks before the sequence of events under discussion. A clear message of impunity was directly followed by further atrocities.

If the struggle for Palestinian rights and freedoms charts a course that depends, in part, on international signals and responses; and if media contribute to agenda-setting and the framing of issues in public discourse in an international context, thus feeding back impetus into audience meaning-making and source behaviours, then patterns of media representation constitute a significant arena for that struggle in their own right. So it is worth looking more closely at whether, how and how far these patterns are changing; asking how and why they are (if they are), and attempting to discern ways to shift them still further.

Of the distinctions in the Peace Journalism model conceived by Johan Galtung, the most fundamental is whether a conflict is reported in a “violence-oriented” manner, in “restricted space and time”, as a series of big bangs – or, on the other hand, “peace and conflict-oriented”, investigating “the formation of the conflict”, with “causes and solutions looked for everywhere, also in history and culture”.

When using Peace Journalism as the organising principle for the critical content analysis of news, therefore, mentioning the occupation of Palestinian territory is, so to speak, ‘first base’ for any journalism that even begins to open up these angles. For international media – given the apparent entanglement of outside conflict actors, in relations of cause and consequence – mentioning war crimes, as an analytical factor, should be considered another touchstone of good reporting.

Stretching back over many years, the record in international media, in these and other related respects, can only be described as dismal. In a study as long ago as 2005, originally published in the journal, Social Alternatives, I found:

The occupation and the conditions it imposes in everyday life are indispensable, in other words, to understanding the context [for acts of violence]… not only as history but as an ongoing reality of structural violence. And yet – using the Lexis-Nexis professional search engine, of 115 articles in UK print media, between August 19 and 21 of 2003, which included the name, ‘Jerusalem’, just 12 so much as mentioned either of the words, ‘occupied’ or ‘occupation’, as well (and one of the latter was a business feature about white-collar occupations being outsourced to Israel).

Results from another online search engine – Factiva, owned by Dow Jones – do at least begin to indicate that a change is underway, however, and may have been for some time. Data for this article were collected from three month-long periods: leading up to the respective ceasefire dates following the Israeli attacks on Gaza this year; in 2014, and 2008-9 (the so-called ‘Operation Cast Lead’). The search terms were Palestinians AND occupation AND war crimes.

On the three successive time periods, the numbers of ‘hits’ were as follows:

These results allow at least some scope for optimism. As to why there has been such a sharp uptick, at least some of the articles picked out by the search terms in the third of the three samples provide a clue, with references aplenty to the analogous struggles for Palestinian rights, and the campaign for Black rights in the United States and worldwide, touched off and inspired by the Black Lives Matter movement. So, for example, the Herald in Glasgow greeted the ceasefire announcement by commissioning an opinion piece from Joanna Blythman, titled “Palestine is having a George Floyd moment – and we have to pick a side”. The connection was further reinforced through interventions by members of the ‘Squad’ – women of colour who are Democratic members of the US Congress – which were also widely reported in the predominantly North American sources picked up by Factiva.

Discourse is both socially conditioned and socially constitutive, as Norman Fairclough and Ruth Wodak told us. Emboldened by the sense of movement, journalists themselves took action, with an open letter signed by hundreds of US-employed editors and reporters calling on the industry to now correct “decades-long journalistic malpractice”. The letter cites the report by the monitoring group, Human Rights Watch, finding that Israel is running a system of apartheid in its treatment of Palestinians. Specifically, it calls for such innocuous-seeming language as “evictions”, used when Palestinians are forced from their homes in occupied territory, to be scrapped, as it gives a misleading impression of a “real-estate dispute”, when what is actually underway is an act of systematic racist violence.

So far, so positive, then. Except: what has happened since the guns fell silent? The Washington Post marked that point with an article by a Palestinian writer, Jehad Abusalim, titled: “The Gaza cease-fire is no excuse for the world to look away”. That is the danger, and it replicates the risk that, when there is another outbreak of direct violence, it will once again be reported in misleading fashion.

My article for Social Alternatives drew on the material Annabel McGoldrick and I gathered on a trip to the occupied West Bank for our film, News from the Holy Land. It opens with two contrasting treatments of the same series of events, including a Palestinian suicide bombing in Jerusalem. The War Journalism version claims the incident “took place after a period of relative calm”. For Palestinians, however, there never is a period of calm – only the constant grind of ever-intensifying occupation and oppression.

Over the past six weeks or so, Palestinians in Sheikh Jarrah, the flashpoint for May’s sequence of violence, have come under attack by settlers, whose leader, Yonatan Yosef, told a TV interviewer:

“We take house after house. All this area will be a Jewish neighbourhood… we are not finish the job [sic], we are going to the next neighbourhood”.

Just last week, Israel’s Supreme Court upheld, by 11-10, the legality of the racist Nation State Law of 2018, which confirms two classes of citizenship: one for Jews, and second-class status for the rest. And a report published by Euro-Mediterranean Human Rights Monitor found that 91% of children in Gaza were left traumatised by the latest offensive.

None of these developments, by itself, evidently met the threshold for extensive coverage in international media: “threshold” being one of the “tuning factors”, determining newsworthiness, in the Galtung-Ruge study of 1965, ‘The Structure of Foreign News’, which gave rise to the Peace Journalism model as a remedial strategy for shortcomings in the reporting of conflict.

Instead, the flame is kept alive through alternative and social media. Professional journalism is beginning to reform itself just at the point where its influence is diluted, in today’s greatly extended and multifarious mediascapes. The Australia-Palestine Advocacy Network is one of many support and solidarity groups to seize the opportunity, to empower supporters to join the frame contest over the Palestinian struggle, by topping up their skills and activity levels in this way. They are running social media training sessions later this month.

“There has never been a better time to speak out for Palestine”, APAN say, in their online ad for the sessions – and now there are many ways to get the message out in what the communications scholar, Manuel Castells, was first to call (in 2007) the “new media space” constituted by “mass self-communication” – a space in which, he averred “power is decided”.

While the sinister developments listed above were rumbling on, the steady drip-drip effect, of making and circulating meanings, was continuing, gradually draining the apartheid system and the occupation of legitimacy. Thirty years after the Madrid Conference, which led to the well-intentioned but ultimately disastrous ‘Oslo Accords’ bringing the Palestine Liberation Organization under Yasser Arafat back from exile in Tunis, Norway’s biggest pension fund announced it was divesting from companies linked to Israeli settlements on Palestinian land.

Jake Lynch is based at the Department of Peace and Conflict Studies of the University of Sydney, after completing a Leverhulme Visiting Professorship at Coventry University, in the UK, in 2020. His debut novel, Blood on the Stone: An Oxford Detective Story of the 17th Century, is published by Unbound Books. Jake has spent 20 years developing and researching Peace Journalism, in theory and practice.