No one really believes NCRB data as credible when it comes to farmer suicides, not even the NCRB.
Devanik Saha, IndiaSpend.com  ·

With 25 farmers in Karnataka committing suicide in June, it appears evident that rural India is in distress – the long-term cause, a growth rate of almost zero (0.2%), and the immediate cause, crop failures caused by two years of unseasonal winter rain.Crop failures = farmer suicides.

That’s a familiar equation. But as rural distress grows, farmer suicides dropped 67% over five years to 2014, according to the latest data released by the National Crime Records Bureau last week.

The data confound the familiar equation and raise five questions, the answers to which provide some explanation of what’s going on.

Could the NCRB data be wrong?

No one really believes NCRB data as credible when it comes to farmer suicides, not even the NCRB.

The number of reported farmer suicides decreased 67%, from 17,368 in 2009 to just 5,650 in 2014, according to the NCRB.  In 2014, farmer suicides constituted just 4.3% of total suicides in India, compared with 9% in 2013. This happened because the NCRB changed its data-collection process, and classified farm related suicides under two categories – farmers and agricultural labourers.

“The report of NCRB is nothing but a hoax because it has [been] fabricated to show fewer deaths as the distress level on the ground is much higher,” Vidarbha Jan Andolan Samiti president Kishor Tiwari said, according to this Business Standard report.

He further added that NCRB has listed all landless tribal farmers and leasehold tenancy farmers as agricultural workers and rural suicides cases have been classified as part of the ‘Others’ category, which has put a question mark on the report’s credibility. 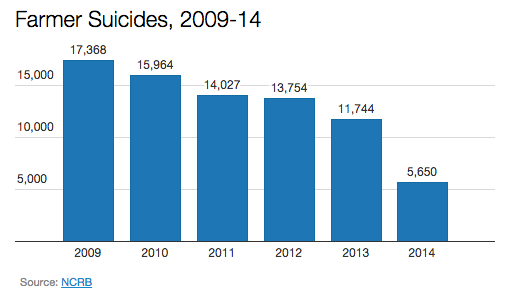 “NCRB figures cannot be trusted at all,” said Patel. “They are massively biased since reporting suicides require proper investigations, and, hence, the process of collating the figures is highly flawed,” said Patel.

“The critical aspect regarding the NCRB data is that at the aggregate level, the data are underestimates,” said Mishra, who has worked extensively on farmer suicides.

When IndiaSpend asked an NCRB spokesperson, he agreed the suicide data were suspect.

“We do have limitations in terms of collecting suicide data, as we completely rely on data collected from police stations in states,” said Akhilesh Kumar, NCRB’s chief statistical officer. “There is not much we can do about it. For the 2014 report, we have tried to revise our proforma and include a little more detailed analysis on profession-wise suicides.”

In May, this correspondent witnessed how the complexity of the suicide-cause-compensation reporting cycle can skew data. In the backward Banda district of Uttar Pradesh’s Bundelkhand region, I reported the story of a man who attempted suicide because he was not given compensation for two years over crop losses. He was stopped from killing himself by district officials, who promised compensation within three days. Within two days, he was handed a compensation cheque.

The problem was the man who attempted suicide did not appear to be a farmer, according to the district magistrate, who cleared the cheque. The man was apparently drunk when he attempted suicide, but given the publicity and political sensitivity around such incidents, the administration hastily handed over the money. In official data, the compensation has been paid, and a suicide attempt recorded.

Are suicides really declining as agriculture spirals into crisis?

This is unlikely. In general, farmer suicides are vastly under-reported, with many states – almost overnight – claiming no such incidents, what is called as a zero-reporting contagion.

“There has been an upward trend in cases of farmer suicides in Maharashtra, Telangana, Karnataka and Punjab recently, besides reporting of instances in Gujarat, Uttar Pradesh and Tamil Nadu,” said a December 2014 Intelligence Bureau report, quoted in The Times of India, contradicting NCRB data.

There are three reasons for under-reporting:

First, a suicide by a farmer is classified as such only if the farmer’s name is on the land title. That leaves out farmers whose land title is in their fathers’ names, said Maitreesh Ghatak, a professor at the London School of Economics.

Second, female farmers are considered “farmer’s wives” (by custom, land is almost never in their names). “This classification enables governments to exclude countless women farmer suicides,” said P Sainath, Magsaysay award winner who pioneered farm-suicide reporting in India. As IndiaSpend and Khabar Lahariya reported, there are about 36 million female farmers in India, and they are in crisis.

Third, some states – implausibly – report no farmer suicides, as the NCRB data note. 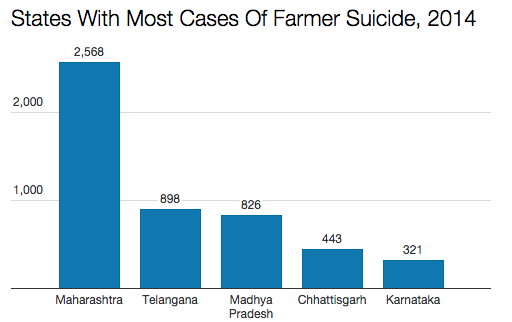 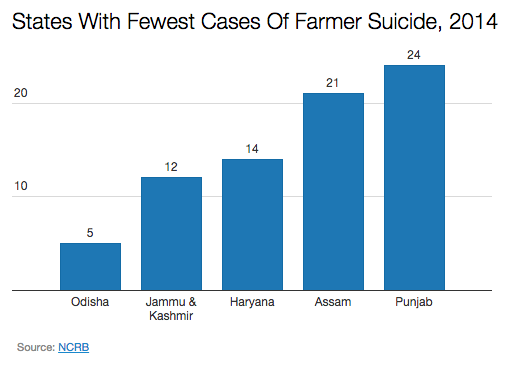 In 2014, Chhattisgarh reported 443 farmer suicides, the fourth highest among states.

However, Chhattisgarh’s agriculture minister, Brijmohan Agarwal, called the NCRB data “misleading and based on a wrong analysis”. He said, according to this report in The Hindu : “These numbers are wrong, and there are no such incidents in Chhattisgarh.”

The zero-reporting contagion appears to have only spread, as the latest data released last week revealed.

Uttar Pradesh, the most-populous state, reported just 63 suicides in 2014, but the official data on farmer suicides is dodgy, as IndiaSpend reported.

What, then, are the real reasons for farmer suicides?

If, as the IB report noted, farmer suicides display an “upward trend”, and, as some experts suggest, the causes for these suicides go beyond indebtedness, why do farmers kill themselves? 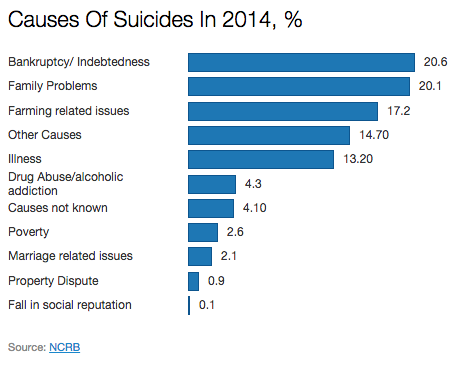 However, attributing suicide to a single reason is too simplistic.

“Suicide is a complex process,” said Patel, the psychiatrist. “It arises out of an amalgamation of factors, hence, we cannot attribute a single reason for suicides.”

Indebtedness is indeed an issue, but crop failure isn’t the only reason that leads to it, contrary to what media reporting and political reaction lead you to believe. Healthcare and education costs and personal expenditure (marriage costs, mostly) contribute significantly to a farmer’s indebtedness.

Outstanding loans for health reasons have doubled from 3% in 2002 to 6% in 2012, according to data from the All India Debt and Investment Survey 2013, released earlier this month by the National Sample Survey Office. The data further revealed that loans for farm business fell by about half over a decade, from 58% in 2002 to 29% in 2012.

The rise in borrowings for health reasons has become a significant factor in the lives of farmers because they lack savings, and government healthcare is substandard. So, farmers borrow to pay bills at private hospitals. More than half of India’s rural population uses private healthcare, which is four times as costly as public healthcare, and can cost those in the poorest 20% more than 15 times their normal monthly expenditure, according to the latest NSSO data.

India spends only 1.3% of its GDP on healthcare and faces a healthcare crisis, especially in rural areas. This crisis is likely to be aggravated due to a reduction in the healthcare budget, as IndiaSpend reported.

“In all the farm households I’ve visited, where people have killed themselves, the single largest component of family debt was health costs,” said Sainath, the journalist.

The IB report does not acknowledge healthcare at all. It blames “rising farmer suicides on an erratic monsoon (at the onset stage), outstanding loans, rising debt, low crop yield, poor procurement rate of crops and successive crop failure (sic)”.

Do loan waivers, compensation for crop-losses and other aid help farmers?

Loan waivers are not relevant to farmers who borrow from private moneylenders. This was a view echoed by all the researchers IndiaSpend spoke to, as well as the IB report.

The larger issue is declining farm livelihoods. “The development discourse and public policy have to move out from piecemeal approaches that get reduced to income or yield,” said IGIDR’s Mishra. “They have to have a livelihood and quality-of-life focus.”

“Despite state-specific differences, a common thread running across the story of suicides is the adverse implications on the livelihoods and the quality of life of farmers and their families,” he said.

The new NSSO data substantiate his point. The average surplus income (income minus consumption) of an agricultural household was Rs 2,436 per annum (Rs 203 per month) in 2012-13, which means that a farmer rarely has savings. 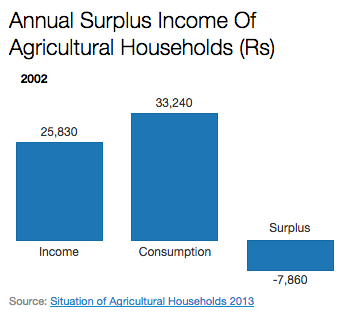 With livelihoods so imperiled, suicides are likely to grow. But aside from the reasons we have listed, there is another complicating factor: Media reportage of suicides.

The risk of imitative suicide is the highest during the first three days of reporting and levels off after about two weeks, said the study. Educated people, who have greater access to the media, are at greater risk.

There are several regions in India, such as Vidarbha and Bundelkhand, which gain notoriety for widespread suicides. There is evidence to suggest that the farm-suicide outbreak in India could indeed be a contagion, where farmers are committing copycat suicides, said a paper by Ravi, the Brookings India fellow.

“There is evidence that students get influenced by social media and commit suicides, but no such study has been conducted for farmers. However, we can generalise across demographics and conclude that media reporting does play a role (but not the only role) in triggering farmer suicides,” said Patel.

Currently, there are no national guidelines for reporting suicides in India by media houses, which often leads to irresponsible reporting, aggravated by pressure for ratings and readership. Globally, very few media organisations have in-house training for reporting on suicides.

Headline, a media-monitoring programme in Ireland, works to promote responsible and accurate coverage of mental-health and suicide-related issues within the Irish media.

“We use two media monitoring agencies and monitor about 35,000 articles annually and store the information in a database and analyze the articles against media guidelines,” said Jane Arigho, Media Project Coordinator, Headline. “We have created our own media guidelines and put them into a multimedia resource to assist media professionals and students.”

This article was originally published on IndiaSpend.com, a data-driven and public-interest journalism non-profit.