NDA govt the most anti-farmer in India’s history 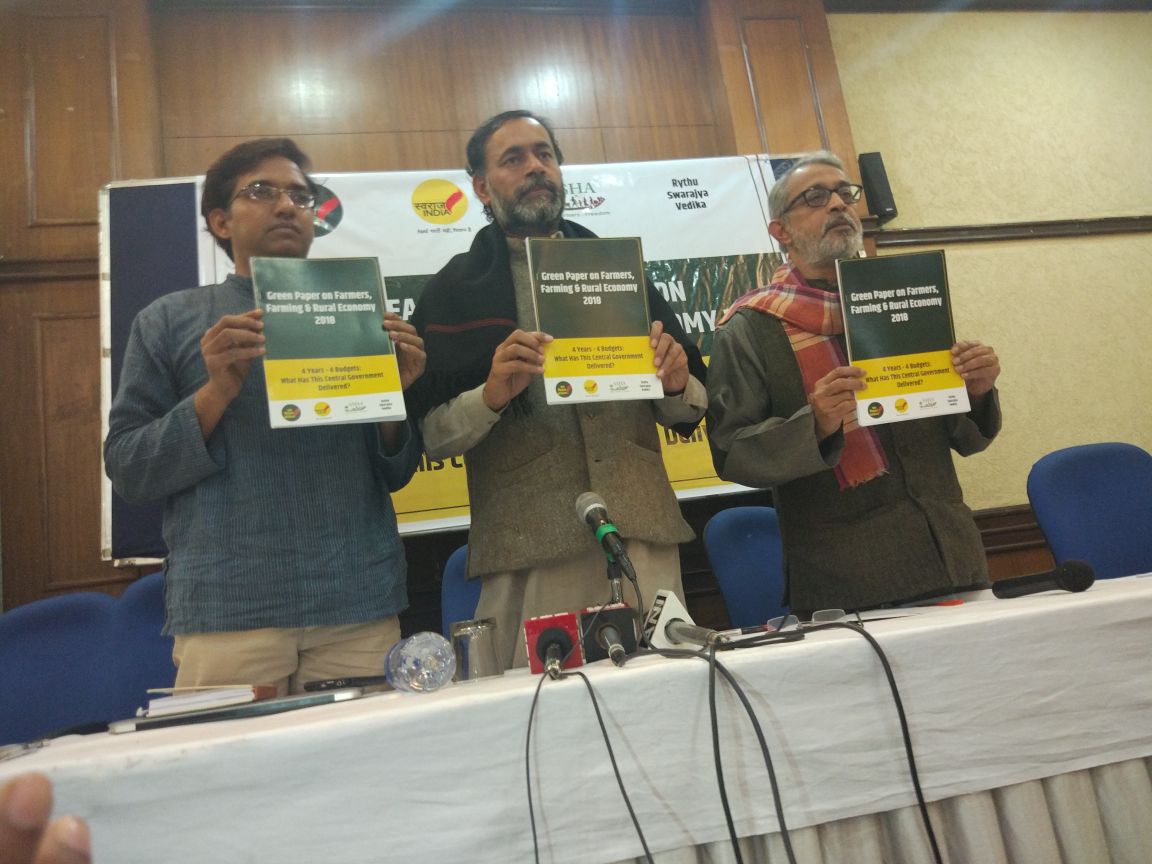 A large part of the agrarian crisis can easily be attributed to the NDA government’s policies, said Yogendra Yadav, leader of the Jai Kisan Andolan

‘Green paper’ says Centre has not helped farmers in crisis; net returns at MSP in last four years much lower than under UPA-II

Farmer groups on Tuesday termed the incumbent National Democratic Alliance (NDA) government at the Centre the most anti-farmer in the history of independent India and said its budgetary announcements were just grandstanding, with little action or money to back them.

Bringing out what they called a “green paper” on farmers, farming and the rural economy, the groups, including Jai Kisan Andolan in New Delhi and Rythu Swarajya Vedika in Hyderabad, said that during its four years in power, the NDA government demonstrated a lack of will to stand with farmers in the face of the growing agrarian crisis.

The organisations also listed 12 acts of omission and commission by the government that they said worsened the plight of farmers. Top among them was reneging on its promise of revising MSP (minimum support price) on a cost plus 50 per cent formula.

Not only was the formula not implemented, it was solemnly affirmed in the Supreme Court that it was unworkable, said Yogendra Yadav, political scientist and leader of Jai Kisan Andolan.

The cost of crop cultivation is underestimated at present. In 2015, the Ramesh Chand Committee came out with a better recommendation for cost estimation. The government is yet to accept it, even though Chand is now a Niti Aayog member looking after agriculture.

“This actually shows how seriously the government is looking at the problems of farmers,” said Kirankumar Vissa of Rythu Swarajya Vedika.

“Initially, this government made a determined bid to dismantle the MNREGA scheme. When the attempt was foiled by public opinion and the Supreme Court, the government has choked the programme of adequate and timely funds,” Yadav said.

The government, far from increasing public investment in agriculture, failed even to maintain existing levels. It actually passed on the burden of expenditure to State governments, leading to an overall decline in public expenditure in agriculture in GDP terms, the document said.

Similarly, the government shifted the debt-relief burden to States, which are doing a shoddy job of the loan waivers announced, it said. “This is despite the fact that much of the agrarian crisis can easily be attributed to the Central government’s policies,” Yadav said.

“This makes the betrayal of the promise by Modi all the more blatant, because the crux of his argument (before the 2014 elections) was that the net returns of farmers were low during UPA and needed to be raised significantly,” the document said.

The farmer groups also placed a charter of 10 demands before the Finance Minister, who is presenting the Union Budget on Thursday. They include better MSP for all crops, an agricultural debt relief package of ₹2,00,000 crore, constitution of a permanent statutory Farmers’ Income Commission and setting up of disaster mitigation fund of ₹25,000 crore.