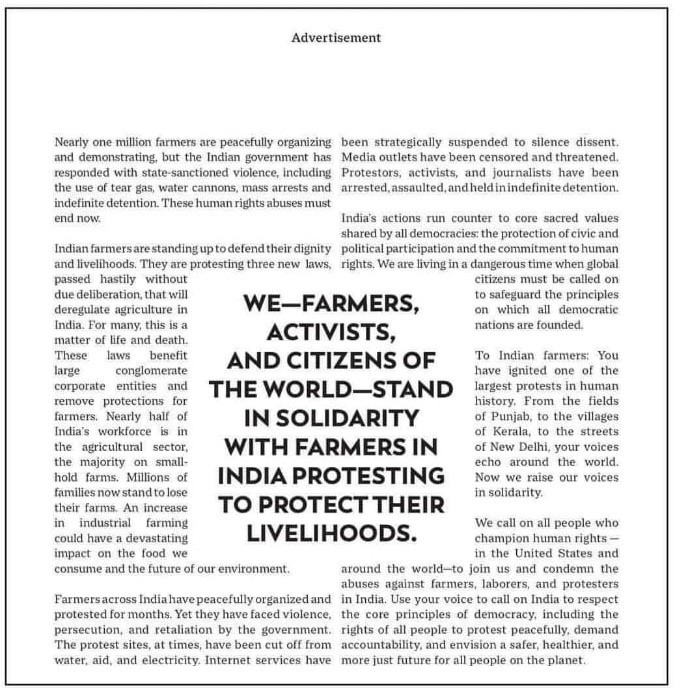 Demanding that the human rights abuses must end, the advertisers alleged that the Indian government has responded to peaceful protests with alleged state-sponsored violence by using tear gas, water canons, arrests and detentions.

“For many, this is a matter of life and death. These laws benefit large conglomerate corporate entities and remove protections for farmers,” the advertisement claimed, adding that millions of farmers now stand to lose their farms.

ad which appeared in The New York Times, February 16, 2021, in solidarity with Indian farmers, with the original signatories.
“As many as 75 Organizations placed a one-page advertisement in the prominent international daily the ‘New York Times (NYT)’ on February 16, 2021 to stand in solidarity with the Indian farmers as they continue their protest for their livelihoods.

“Justice for Migrant Women is proud to demonstrate our solidarity with the farmers’ protest, alongside more than 75 like-minded organizations across the US and beyond,” said Mónica Ramírez, Founder and President of Justice for Migrant Women. “India’s response to these peaceful demonstrations run counter to the fundamental values shared by all democracies — among them freedom of expression, protest, and the press, as well as the fundamental dignity of all people — and it is time that we all lend our voices to speak against this unjust treatment with those who are fighting for their lives and livelihoods.”