As the #MeToo movement entered its seventh day in India, women in the media continued to name and shame predatory behaviour in newsrooms. One of the most recent cases in which an organisation’s head was called out by a few employees is that of Stalin K. Padma, one of the founders of popular community media platform, Video Volunteers (VV).

At least two women, who have worked with VV, narrated similar stories about how Stalin touched them inappropriately and, on sensing a lack of reciprocation, remained casual in his demeanour, forcing the women to doubt their discomfort.

First to narrate her story about Stalin is a 22-year-old woman who interned with VV between April and May last year. In her account, she said that there were fleeting moments during her internship when she felt uncomfortable with Stalin trying to be “touchy-feely”. However, she let such incidents pass by, normalising such behaviour from a person she looked up to as her mentor until her last day at the office when Stalin asked her out for dinner at his home and used the meeting to sexually harass her.

“He took me to his home for dinner and he was the one who was supposed to drop me back to the office, where I was staying. I was interning in a city I knew no one in. When he suggested staying behind, I made an excuse. He asked again. This time I agreed, thinking it was safe to stay over. But then when we were watching a movie on TV, he began touching and stroking my face, arms and knees. I did not respond at all. I froze. All I can remember is extreme discomfort,” she said.

“Even when he asked ‘Are you okay, sweetheart?’, I just nodded, even though I wanted to get out of there. I don’t know why I’d just nodded. Somehow, I managed to get up to go to the bathroom and, upon coming back, insisted on not sleeping in his room. I slept in the guest bedroom that night, and the next morning, he behaved like everything was fine. He hugged me good morning, then hugged me goodbye. I was so confused by that behaviour that even though my bodily rights had clearly been violated, I was questioning my own discomfort,” she said, adding that she got her strength to call Stalin out from the #MeToo movement.

Speaking to The Wire, the complainant, who wanted to remain anonymous, said, “I decided to put his name out because I don’t want any other intern to go through what I had to.”

She added that she approached the ICC informally but did not want to file a formal complaint because of her preoccupation with course work at the Tata Institute of Social Sciences (TISS), where she was a student at the time. She, however, made it clear to the ICC that she did not want Stalin to contact her at all in case the ICC wanted to raise the issue with Stalin. As she got back to her university, she chose not to follow up on the matter.

She also said that until the last day at the office where she felt distinctly harassed, she had resolved Stalin’s “constant physical touching” as part of his “free-spirited” nature. “I remember a Danish intern clearly felt that I was being sexually harassed at office but at that time I chose to ignore that, giving the benefit of doubt to Stalin,” she said.

When she outed Stalin’s name, the School of Media and Culture Studies at TISS, of which the complainant is an alumna, came out in support of her and decided to cut all associations with VV and Stalin. The university also decided to “ensure that no internships or placements take place in VV” from the campus.

Soon after the first allegation against Stalin was put out on social media, a current employee of VV, who requested not to be named, gave out her version of harassment which sounded eerily similar to the first complainant’s experience.

“I was near the backyard when he (Stalin) came there to smoke, this was in the evening and most people had left office (I was staying in the office guestroom at that time). He called me to see a bird on a tree, I couldn’t see any bird even if there was one but he kept rubbing my back trying to bring me to a place from where I could see the bird. Eventually, I got uncomfortable and (said) yes I see the bird. I pushed the incident away thinking that he is just outgoing and informal, while I am generally averse to touch. But over the months, I did feel uncomfortable at meeting where his gaze often seemed to be on my breasts or legs. Then, at two different birthday celebrations in office, he touched me inappropriately again,” she said, narrating how he to her shock touched her “bare thigh” in one of the office conversations.

While speaking to The Wire, she said that there were multiple women at VV who have discussed Stalin’s harassment stories quietly among themselves but have somehow restrained themselves to take any action out of respect for their organisation. She, too, informed about her harassment to the ICC but only informally to guard her identity as she did not want her name to be disclosed. She said that the ICC warned Stalin not to repeat such behaviour and informed her about its action.

“For most of us who come to this organisation without the knowledge of Stalin’s predatory behaviour, he is a very respectful figure. That is the image. VV generally is a very informal space. When he keeps hugging you and patting you, you feel that perhaps this is the way he functions until his behaviour gets completely uncomfortable for us,” she told The Wire.

Subsequently, more women, choosing not to disclose her names, came out to share their harassment stories at the hands of Stalin, drawing further attention towards the “toxic” work environment at VV.

I know of at least two people personally who interned/worked with him, and who shared with me how he approached them in a way that was completely unwelcome. Almost 12 years apart! The story in the screenshot attached pic.twitter.com/tICmom7mCw 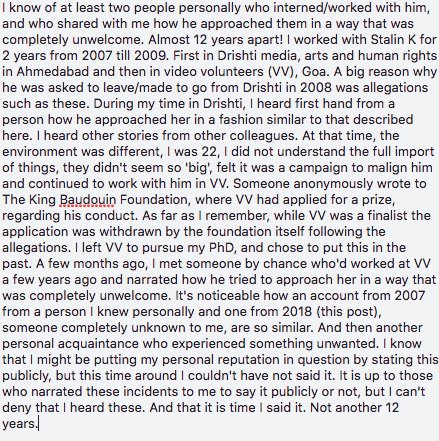 I know of at least two people personally who interned/worked with him, and who shared with me how he approached them in a way that was completely unwelcome. Almost 12 years apart! The story in the screenshot attached

I was working in another Human rights based organisation in Ahmedabad in 2008. He used to visit our office regularly and I was warned of his predatory behaviour and to stay away from him by female co-workers. I have sent an email to ICC at VV.

One of the former employees of VV, Tania Devaiah, said that although she never had to bear the brunt of such behaviour when she was working with the organisation, she came across several instances where women clearly sensed discomfort in the presence of Stalin. Stalin, Devaiah alleged, claimed to “desexualise touch” as part of his ideological positioning but actually used this as the head of VV to put his subordinates through his unwanted passes and create room for his “touchy-feely” conduct at office.

Interestingly, all the women had been and continue to be great admirers of the work the VV has been doing and that restrained them from sharing their experience earlier until #MeToo gave them a fillip.

Meanwhile, Stalin, a well known activist, documentary filmmaker, and one of the pioneers of community media in India, denied the charges made by the first complainant. He said he neither remembers the incident not believes “it ever happened”. He also added that he was ready to face an inquiry into the multiple complaints that have come against him.

Here’s a brave young woman’s account of what she faced at the hands of @stalink . A man who once said he wants to “desexualise touch”. I just realised thats called “grooming”. More are being shared in whispers . But for now #TimesUp cos we know. And you know.

The committee has already put out a statement, saying the committee “has taken full cognizance and has initiated suo moto inquiry into the matter”. It added that it has noted all the testimonies and has already initiated the due process.

“In recent days, allegations of sexual misbehaviour have been raised against Video Volunteers’ director Stalin K. The organisation has always, and continues to have a zero tolerance policy towards sexual harassment. We know and acknowledge that it takes great courage to speak out,” the statement said.